Some chapters are better off lost

I was going to open this by saying SAGE Day 3 keeps on trucking, but in actuality, this is SAGE’s 4th day, I believe. I dunno. Either way, I’m on the mend, and there’s fangames to play. Normally, as writing fatigue sets in, I find myself writing less about games – but it appears I’m actually starting to write more! Yeah, I don’t know what’s up with that either. 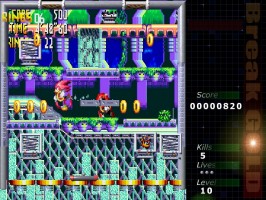 I don't even know what's going on.

Chaotix CD
Well, here’s an… interesting entry. Rather than try and make a platformer, or, really, anything formally resembling a character-based game, Chaotix CD is a table pack for “Break Gold“, a Breakout/Arkanoid game for PC and smartphones. On its own, Break Gold seems to be a pretty decent conversion of that sort of “ball and paddle” game, with all of the typical amenities one would expect – break blocks for power-ups, including multiball and so on. Chaotix CD attempts to convert Break Gold in to something of a Sonic game, with backgrounds, music, and even stage gimmicks from Sonic CD and Knuckles Chaotix. Except that… I’m not sure if it’s because I’m using the free demo version of Break Gold or what, but Chaotix CD seems to be kind of broken. I occasionally get errors regarding custom content not loading correctly, graphics are a stretched out mess, some stages seem literally impossible to lose (such as the one pictured), and the brick layouts themselves just seem nonsensical. Against screenshots of the games they’re meant to represent, it’s also super difficult to tell what your ball is supposed to collide with and what it’s supposed to pass through. And then there’s the somewhat confusing install process (the install instructions mention a “User Levels” folder that did not exist in my version, so I had to create it myself – perhaps that explains some of the content errors). Unfortunately not worth the effort. 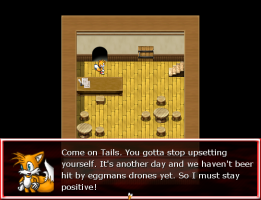 Aren't you a little young for beer?

Sonic Arena: The Lost Chapters
If you recall from last year, Sonic Arena was a top down, 2D massively multiplayer online RPG. My character, “Hamburger the Hedgehog”, couldn’t even make it out of the starting area because a quest where I was tasked with giving a gold ring to Sonic to get a key was broken. This time around, they eschew the MMO format for a singleplayer RPG made in RPG Maker. On the plus side, this probably contains the most content out of any RPG Maker game I’ve seen at SAGE. Unfortunately for The Lost Chapters, very little about it is actually compelling. The game centers around the death – or perhaps simply the disappearance – of Sonic the Hedgehog. You play as Tails, six months after Sonic’s disappearance. We’re not told how old Tails was when Sonic “disappeared”, but apparently Tails is old enough that he runs his own Inn. Much like Sonic RealmZ, The Lost Chapters ambitiously aims for the stars, with a fully voiced narrator and a pretty significant focus on plot. Unfortunately, the plot doesn’t really seem to be very well written, and is loaded with weird typos and ridiculous leaps in logic – for example, upon entering a random building (apparently his old Workshop, but the text for that doesn’t display at first because of a bug), Tails tells us that “he never gets tired of coming here”. Trying to use the only other door in his workshop results in Tails whining about not wanting to open the door because he doesn’t want to re-live painful memories. But I thought he never got tired of coming here? So he never gets tired of being afraid to open this door, then? The game also comments on the typical convention of RPG heroes barging in to everyone’s homes and looting their chests for items – Tails informs the player that he won’t enter random houses of strangers he doesn’t know. Except that, on the other side of the same village, you’re totally allowed to walk in to any home you want, and a character living in one of these houses even scolds you for doing so! The game is full of weird little unexplained inconsistencies like this, not to mention gameplay bugs, graphics hiccups and more. Unless you really happen to like retro RPGs, you’re probably better off skipping this game. 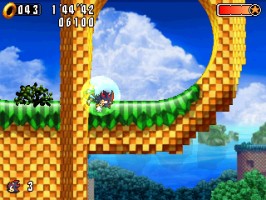 Sonic Fusion
Sonic Fusion is another one of those fangames it feels like I’ve been playing at SAGE for quite a long time – at least three years, if not more. And every time it shows up, there’s a little bit more to play. That’s fine, I guess, but at some point you just have to put a bow on it and call the project done, don’t you? You can’t keep tweaking and adding content forever. Which is what’s so baffling to me – Sonic Fusion is still being pitched as a demo despite containing three playable characters, a story mode, 8 stages, side missions, and online multiplayer. There can’t be much left to do, right? Perhaps the problem with Sonic Fusion is a matter of polish – after all, I eventually gave up playing Story Mode after I finished “Carnival Speedway” as Sonic and the game froze at the score tally, refusing to move on to the next cutscene/boss. A couple of other bugs also reared their heads here and there as well, like accidentally visible collision masks in Metal City. Regardless, with a game this heavy with content, one has to wonder why you would even release a demo at all – there’s a whole game’s worth of stuff to do here. One or two more levels on top of the eight existing stages is going to seem rather piecemeal when everybody’s played 75-80% of your content already. I almost feel like I can’t accurately judge the quality of Sonic Fusion anymore because I’ve played so much of it over the years. I guess it’s pretty good, and outside of Sonic Axiom, it’s probably the most feature-complete game at SAGE this year… so give it a look? 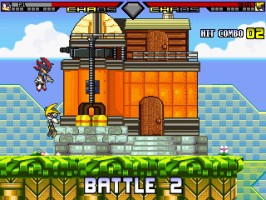 Mama said knock you out

Super Sonic Knockout
Last time I played Super Sonic Knockout, the game was difficult to understand. I recall getting pinned in the corner by an A.I. opponent, unable to come to grips with the controls and break free of the computer’s relentless assault. This time around I found the game’s lengthy tutorial quite handy at teaching me the basics of how to play the game and actually managed to survive for quite a while. I’m actually sort of surprised at how professional and polished Super Sonic Knockout feels – an obvious riff on Sonic Battle, what’s here is very polished and easily understood. Unfortunately, they miss one key important feature that I try and drill in to everybody’s heads: gamepad support! Super Sonic Knockout doesn’t have native gamepad support, requiring me to fire up a program like Joy2Key or Xpadder in order to use the control method the game itself feels like it was originally designed for. The other problem is that the game itself feels kind of slow – part of the reason I got so frustrated with Super Sonic Knockout originally is that hit stun feels like it lasts forever and it definitely still seems to be the case. That, coupled with the fact that when you’re “knocked back” and sent careening through the level, you do so at a rather leisurely pace. It feels pretty weird to take what is quite obviously meant to be a “hard” hit and see your character very, very slowly recoiling across the map. That definitely needs to be improved. Still, there’s a rather remarkable amount of depth and polish to be had in this game, so if you’re in to fighting games and really wished Sega would’ve made Sonic Battle 2, well, this is probably right up your alley. Don’t miss out. 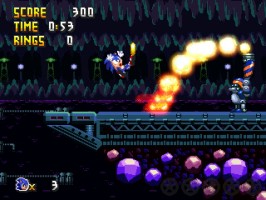 Madcap Grotto
A zone planned for the Sonic Worlds Level Collab, Madcap Grotto shows a level of engineering and ingenuity that’s rare in a Sonic fangame. The real star of the show here are enemies, which are multi-part creations often with complex attack patterns that extend beyond Sonic‘s usual “see player, try to run in to player”. The level itself is also expertly designed, with plenty of unique stage gimmicks that set it apart from the pack. It’s a shame that this is the only level DimensionWarped is contributing to the Level Collab, because Madcap Grotto is sure to be one of the star entries. Honestly, now that he’s no longer a part of the Sonic Nexus project, I’d like to see DimensionWarped do an entire game, because he’s obviously got a lot of creative ideas about enemy and level design. The stage even includes its own boss battle, which is full of extremely impressive psuedo-3D effects that would’ve made a Sega Genesis blush. Sure, it may only be a one act “demo”, but you owe it to yourself to check out Madcap Grotto right this very instant. 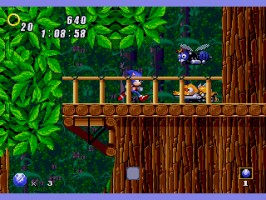 I wonder if Yoshi gives you a useless triple jump in this, too

Sonic 2 Retro Remix
I could have sworn that Sonic 2 Retro Remix was a finished product at SAGE 2010 last year, but here it is again. I could have also sworn that S2RR had more than one mode of play, as well, but that doesn’t seem to be the case this year. If you haven’t played the game before, S2RR takes Super Mario 64‘s concept of using stars to unlock levels and applies them to Sonic 2, except, as one could guess, this time it’s Chaos Emeralds. There’s seven or eight “missions” to each stage in S2RR, and completing one will net you a Chaos Emerald. Collect enough Chaos Emeralds and the gate to the next world opens up. To compensate for this, levels in S2RR are massive affairs, sprawling out in all directions, with plenty of platforming challenges and absurd speed gauntlets to be had. But if there’s one thing I’m missing from last year’s release, it’s the aforementioned “Classic” mode, which disabled the overworld and chaos emerald collecting mechanic and had you go through each zone in S2RR one after another in sequence – though I guess that ultimately defeated the purpose of the hack, especially now, given the size and complexity of some of these levels. Sonic 2 Retro Remix takes familiar Sonic game mechanics and spins them off in unique ways – give it a look.

And that’s our third day of reviews out of the way. “Shadows Fall” and “Sonic NXT” were slated to be reviewed in this batch, but the download link for Shadows Fall doesn’t actually go anywhere, and much like last year, Sonic NXT won’t actually load on my system – I’ll see if Solus wants to step in and take over review duties again for that again this year. Depending on how things go, I might just leave the final review entry to him, if there’s enough non-functional games to warrant such a thing. Until then, see you next time!