A Wild Trip Through Time

It’s said those who don’t learn from history are doomed to repeat it.  So for fans who’ve paid any attention to Sonic the past few years, learning what’s in store for Sonic Generations beyond the trip through nine stages of past and present can understandably rattle the core.  Friends to rescue?  Missions to tackle?  Abilities to equip?  Items to collect?  Whatever happened to straightforward Sonic gameplay?  Shouldn’t this core mechanic be the hallmark of a proper anniversary tribute?

I’m happy to report that based on what I played at New York Comic Con, it is.  Both main modern and classic City Escape stages capture the essence of what makes both sides of Sonic great.  Little about the experience felt awkward, uncomfortable, or jarring.  It is very clear Sega and Sonic Team are putting all their effort toward making this one right, and it shows. 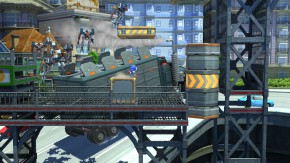 Mixed in with the menacing GUN Truck of Death™, there was plenty of platforming for classic Sonic to tackle in Act 1.  Staying ahead of the truck means easier access to the upper routes.  But if you’re too slow, you may find your path to the signpost hampered, if you’re not run over to begin with.  It’s a nice gimmick that doesn’t interfere with the core classic Sonic values, and balances the sense of speed, platforming, and challenge very well.  I even tried my hand at the skateboard power-up, and while it took a little getting used to amid a lack of total concentration–what with having to endure crowds and all–for most it will be both nostalgic and fun.  Part of me wanted to see if I could ride it all the way to the end (perhaps there’s a secret achievement in that?) but to no avail.

Modern Sonic’s escape from the city eases off on the platforming and is a bit more of a boost fest than I’d like, but it still provides an overall exhilarating, fun experience.  The stage’s opening run is littered with alternate routes for Sonic to skid through.  The lead-up to the big truck chase combines the platforming mechanics of Sonic Colors while still making Sonic Adventure fans feel at home.  And while you can die during the truck chase, it also managed to be both exciting and boring at the same time.  After the initial rush from knowing a giant vehicle with chainsaws is out for blood, the action itself is fairly straightforward and not too taxing until the very end.  That’s not to say it’s bad or even average; given Sonic Team’s purpose for this game, it feels appropriate, and aside from an all snowboard grind run (perhaps as a mission?) there is little room for innovation elsewhere.

Very little of the action on either end felt restricted, save for the very end of Act 1 where I felt Sonic’s top speed was achieved too soon.  But both Sonics play as I remember, and using the XBOX 360 controller, it was a welcome change from the rather convoluted setup I endured with Sonic Colors for Wii at last year’s Comic Con.  (For the record, I reviewed Colors at home using a more traditional controller.) 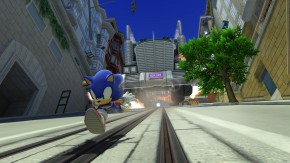 Between the pleasant experience I had speeding through Green Hill this Summer, and the mediocrity I found with the 3DS demos at NYCC, there’s no question the console version is the better of the two Generations games Sega are planning.  The only thing I’m concerned about at this point is whether Sega is trying too hard to throw in as many winks, nods, and references to the blue dude as possible.  Done correctly, it stands to be spectacular, but with such a wide variety of fans that need pleasing, I wonder if it may leave certain, less represented groups yearning for more, or in a worst case scenario, be a distraction or outright take away from the core game.  And while it is very deliberately a nostalgia trip meant to celebrate the hedgehog’s 20 years in gaming, I do hope in the future mixed gameplay like this becomes the standard in more original settings, much like in Sonic Colors.

Be assured, however, that those concerns are minor, and they shouldn’t lessen what’s shaping up to be an outstanding title.  We’re only a couple weeks away from knowing for sure whether Sega can bridge the generational gap, and win back the hearts of not only long scorned veterans, but the general gaming public.  From what I not only played but observed in the later days of New York Comic Con, Sonic Generations for the consoles is doing just that.