I have a controversial statement to make: I never really “got” Sonic CD. Oh, sure, I knew how to play the game, and I certainly didn’t hate it, but it never really seemed to click with me in the same way it did with everyone else. Yeah, Sonic CD probably has the strongest art direction in the Sonic franchise, and regardless of whether you prefer the original Japanese soundtrack or the alternate North American one, the music is absolutely wonderful. But where Sonic CD always stumbled, for me, was in the meat-and-potatoes of gameplay. Level design was an over-complicated mess and the controls were nowhere near as smooth as they were in its more-accessible Sega Genesis brethren. And while the concept of time travel is an amazing gimmick and completely defines the game, it also slows the pace down to a crawl by forcing you to spend upwards of 8 or 9 minutes in a single haystack trying to find the ever elusive needle (the robot teleporter responsible for a “bad future”). While the rest of the world was celebrating Sonic CD as “the best Sonic game ever made”, I was left simply scratching my head. 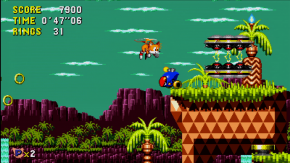 It's a shame Tails isn't unlocked by default.

Enter Christian Whitehead and his “Retro Engine”: Instead of simply port an existing version of Sonic CD, Whitehead has completely rebuilt the entire game from the ground up. This has afforded Sega the opportunity to go back through and smooth over some of Sonic CD‘s rougher edges – the most dramatic to me was an improvement to how Sonic himself handles. Instead of the sometimes-clunky collision detection from the original Sonic CD, the game now finally controls like a proper Sega Genesis Sonic. This in itself goes a long way towards simply improving the overall feel of Sonic CD; you spend less time getting hung up on weird collision detection or waiting for the sluggish Spindash to rev up and more time enjoying the game itself. Of course, for purists out there who like the way Sonic CD originally controlled, there’s an option to return to the original Spindash style. Which, speaking of options, is another thing this new release gets very, very right. Since the early days of Diehard GameFan Magazine‘s audacious decision to dock nearly 30 points from the American version of Sonic CD based on the alternate choice of music (versus their perfect score awarded to the imported Japanese release), the debate has raged on as to which version of Sonic CD‘s soundtrack is better than the other. Long have fans of the game requested an option to choose between the two soundtracks, something this release finally abides by. Fans looking to indulge in nostalgia with the enjoyably cheesy “Sonic Boom” can rejoice – though for those of you out there looking for a perfect rendition of the Japanese opening song, “You Can Do Anything“, know that it has been excised of its lyrics in favor of a strictly instrumental track, with the same applying for the song that plays over the credits, “Cosmic Eternity“. It’s an unfortunate loss, but given how much else this version of Sonic CD does correctly, it’s difficult to be too angry about the change.

The unfortunate part in all of this is that, well, it’s still Sonic CD. While the game is totally playable as any other level-by-level Sonic game, that would be completely ignoring the game’s central mechanic: time travel. By traveling back to a past before Dr. Eggman conquered the planet, Sonic can permanently alter the course of history in order to create a “good future” – a timeline devoid of the evil doctor’s influence. Creating a “good future” in every level is an absolute requirement for clearing the game properly, but doing so can be an exercise in frustration. It’s a lot of wasted time to set up and execute what sounds all too simple on paper: finding a sign post to charge Sonic with time travel energy, finding enough space to get up and maintain a specific level of speed, and then finding and destroying the robot teleporter responsible for polluting the future. That last step in and of itself is quite the task, as Sonic CD‘s levels are perhaps some of the most open, non-linear stages in the entire 16-bit era of this franchise. They’re also some of the meanest; continuing where the high level of difficulty in the original Sonic the Hedgehog left off in 1991, stages in Sonic CD are thicker with enemies and other hazards compared to most other games in the franchise. It would seemingly appear that all of the annoying level design trends experienced in the Sonic Advance and Sonic Rush games were actually secretly adapted from Sonic CD, which has no qualms presenting you with a spring that will launch directly in to a bed of spikes hidden off screen, or outright punishing you for running a little too fast without knowing what’s ahead. An entire, separate review could be devoted to what an aggravating level Wacky Workbench is, as it is packed to the gills with enemies that are difficult to avoid until they’ve already hurt you and gimmicks that are specifically made to send you hurtling in the wrong direction – not even the magic of Whitehead’s “Retro Engine” can save you from its horror. 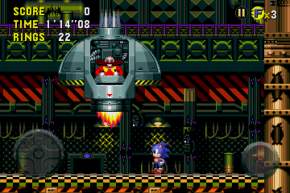 Wacky Workbench might just be the worst level in all Sonic history. (Picture from iOS version)

It would be disingenuous to say that I did not enjoy this version of Sonic CD, however. It simply proves that, despite 16-bit Sonic evangelists claiming otherwise, even the best games in the franchise have always required a bit of memorization to properly enjoy. What really matters is that Sega and Christian Whitehead have gone above and beyond to create a new version of Sonic CD that isn’t just simply “better”, it is without a doubt the definitive version of this game. Even if you already own and enjoy Sonic CD on another platform, you owe it to yourself to pick this version up. Nowhere else are you going to find a version of Sonic CD with both soundtracks, full 16:9 widescreen support, the ability to play as Tails, or improved controls. It’s a shame this generation of gaming hardware has already seen so many re-releases of the other Sega Genesis Sonic games, because I genuinely want Retro Engine versions of those entries as lovingly improved as Sonic CD is right here (and while we’re at it, how about a version of Knuckles Chaotix that’s worth playing, or an actual home port of SegaSonic Arcade?) Given that it’s priced at only $5 (or less, depending on your platform of choice), you should have more than enough reasons to buy this game – and if nothing else, do it to support more Sega games getting this kind of treatment in the future, because regardless of how much or how little you love Sonic CD, there’s no denying that this is an impressive package.