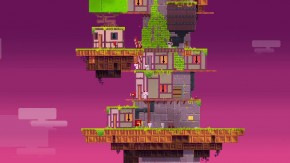 Gomez uses his new power to spy into people's windows.

Announced almost five years ago, Fez has been a long-awaited indie title with a promising concept: a 2D hero in a 3D world. Similar to the ideas of Crush and Echochrome (and announced at roughly the same time), you rotate Gomez’s world to create new routes for him, to bring platforms and items closer to or further from you based on your perspective, even merging separate tracks into the same route. Several years have passed, but only now that we finally have it in our hands do we see that there was another, hidden aspect to the game.

If you try the demo currently available on the Marketplace, you’re given an extremely poor representation of the actual game. You’re locked down to just a few simple rooms, totally focused on the basic gameplay mechanics, doing nothing but hopping on platforms and grabbing cubes. Outside of Gomez’s world spinning, there’s nothing too peculiar about the events of the demo. But if you pay for the game, suddenly you’re in for a drastic change. Gomez starts out in a small town populated by similarly flat-headed folk, reminiscent of the Mimiga Village of Cave Story. When you scale to the top, you’re greeted by Geezer, an adventurer who tells you that your time has come. And on cue, the Hexahedron appears and whisks you away, granting you a new ability and stunning headwear. Unfortunately, exercising your new power is a little too much for the world Gomez lives in, causing the Hexahedron to shatter, and Gomez to restart in his room. Now he’s free to spin the world at his leisure, discovering routes long-since forgotten by the 2D denizens.

For your first time through the game, Fez will primarily be about exploration. It’s not the usual platformer; there are very few hazards that can harm Gomez besides falling to his doom, and there is no lives system to speak of; you always restart at the last piece of solid land you jumped from. In fact, falling death seems designed to limit backtracking, not punish you. You’ll spot a few strange things along the way, you may even miss surprisingly large chunks of areas and still be able to complete the game. And eventually you will have to complete it, because it’s impossible, without cheating, to find everything during your first play-through. 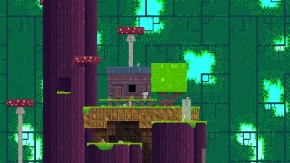 Light and shadow overlays make scenes like this a treat.

After that, it becomes easier to examine your world, and you really pick up on the clues scattered throughout. The platforming becomes almost irrelevant, more of a means to an end, and your focus becomes solving the riddles hidden in the nooks and crannies of this world you previously skimmed over. You’ll be required to decode several different sets of symbols, and the temptation to use an online legend will be great. Speaking from experience, if you do this, you’ll be robbing yourself of a major aspect of the game. The clues to derive them are in the game and actually not that difficult, it’s more about piecing together where to find them and how they correlate.

Yet once you crack these symbols, the puzzles lose a lot of their teeth. There are too many where the end result is “press this button code,” and many of those codes are derived from decoding the same symbol set over and over in different places. The game strangely seems to underutilize the rotation mechanic in puzzles, and other abilities you gain much later on. There are even four major puzzle rewards all tied to a single solution: your console’s clock. It may seem like a cute inclusion, until you realize one of them takes 48 real-time hours to cycle.

Whether the puzzles hold your interest or not may be a question of personal taste, but what about the platforming? Gomez’s handling can be a little loose, and I found myself slipping off of platforms more times than I care to count, but rarely to any major setback. Use of the rotation mechanic hardly grows past its initial presentation, only occasionally spiced up by platforms on timers or pivots. Sometimes rooms develop black holes, little death squares that can make your jumps a little trickier, but even then they’re just a mild annoyance in your way more than a challenge. This game is much more about exploration than testing your jumping skills. 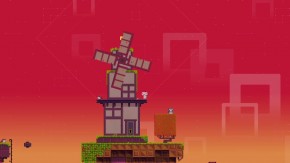 Oh look, an owl! I wonder if it will be my friend.

And it does paint a vibrant world to explore. The environments and the sprited characters dwelling within are all rendered in crisp colors. Little details animate beautifully, as you watch tiny turtles spin around, cats play with butterflies, and so on. Many of the settings are memorable, which is handy because the in-game map and warp systems do very little to effectively label them. Sometimes the world can get a little too vivid as well, leading to a few uncomfortable moments where you’re navigating Gomez across a screen full of bright yellow-green sky, or very distracting visual elements cluttering up most of your viewable area. These are rare events, though.

Unfortunately, these great visuals can often be hampered by the rough framerate. Particularly on older Xboxes, the game can develop stuttering issues during longer play sessions, with clear hitches occurring when loading the next area, or even just rotating the current room. These stutters can cause the audio to chop, and even happen during important jumps, botching your timing. Other glitches are also prevalent, such as accidentally pushing Gomez out of bounds (which can rarely result in an inescapable loop of death), certain rare items respawning infinitely (causing issues with the leaderboard scores currently), crashes to the Xbox Dashboard, and even some reports of the game’s save files becoming corrupt and unusable, or the game refusing to run completely. There is a patch on the way, but as of this review, you cannot ignore that the game has widespread technical issues.

There is more about this game I wish I could discuss with you, but as with any good game with secrets, the meat is in the discovery. Once you piece together a few key elements, however, the puzzle difficulty drops off sharply, and sometimes you’ll luck into solutions purely by accident due to the game’s favoritism of button codes. You’re left with a platformer that rarely challenges your timing, and a puzzle game that doesn’t seem to know the difference between taxing your brain versus just being obscure. It’s still an interesting journey through a visually distinct world, but it doesn’t excel at any particular aspect, or develop the central gameplay as far as it could have. And for a title in development for five years, even if by a very small development group, running into so many glitches and issues at launch is disappointing. This game has a lot of untapped potential, and I would love to see it explored in a sequel, or added DLC. Something that preferably doesn’t take another five years to release.