A journey worth taking

I hesitated as to whether or not this would work as a review. I’ve been meaning to write something about Journey for literally a week now. It was last Sunday – me and my cousin and good friend Matt had decided we would spend his day off from work just “hanging out”. And hang out we did – we ended up playing a little bit of the board game Pandemic, did a little bit of co-op in Splinter Cell: Conviction, but one of the first things he did when I got there was hand me a Playstation 3 controller at the title screen for Journey. At this point, I was recovering from some sleep schedule shenanigans – with the power of Mountain Dew, I tried to go from being a night owl to being a day person over the course of the previous 48 hours, and I’ve been having some insomnia problems as of late so by the time I arrived at his place, between those three days, I had maybe 5 hours of sleep. But hey, it’s worth it, when it comes to hanging out with a good friend (who just happens to be a relative). And it was certainly worth it to play Journey. 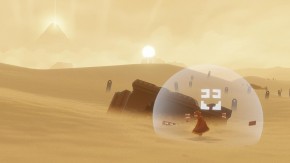 Journey tells you the basics of control, but leaves the where and why up to you.

The bad news is that in the state of mind I was in, Journey‘s soothing, melancholy tone began to sing me a lullaby that at times threatened to put me to sleep. This is not a complaint, of course – Journey is, quite often, a very serene, calming sort of game. Matt’s couch is also so incredibly comfortable that I’ve found myself nearly drifting to sleep even after a full night’s sleep. The good news is that Journey is also full of plenty of moments that snapped me awake and had me sitting upright in my seat. For the 90-120 minutes it lasts, Journey is a wonderful, beautiful game, full of unforgettable sights.

It also deftly defines the concept of “pick up and play”. Journey effortlessly teaches you how its world works, and it does so with no formal tutorials to speak of whatsoever. After being provided a basic explanation of Journey‘s very simple controls, you are turned loose in the desert to figure the rest of it out for yourself. It’s a refreshing change of pace from all of the hundreds of games that bog you down with overbearing tutorial sequences, helper characters constantly blathering in your ear and training rooms – with just little bit of body language, you understand how to play Journey.

And body language is pretty much all you get. Journey tells you a story, but it is a story without dialog or even text – and it works wonders. Each piece of the story ends up almost being a reward for finishing that specific area, painting a gradually more complicated picture of the fates that befell the inhabitants of what are now deserted ruins. I honestly wish more games would realize the power of being able to tell a story without words, because too many once-silent videogame characters have suffered at the fate of being given a voice and it almost always ends up being a poor idea in the end. Journey shows elegant restraint in telling its storyline where most games would rely on overcomplicated excess. To a certain extent, this can lead to a degree of “not getting it”. In my nearly-zombified, half-asleep state, I ended up completely missing the point. In the wrong frame of mind, Journey‘s ending can seem almost trite – that was certainly my first impression. It was not until later, after I had gotten more rest, re-watched the ending, and meditated on it a bit more that, well… I hesitate to say too much, because there’s always the worry that knowing what happens may in some way alter its impact, but let’s just say that it definitely left a genuine impact on me, and was a fitting closure to the story that it so carefully and gently weaved. 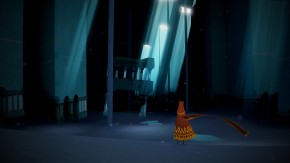 If I had two major complaints with Journey, it’s that the game isn’t longer, first of all. I know we’re all coming to the realization that shorter games can be more intense experiences, but when I was handed a controller I really did not expect I would blow through the entire game before I’d even finished my drink. In retrospect, that’s probably why I was handed the controller, but Journey was such a joy to explore and experience that I just wish there was more – especially for the price. The other complaint is that this game had to be tied to the Playstation 3 as an exclusive. Regardless of my concerns about price or length, Journey is a game that a wider audience deserves to experience. In a way, though, it kind of makes sense – whatever your opinion of how Sony’s handled the brand over the years, they have a distinct way of carrying themselves that still feels uniquely “Playstation” in a good way, and Journey certainly meshes with that tone. It may deserve a wider audience, but it’s also the kind of experience you’ll probably never find on an Xbox 360.

Assuming you’re fine with the length for this price and have a compatible system, you should really play Journey.

Miyamoto to Move Toward Smaller Projects at Nintendo