Before I even begin to cover Sony’s conference, I can’t recommend watching Ubisoft’s conference strongly enough. They seem to be the only ones so far who’ve really knocked it out of the park, and I wish I had more time to write them up, instead of just the big three. Watch_Dogs came out of nowhere, and it left so many jaws on the floor. Far Cry had a much better showing there than at Sony’s conference, and they had a shockingly strong show of support for the Wii U. Just be warned, they weren’t shy about violence, language, or even a little bit of partial nudity.

And now it’s time for Sony’s conference. I had to miss the first five minutes, unfortunately, but to my understanding, nothing of value was lost. First Jack was up on stage, thanking gamers as being the most important part of the industry. David Cage is then brought up to show off the PS3 exclusive, Beyond: Two Souls. Voiced by Ellen Page, Jodie Holmes is a girl with a unique connection to the spiritual world. The game follows 15 years of her growing up, and dealing with the problems it causes, and the people after her, while her ghostly associate Ivan possesses enemies, or shields her from harm. The game looks more action-oriented than Heavy Rain, but the comparisons are strong.

Next Jack’s out there to pimp the “Michael” commercial’s success, using it to transition to the announcement of PlayStation All-Stars Battle Royale on Vita, with Cross-Play and Cross-Saving (synced saves) with the PS3 version. Expect to see a lot of “Cross-” terms by the way, there’s at least four within a 20 minute span. After four color-coded players walk out and spar on Vitas, they tease two new characters, Nathan Drake and a Big Daddy from Bioshock, but show no gameplay of either. Then for another Cross-, LittleBigPlanet 2 on PS3 is announced as getting Cross-Controller DLC, so Vita interaction can be used in a new story mode campaign, with additional collectables.

Jack then lays down some numbers. 80% of PS3s and Vitas are connected online, with a combined list of 1,500 downloadable titles available to them. He touts the Pub Fund for bringing indie games like Journey, Dyad, and PaPa & Yo to the platform, also hyping The Unfinished Swan. He reveals that PS Plus members will start seeing more free titles a month, like this month including LittleBigPlanet 2, Infamous 2, and Far Cry 2, and that PS1 Classics will be arriving on US Vitas this summer. He then bribes the audience with free 1 year PS Plus cards for every person, which gets way too much cheering for a $50 card. Professionals.

Vita also gets a few new software announcements. In addition to Youtube, apps like Hulu Plus, Crackle and Music Unlimited will be hitting the neglected portable soon. Activision’s Call of Duty for Vita promised last year, gets a name: Call of Duty Black Ops: Declassified, but no footage. Assassin’s Creed III Liberation gets a full trailer, however, starring a female assassin in Louisiana. The game is set to be launched in a bundle with a Crystal White Vita and a 4GB memory card, and will employ “Cross-Goods” (hopefully you’re not Cross-Eyed by now) to trade items like skins and weapons between Liberation and the console title. 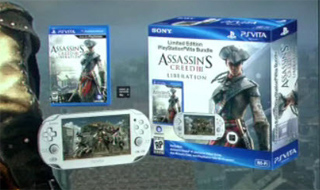 "We've got one picture of her standing around." "That'll do."

Speak of which, the AC III demo for Sony’s conference is set in the Caribbean Sea, with Connor sailing a large ship around with apparent freedom. They’re attacked by English vessels, resulting in a seafaring battle as the weather turns rough, and the waves ragged, lightning flashes turning the screen a stark black and white. Finally the two vessels line up next to each other, Connor jumps from his to attack the other ship, tomahawk raised to strike, but he’s rudely interrupted by the logo. You really shouldn’t ever make a big jump with your weapon raised in one of these trailers, you never get to finish it. And they can’t let them leave the stage without promising PS3-exclusive DLC.

It’s Far Cry 3’s turn on the stage, and they’re happy to announce their secret, that in addition to the single player campaign, they’ve developed a completely separate 4-player co-op campaign. Unfortunately, the segment they played through showed none of the style or unique imagery on display for single player; it was just an anonymous 4-player shooter on an island. The developers played up the “team chatter” way too much, and while the segment ended with a bridge exploding over a nice vista, the explosion itself just launched a few awkward chunks that looked pretty awful. It struck me of a classic example of a waste of resources, but at least the primary team wasn’t the one developing it. Once again, the PS3 version gets exclusive DLC, and the mention of a map creator for a console game sounds nice. 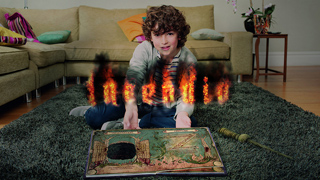 It tells me to burn things.

And then Sony reveals something shocking: they remember that they released the Move controller. I know, the gasp was audible. They rattle off a few upcoming games that will employ it, like Epic Mickey 2 and Dust 514, but use the topic to gateway into their new innovation: books. No, not just books… books with AR markers on them. It was so important to them to hype that it puts a physical book in your hands, which I think actually means it makes publishers happy to sell different “books” that all work the exact same way. With the thoroughly-80’s name “Wonderbook,” Sony showed off a demonstration video of what a book with giant AR markers on it looks like. In addition to Moonbot Studios making one, titled Diggs Nightcrawler (“Diggs” not quite sounding appropriate when spoken by Andrew House), Sony hyped that the first book to be released is based on J.K. Rowling’s Pottermore universe, titled Book of Spells. This is a book of Harry Potter spells, with history, activities and faux-spellcasting with the Move controller, ideal for younger children. You get that, right? Sony apparently thought you wouldn’t, because what followed was an agonizingly-long live demonstration of the fire spell activities, as performed by grown adults. And they still had issues getting the book to respond properly to their interaction now and then. It was shocking that Sony didn’t know when to stop, but it drove the conference into the ground.

Finally, following a positive quote from J.K. shown as a text excerpt only, Sony moved on to PlayStation Suite. Now named PlayStation Mobile, they’re working with HTC to release the first non-Sony “PlayStation Certified” phones. Andrew then said he had one more thing for the audience, but it was just self-congratulating chatter about Sony always thinking about the future, and then he disappeared off stage.

The press conference finally finds something of a strong ending with a God of War Ascension live demo, where Kratos shows off time-rewinding powers, and the ability to rip things off of other things which flail around and bleed a lot. Also he cuts open an Elephant Man’s head and exposes the brain for some reason, after he’s already stabbed it several times. I think he’s just getting bored by this point. He too is interrupted in mid-jump by his title logo, with the announced release date of March 12th, 2013.

Finally, the conference goes dark and quiet. For a ludicrously long time. They start ramping up nature noises, then chatter, and finally The Last of Us snaps onto screen. The duo travel over flooded streets toward a bridge, crossing through a ritzy hotel and across a rooftop to another building, where they run into patrols. Joel is not shy about killing people to clear his path, but at least when they fire back, it clearly staggers him a distance. Running out of ammo, the little girl Ellie blindsides his enemy with a brick, letting Joel get in close for the takedown. They duck into a room to show off the real-time crafting system, making a molotov, and pitching it at an approaching foe. He steals a shotgun from another patrolling fellow, but gets tacked, so Ellie knifes his attacker in the back, distracting him long enough for Joel to knock him to the ground, and blow off his head as the downed fellow cries out, “No, don’t!” There’s clearly an effort to show that the enemies are afraid of dying, and that Joel is cold and merciless about surviving.

The demo is over, and Trenton’s back out. “Never stop playing,” he tells gamers, and the conference draws to an end. Sony can’t afford dogs this year, so the journalists shuffle out more casually.

I hesitate to call it a bad conference, but it had some truly terrible moments. A strong finish, but honestly I found God of War’s demo was a little underwhelming somehow. “Wonderbook” is clearly more about working out all the licensing agreements to make augmented reality books a thing, because they can’t actually be that hyped about printing big AR icons on paper as if that’s new technology, just because they stick it in a book form factor. Vita support was underwhelming for a platform that needs it badly, especially with announcements of games with Cross-Play and Cross-Saving, but no announcement of a Steam Play-like ability to buy a game once and own it on all your Sony devices. Do they expect people to buy two premium-priced copies of the exact same game? There was almost no Japanese presence as well, with Square Enix shockingly absent, unless you count the PS1 Classic release of FF7 for Vita. The Last Guardian again missed another major trade show, and some of the demonstrations were just dull, Far Cry 3’s the blandest of all.

We’ve got one more console maker’s conference on the way tomorrow. Write-ups of the EA and Ubisoft pressers are also coming from another staff member shortly. In the meantime, feel free to offer your thoughts about Sony’s showing in the comments below.

An Interview with Dash