Xbox’s “Summer of Arcade” ends with a winner

If you don’t know who Dean Dodrill is, maybe I can’t blame you. He’s been in and out of the videogame industry for more than a decade, having worked as an animator on Jazz Jackrabbit 2 and having been one of the driving forces behind the never-released Jazz Jackrabbit 3D. As the story goes, Dean Dodrill simply sat down one day and decided he wanted to make a videogame all by himself. Four years later, we have Dust: An Elysian Tail, a game that, in a lot of ways, shames the work of bigger-budget development studios.

Dust: An Elysian Tail follows the path of its titular character, Dust. Stop me if you’ve heard this before: An amnesiac hero wakes up in the middle of nowhere and decides to set off on a quest to find out who he really is. Despite dealing in cliches, like a good genre flick, Dust (the game, not the character) plays with its tropes in some clever (and not-so-clever) ways, particularly towards the end of the game. There were many times I could not shake the feeling that this was some kind of lost Saturday Morning Cartoon from the era of Disney’s Gargoyles, particularly in the banter shared between Dust and his flying companion Fidget, who fulfills her role as the highly-marketable comic relief with textbook precision. I’m not quite sure if that’s a complaint or something legitimately worthy of praise; all I know it stirred emotions within me that were something akin to nostalgia.

Fidget is maybe a little too wacky at times.

It certainly doesn’t help matters that Dust and Fidget banter a lot. At a glance, you wouldn’t expect Dust to be the kind of game to have a lot of talking, but once you get these characters going, expect to buckle in for several minutes while even seemingly unimportant NPCs expound on the legacy of Moonbloods, Elysium Blades and Life Threads. That’s not to say it’s difficult to follow, nor is it as flowery and serious as it sounds; but at some point I started to get fed up watching mostly-static portraits flap their jaws, even if the game goes the extra mile in having all of its dialogue be fully voiced. Thankfully, Dust is smart enough to offer up a button to skip through its dialog line-by-line for those times where you just don’t feel like listening to a hillbilly go on about his “hittin’ stick”.

The annoyance with so much talking is in part because Dust is such a joy to actually play – and that’s because it wastes little time before throwing you into the pandemonium of its combat system. Rather than deal in complex combo strings à la Devil May Cry, or the basic hack-and-slash of Castlevania, Dust opts for something in between – and that’s thanks in part to an ability called the “Dust Storm”, which turns Fidget’s wimpy magic in to a force to be reckoned with. Right off the bat, you feel almost unstoppable as the screen fills with projectiles, wind vortexes and sword strikes, celebrating effortless 100+ hit combos – and that’s just the first hour of the game. It can seem overwhelming to look at, but that’s kind of the point. In general, most enemies are kind of pushovers, but should one actually end up landing a successful attack on your character, you might not even live to regret it. The combat system’s underlying meta game is your ability to comprehend and control the chaos being reflected on screen – because if you don’t, it could be game over. This gives Dust‘s combat a unique feeling that never seemed to get old for me – it was always a treat trying to see just how high I could get any particular combo, and the way the game handles sound design during these combat encounters only encourages you to keep going. 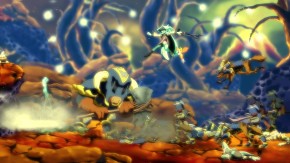 If you can believe it, this is right before this battle gets REALLY crazy looking.

Speaking as the sort of person who has been in a similar “one-man-band” position with regards to creating a game, the fact that Dust: An Elysian Tail remains a coherent “Metroidvania” adventure game is sort of incredible to me, because in my experience, creating and balancing those games is a very difficult procedure. But, like a giant puzzle, each individual piece of Dust fits together exactly the way it should to make up a completed whole. The crafting system in particular deserves special mention for one incredibly intelligent innovation: rather than farming specific enemies for crafting materials, new material types can be sold to vendors where they are then cataloged and available to the player at any time, assuming you have the money to cover expenses. This retains the important feeling of discovering a new material while sidestepping a lot of the tedium usually associated with crafting systems.

This allows you to focus on the real meat of these kinds of games: exploring the environment, and Dust features some of the most beautiful hand-drawn backdrops I have ever seen in a game. Characters don’t always fare as well – while everything animates really well (as expected, given Dodrill’s background in animation), the actual designs and the way they’re rendered during dialogue sequences can be somewhat hit-or-miss. And on the rare occasion the game transitions to a fully-animated cutscene, it tends to look strangely basic and unfinished in comparison to how rich and vibrant everything else is in the game – but these are minor complaints, as on the whole, Dust is a feast for the eyes.

While it’s clear Dust: An Elysian Tail is not a totally flawless game, it feels easy to understand its shortcomings when you come to terms with the fact that the vast majority of this game was made by only one or two people. But that doesn’t have to serve as excuse for its problems, nor should it otherwise be put it on a special pedestal separate from the rest of the industry, because Dust has actually bested games made by massive studios of hundreds of designers, artists, and coders. Most independent games of this type stick to simplistic, faux-retro graphics in order to more easily accomplish their goals; Dean Dodrill has instead given us beautiful high-def 2D animation with a flashy-but-simple combat system and a rewarding world to explore. Don’t miss out.

Note: As blogs are now required to disclose these things by law, we would like to state that TSSZ News was provided a review copy of this game courtesy of Dean Dodrill.

Live Blog: Sega Through the Years