Does The Game Need More Time in the Pits?

I’ll be the first to admit I’ve had reservations about Sonic & All-Stars Racing Transformed ever since Danica Patrick’s association was announced in June.  At that point, the marketing felt more important than the game itself, while screenshots and video that had been released to date appeared too dark and muddy to connect with its primary audience.  Add to that the Wreck-it Ralph tie-in, an alleged third major guest reveal still coming, and the fact we’ve still seen literally nothing of ASR Transformed on portable devices to date that has been buttressed by a delay to December, and the product screams Holiday cash-in.

There may not be anything wrong with that on the surface; Sega needs all the money it can get in light of its financial woes.  Sonic, however, remains on the up and up after a string of quality boxed Sonic games in recent years, including the original Sonic & Sega All-Stars Racing.  That title never felt like it could be a tentpole series, however, so Sega is taking a big risk by thrusting ASR Transformed in that position this Holiday season. 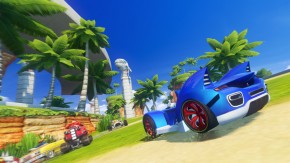 Based on what I played on the floor of this year’s New York Comic Con, this game should adequately fit into that role with a few tweaks.  Aaron Webber tells me both XBOX 360 and Playstation 3 demos there are from later builds.  On the Playstation 3, Seaside Hill felt as faithful a recreation from Sonic Heroes as…well, the first time it was recreated in ASR.  The surrounding environment scenery felt a little sparse in spots, but the game looks vibrant in action, and consistently stays at 30 FPS, even during the boating segments.

I don’t own a Playstation 3 solely because I am intimidated by all the buttons on the controller.  Thankfully, ASR Transformed kept its controls fairly consistent across platforms, allowing me to pick up and play on PS3 rather easily.  Transitions between terrain vehicles are virtually seamless, which will be crucial to keep the action uninterrupted in close matches.  While car handling felt similar to the original ASR, I did wish Sonic’s car responded a bit more to simple turns, much like his boat does on water.  I understand Sumo probably wants me to drift on land rather than simply turn, but even in spots were drifting would be ill-advised, controls didn’t feel quite as responsive. 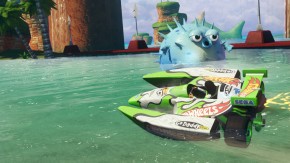 On XBOX 360, Danica Patrick was playable for the first time.  I received a taste of all three gameplay modes with her in the Panzer Dragoon stage.  This was an area looking a bit too dark in screenshots, but in action appeared much better.  The environment felt complete and engaging.  It felt a touch easier to control Danica on XBOX 360 than Sonic on the Playstation 3, at least on land.  When Danica took the air for the third lap, however, I felt a little thrown off.  Perhaps it’s because I never grew accustomed to flight simulators, but I can see where this mode could give players trouble.  There’s nothing particularly wrong with in-game flight in of itself; I just wonder if the added need to navigate obstacles during the race will add frustration for players already trying to learn the ropes.  It certainly threw me for a loop at first.  Later runs on the tail end of the Panzer Dragoon track added bees right near the finish line, which will have an impact in close races, but I feel are more a cheap shot and a detriment than a proper challenge.

What I’m most concerned about with ASR Transformed on XBOX 360, however, is a matter plenty have been concerned about with the game’s Wii U version: frame rate.  The game appeared to struggle with a consistent 30 FPS the entire race.  I wouldn’t say the drops were as inexcusable as we have seen in some Wii U builds; however, racing titles need to keep up with the action.  A game can be won or lost based on what you see and how you see it.  I may have been lucky in that there were not rockets, bombs, or other fireworks going off around me during the intense segments of my races; I shudder to think how low the frame rate could have dropped in those instances.

Of less but still somewhat of a concern on both versions is the openness on some of the course areas.  I know I got lost and dropped a couple notches a couple times trying to figure out the correct route in the air and water.  There are some arrows guiding players at most points, but not all spots where it could prove useful.

Of all my gripes, the only one I could see as a deal breaker could be the frame rate.  While I suspect we’re past the point of even moderate changes, I have better confidence Sumo has tightened and tweaked the game for proper release.  Does that mean Sonic & All-Stars Racing Transformed will be the blockbuster Sega needs come next month?  On Playstation 3, probably not.  For comparison, I spent some time with LittleBigPlanet Karting at Sony’s expansive NYCC display.  LBPK had much more responsive controls, and its incredible customization options plus an earlier release will likely put it over the top.  It’s a shame, too, as it’s obvious Sumo put most of its development effort into the PS3 edition thus far.

That doesn’t mean ASR Transformed is bad–it won’t have any competition on XBOX 360, after all–but your expectations should be about as much as they were with the original; no better, but no worse.

Sonic games 50% off at Steam