Jump Up, Jump Up, and Get Down

Please note that this review was conducted on an iPhone 5. Performace and graphical quality may vary on other iOS devices.

When you think of the typical iOS game, casual pick-up-and-play experiences usually come to mind. Games like Angry Birds and Cut the Rope provide simple yet addictive gameplay that nearly anyone can enjoy time and time again. The Sonic franchise’s presence on iOS has largely been limited to ports of classic and modern titles, but that’s all about to change thanks to a quietly-released mobile game called Sonic Jump. The newest production from Sega’s Hardlight studio, Sonic Jump is both a remake of an older mobile game with the same name and a terrible idea on paper; place Sonic the Hedgehog in an vertically-scrolling game that largely does away with the franchise’s trademark speed. Despite the curious concept, the final product is simple, addictive, and more enjoyable than I expected.

Sonic Jump is a vertically-scrolling platformer that shares a lot of its design with other popular titles on the App Store. Sonic is always jumping, and the player tilts their iOS device left and right to guide him from platform to platform. The playing field is littered with springs and familiar robotic enemies; the former launches Sonic high in the air, and the latter can be defeated by jumping into them from underneath. Tapping the screen will cause Sonic to perform a double jump, giving you more height and more control over where you’ll land. At first glance, the game seems to be an almost-wholesale ripoff of Doodle Jump, but as history would have it, the original Sonic Jump was released way back in 2006, so Sonic beat Doodle Jump to the market by about three years. 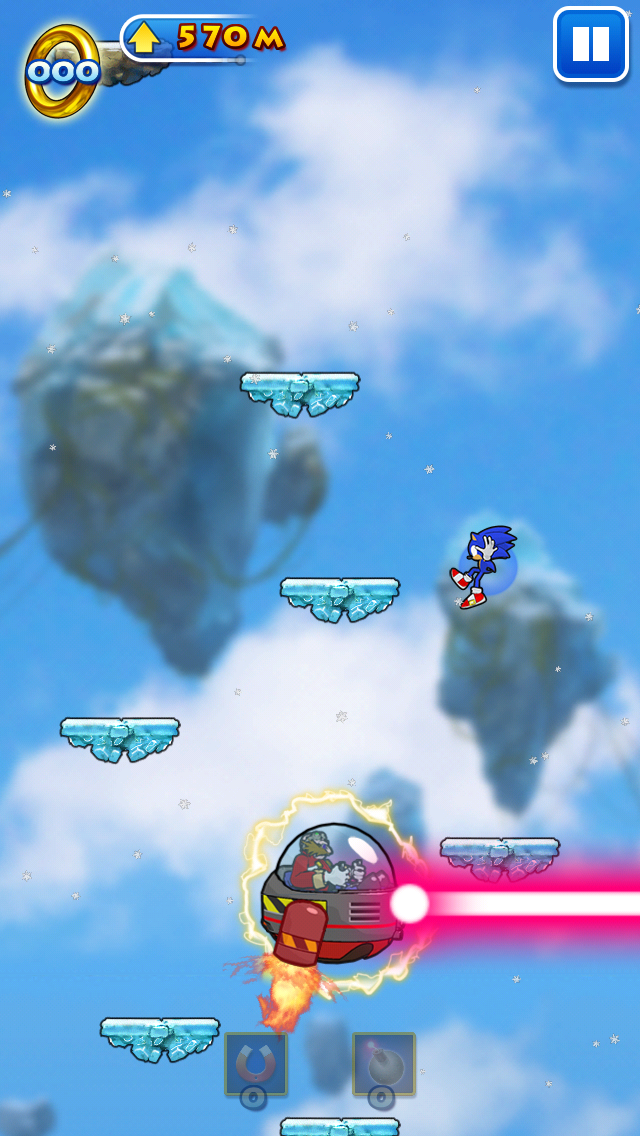 With that being said, the remade Sonic Jump smartly expands on its core gameplay to offer a deeper, more compelling experience. The game is broken down into two basic modes: Story and Arcade. Story mode introduces the game’s very loose plot through gorgeous comic book cinematics that you can skip at any time. The game itself consists of three zones, which are broken down into eleven regular acts and a boss fight. These regular acts have predetermined level designs; this gives the mode a much more structured feel that I eagerly welcomed. If you’re looking for a more casual way to play, Arcade mode allows you to jump through a random, endlessly scrolling level set in any of the three zones. This mode even features shortened boss fights throughout your climb so things stay fresh. Each of the zones also follow their respective difficulty curves from Story mode, so casual players that just want to kill time can tackle Green Hill Zone while players looking for more of a challenge can take Mountain or Jungle Zone for a spin.

Both of these modes end up being enjoyable thanks to Sonic Jump’s solid control and engaging design. The accelerometer does not move Sonic as much as other games of this genre, so it becomes easier to move delicately and hit small targets. Though this is usually helpful, it admittedly can become problematic when platforms are spread far apart or you need to get away from a boss’s attack. It also doesn’t help to liven up Green Hill Zone, which rests on its laurels and churns out levels that are so easy, they border on boring. This is unfortunate, as some players will grow disinterested and fail to experience the interesting and more challenging levels that Mountain and Jungle Zone offer. These later zones offer interesting level gimmicks like falling hazards, disappearing platforms, and wind turbines that push the player to do more than mindlessly tilt and tap their iPhone.

Even with this engaging gameplay, all three zones fail to provide a truly memorable environment to jump through. Jungles and icy mountains are fine, but there’s nothing like Rooftop Run or Starlight Carnival in sight. It’s a nitpick, I know, especially when you consider that these same three zones were lifted straight from the original Sonic Jump, but it feels like a missed opportunity nonetheless. The forgettable nature of the environments doesn’t stop them from looking gorgeous, however, especially on a Retina display. The character sprites and environment art are bright and cartoonish, with the menus using a similarly slick style. The overall art design is very polished, and it helps the game feel unique. The accompanying sound effects are suitably Sonic, with jumping, ring collecting, and enemy wrecking all sounding as they should. The music consists of remastered tracks from the original Sonic Jump, which results in an energetic but largely forgettable audio experience. 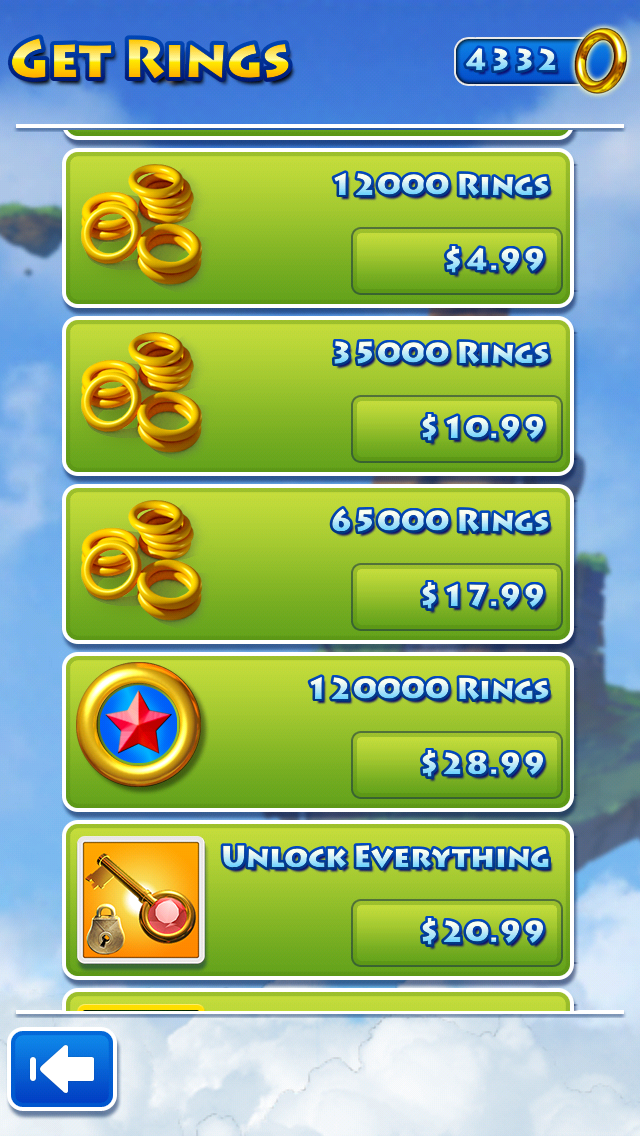 Sonic Jump’s microtransactions don’t seem to add up to much.

There’s more to talk about, however, as Hardlight has added several power-ups, unlockables, and a big rewards system to keep gamers interested. As you play the game and collect rings, you can spend them in an in-game store on a multitude of power-ups like shields, bombs, fall protection, and ring-attracting magnets. Players can also purchase rings through microtransactions in the store, but these offerings are oddly priced and seem like nothing more than a tacked-on money grab. The store even gives you the option of playing as Tails or Knuckles, but they (along with many of the power-ups) need to be unlocked, and you can do so through a separate leveling system. The game will present the player with three in-game challenges at a time; as one is completed, another is added and the player is rewarded and occasionally leveled up.

For the most part, both the store and the leveling system succeed in boosting the game’s replay value. The in-game challenges are creative, varied, and just involved enough to keep players engaged. My only real complaint is that much of the unlockable content in the store comes with too high a barrier for entry; most players will not reach level 20, for example, and therefore will never play as Knuckles; even hardcore completionists may lose interest before they see everything. At any rate, if you’re willing to stick it out, there are quite a few unlockables waiting to freshen up gameplay.

To be honest, I did not have high expectations for Sonic Jump. Its lack of promotion suggested a lack of confidence on Sega’s part and, at first glance, it seemed like just another vertical platformer. However, its sharp controls, slick presentation, and complex reward system help it stand tall against many of its competitors and make it an honestly fun game. It’s not for everyone, but if you enjoy the vertical platforming that Doodle Jump and others offer, you should definitely give this a try.

Despite weak beginning levels and curious microtransactions, Sonic Jump delivers a fun and fairly addictive experience thanks to tight controls and an elaborate rewards system.

Sonic Mania is heading to Playstation Plus in June