The cat ” plays go fish” in the Seaside Hill circuit

Big the Cat is one of the well known racers of the Sonic & Sega All-Stars Racing roster that is known to be absent on the sequel, Sonic & All-Stars Racing Transformed. But no more! He will be in the game…as a cameo.

In a recent video recorded by website Third Rate Minion at the past New York Comic Con, we can see someone play on a few laps of the Ocean View track, the one based on Seaside Hill. At the same time, Aaron Webber tells the player some info about the game, and reveals that Big the cat is indeed making a cameo on that track.

We have a capture of the exact moment you can see Big, fishing at Seaside Hill.

Sumo Digital had said before that they’ve tried to shoehorn at many cameos and references they can, and this is one of them.

In another of the videos uploaded by Third Rate Minion, we can see Danica Patrick running trough Dragon Canyon track.

You can see both videos, and a capture of the exact moment Big shows up, down below. 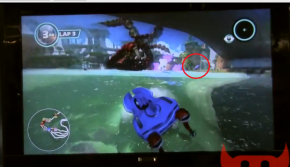 Sonic Chronicles On the Spot At GameSpot