I get a lot of funny looks around these parts when I post non-Sonic and especially non-Sega content, but the truth of the matter is that I really love Halloween – and I was hired as a reviews editor, and this is technically classified as a video review, so I don’t think I’m being too out of line in posting it. Wouldn’t be the first time I’ve written about a horror game under the TSSZ banner, anyway. So if you spent all your money on costumes and candy this year, I’ve collected a selection of five spine-chillingly cheap PC games to play this October 31st. Some are mods for games you may already own; others are stand-alone releases that are entirely free to play. So turn off the lights, put on a comfortable pair of headphones, and get ready to have your pants scared off. 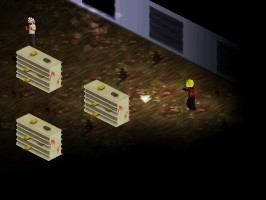 At least you don’t have to scavenge for batteries.

Most people know the work of Ska Studios for their Xbox Live Arcade releases Dead Samurai, Vampire Smile, and the forthcoming Charlie Murder. In actuality, these guys have been making games for years – and one of my favorites will always be Survival Crisis Z. The closest relative to SCZ would be a loot-based RPG, but don’t come in expecting the next Diablo or Torchlight – this game is about managing fatigue, betraying factions, dealing with infected party members, and scavenging underground laboratories. What it lacks in visual fidelity it more than makes up for in massive replay value, with randomly generated cities, tons of secrets and a wealth of unlockable modes. It’s a genuine shame they never developed a sequel to this game. If you ask me, the future of games is in non-linear experiences like Minecraft and Day-Z, where you are placed in to a huge world and the only objectives are the ones you make for yourself. In that regard, Survival Crisis Z feels a little ahead of its time. If you can look past some simplistic character art and figure out how to set up your controls properly, Survival Crisis Z will provide you with near-endless hours of enjoyment – just be aware that it can have trouble running on newer versions of Windows. 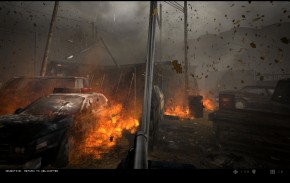 That’s a lot of particle effects.

I don’t think there was ever a time when anybody thought of Unreal Tournament 2004 as being visually impressive. That’s not to say it was an ugly game, but by the time of its release we were already knee-deep in shader-intensive games like Half-Life 2 and Doom 3, making UT2004’s flat textures look, well… “flat”. But that hasn’t stopped Long Nguyen’s “Out of Hell” from utilizing the engine’s strengths to build something that looks amazing. Seven years were spent creating (and re-creating) Out of Hell, and it shows: every inch of every map is overflowing with detail. The end result is a dense, claustrophobic atmosphere full of broken glass, burning cars, and dead leaves. It’s actually sort of mind blowing to think that this is all the work of a single person – but that actually ends up working against the game in a couple of places. The intense clutter can mean it’s not always clear where you’re supposed to go next, and some of the animation looks stiff and awkward. The most unfortunate result of the game’s one-man-army development cycle is the fact that it contains a lot of dialogue but no voice acting whatsoever. But it’s that undeniable atmosphere that makes Out of Hell what it is – there is simply nothing else that I’ve seen with environments that look quite like this, and that goes a long way to make up for any other shortcomings the rest of the game has. 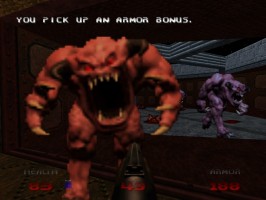 Doom might hold the record for the most ported game ever. Since its 1993 release, Doom and Doom 2 have seemingly been ported to every platform you can thing of, and chances are you own at least three devices that can theoretically could be playing Doom right now. But what you might not be able to play is Doom 64, a game released exclusively for the Nintendo 64 by Midway back in 1998. This isn’t another port of an existing Doom, but a brand new game. Despite some other game, this is more like the real Doom 3, with the same classic gameplay you remember, but with an added layer of creepy atmosphere. It’s not quite Dead Space, but skulking around the game’s dimly-lit martian laboratories can be pretty spooky. Doom 64 has never resurfaced on any other platform since then – not even Nintendo’s own Virtual Console. But don’t start browsing Ebay just yet, as there are ways to play Doom 64 on your PC with a mouse and keyboard. You have your choice between Doom 64 Absolution and Doom 64 EX, and both have appreciable strengths and weaknesses. What this boils down to is that Doom 64 Absolution is a slightly imperfect re-creation of Doom 64 that only requires you to own a copy of Doom 2 in order to play it, whereas the EX release is a 1:1 accurate port of Doom 64 that requires the original Nintendo 64 cartridge ROM. I’ll let you decide which you’re more comfortable with, but it’s definitely worth playing. 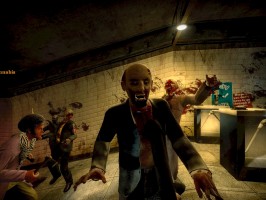 When there’s a lot of them, slow zombies are pretty dangerous.

Is Left4Dead not realistic enough? Are you tired of dealing with raiders in Day-Z? Have you ever wanted to kill zombies as Walter Sobchak from The Big Lebowski? If you answered yes to any of those three questions, then No More Room in Hell might be the game for you. Originally announced in 2004 as what might have been Half-Life 2’s first multiplayer mod ever, No More Room in Hell had a rocky development cycle that saw the project being all but abandoned after the release of the first Left4Dead. After changing project leads, it resurfaced as a game that encourages tight team coordination, because a single bite or scratch is all it takes to become infected. This is most definitely a game best played with a group of friends, because without adequate communication and teamwork, you’re probably going to die within seconds of stepping out of the safe zone. No More Room in Hell is a difficult, unforgiving mistress that requires patience and strategy to even have a chance at finishing one of its objectives. And for those of you out there who just want to mow down zombies, there’s a wave-based survival mode, too. 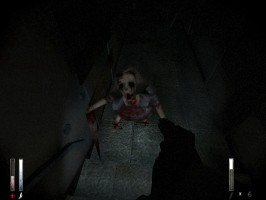 It is rare that I find a game legitimately frightening. Creepy? Sure. But having played a number of games that are supposedly “the scariest game ever”, I have often come away bored, frustrated, or more often than not, just disappointed. Team Psykskallar must be doing something very right, then, because Cry of Fear is so legitimately terrifying that I find I cannot play the game for long stretches. Which is a shame, because Cry of Fear might be their best game ever – it’s up there with professional releases like Amnesia, and really pushes the old Half-Life engine beyond its boundaries to enable advanced graphics shaders, a unique inventory system and complex interactive puzzles. It’s backed by a disturbing storyline that really makes you question the nature of hallucinations and whether or not our character is currently trapped within one. If you want to play something that will give you nightmares, Cry of Fear might just do the trick. 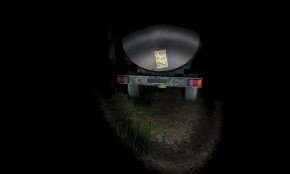 The only thing to fear is fear itself.

It just wouldn’t be a feature on spooky games without mentioning this elephant in the room. I personally never really got in to the whole Slenderman phenomenon – for every creepy moment in web series like “Marble Hornets” and “Everyman Hybird”, there were ten that had me rolling my eyes. But when you really get down to it, a tall, faceless man is not the scary part about Slender. What the game represents is the purest form of fear: knowing that something is out to get you and there is nothing you can do about it. For many, there is nothing more frightening than knowing they are about to die – and the longer you play Slender, the closer to death you become. Ultimately, Slenderman himself does not really matter – it’s about an environment that feeds paranoia. Stranded alone in the dark old woods, your eyes and mind begin to play tricks on you – every snapped twig and errant branch caught in the beam of your flashlight could be a potential killer coming to end your life. As is often the case in even our most basic fears, one’s own imagination is often your worst enemy. That is the key to Slender’s explosive success, in spite of what is quickly becoming a tired internet meme. If you’re open to being scared and haven’t seen Slender yet, you owe it to yourself to download it right now.

Obviously, there’s a lot more out there than just what we’ve listed here today, but I hope you’ve found something to sate your appetite on the cheap this October 31st. Happy halloween!

Poll: Most want ASRT PC DLC on Consoles, But Many Want it for Free