Are Sonic’s fists as fast as his feet?

Let’s get one thing straight right now: I’m not the kind of guy who is extremely knowledgeable about fighting games. I’ve played my fair share – all of the Virtua Fighters, every Street Fighter, and so on – but I wouldn’t say I’m terribly good at them. I know just enough to be a danger to myself. I understand what chip damage is, and if you hum a few bars, I can probably do a cross up – or at least know when one’s been done to me. And in my long and storied history of only vaguely understanding fighting games, there are three that I have felt almost competent at: the original Marvel vs. Capcom, the Playstation version of Tekken 3, and Sonic the Fighters. 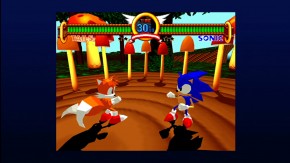 Not as controversial as Mortal Kombat, but it still made some Sega reps uncomfortable.

I understand enough about Sonic the Fighters to know that it really shouldn’t be called that. As the story goes, Sonic the Fighters was born after the team working on Fighting Vipers secretly added Sonic and Tails to the game as a joke, and it eventually blossomed in to a game of its own. Not everybody was apparently happy with its existence – namely Sega of America, who, despite localizing the title in North America as Sonic Championship, was uncomfortable with the level of violence on display. It’s one thing when Sonic is bopping robots on the head to save cute little animals, but when he’s beating his friends senseless in a fist fight, some eyebrows in the marketing department are going to get furrowed – especially given the proximity to the whole Mortal Kombat videogame violence debacle a few years earlier. As such, Sonic Championship cabinets apparently became rare enough that the world at large simply refers to the game by its Japanese name, Sonic the Fighters. As a child, I was lucky enough to have a Wal-mart with a Championship cabinet, stationed right next to Star Wars Pinball.

Whenever I managed to wrestle some money out of my Mom to play it, I always found the game to be pretty easy going, something that still remains to this day. While there’s a pretty extensive move list for each character, there’s not much in the way of fireballs or spinning bird kicks. If you’re playing by yourself, most of the game can be cleared without much effort using only basic combos. Despite being based on the Fighting Vipers engine, little of that game’s freneticism translates over. 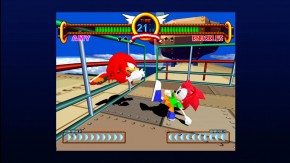 Sonic the Fighters can be a little button mashy, but I think I kind of like that.

Instead, characters seem to shuffle across their 3D arenas rather slowly, even after double tapping the joystick and make them break in to a sprint. It’s something I never really had a problem with, but in retrospect, seems kind of strange for a game in the Sonic franchise. But the most controversial is the way the game handles its block system: in most fighting games, you can block almost indefinitely, and while blocking, you take a reduced amount of damage from your opponents. In Sonic the Fighters, you get a shield for blocking incoming attacks. While they really do block just about anything, the catch is that should a shield sustain a heavy amount of damage, it will shatter, depleting one of your stock. If you run out of shields, your character is left defenseless – save for a tricky sidestep dodge. That alone has been enough to scare away most “serious” fighting game players.

I had fun enough with the game just by myself – primarily because I have never, ever found anybody else who has wanted to play Sonic the Fighters with me. That’s not an issue with this HD re-release, which comes with online multiplayer support. It’s not quite as robust as other fighting games, but it gets the job done without lag being too much of an issue, and features both ranked and customizable unranked modes. There’s always the question of whether or not a community will really stick with a game like this, and while there’s a handful of people duking it out right now, there’s never any way of telling how many are going to stick around much past a couple weeks. 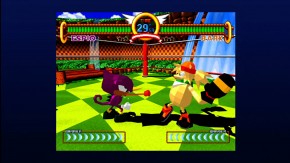 “Whoa, dude, are you trying to lick me? Gross!”

Graphically, out of all the Model 2 games being ported to HD consoles, Sonic the Fighters might’ve made the smoothest transition. For purists, the option exists to render the game at its original 640×480 size, but for those of you who enjoy your big screen TVs, there are also options to increase the resolution to accommodate HD displays – though the game unfortunately never breaks out of its 4:3 aspect ratio. Sonic the Fighters‘ cartoony characters and solid colors are amazingly crisp when rendered in high definition, giving the game a clean, stylized look that is both impressive and endearing even today. But perhaps the most interesting feature of this HD re-release is the ability to select Dr. Robotnik, Metal Sonic, and Honey the Cat as fighters. In the case of Dr. Robotnik and Metal Sonic, they are boss characters that are not normally available for play – not in the original Arcade release, and not in the Sonic Gems Collection version of the game. Here, they’re only available in Offline Versus or in unranked multiplayer, but it’s nice to have them regardless. More important is Honey the Cat – once dug out of the original coin-op version by skilled hackers more than a decade after release, Honey was originally intended to be a playable character in Sonic the Fighters but was never fully completed before the game shipped to arcades – but here she is, along side Dr. Robotnik and Metal Sonic, exclusively for this HD version. Completing the circle that started with Sonic and Tails making super-secret guest appearances in Fighting Vipers, Honey the Cat is based off a character in Vipers of the same name.

Sonic the Fighters seems to have gained something of a reputation among the hardcore crowd for being a bad game. When I think of bad fighting games, I remember Rise of the Robots, Pit Fighter, or Shaq-fu. These are games with fundamental problems in animation, control, and mechanics. Sonic the Fighters was made by Yu Suzuki’s AM2 when they were at the top of their game – hot off successes like Fighting Vipers and Virtua Fighter 2, the latter of which being the single biggest, most popular fighting game of its era. This was not some fly-by-night cash in; at worst, you could call it an experiment by a seasoned developer. Does it deserve to be at a tournament like EVO, rubbing elbows with the likes of Street Fighter IV, Marvel vs. Capcom 3, and Persona 4 Arena? Probably not, no. But not all fighting games need to be built to be played at EVO. Maybe I’m not the right person to be judging the quality of something like this, but maybe that doesn’t matter; I have fond memories of Sonic the Fighters, and this version does them all justice. It may not be the most sophisticated or technical fighting game in the world, but I still think it’s fun. That’s what really matters.

Sonic Fans Want You to Vote