Sega’s push into the mobile space continues. After the successful release of Sonic Jump for iOS devices, it makes sense for the stewards of the blue blur to continue to reinforce his presence on the platform. Their next attempt to do so once again comes from development studio Hardlight, and it takes the form of an infinite runner called Sonic Dash. While not quite as varied or addictive as its predecessor, Sonic Dash still manages to deliver enough frantic action to justify its price point.

Like Sonic Jump, Sonic Dash borrows its core gameplay concepts from other popular mobile titles. Last time, it was Doodle Jump; this time, it’s Temple Run. Here, Sonic runs forward on an infinite track, and it’s up to the player to maneuver him over, under, and around the level’s assorted hazards. Like many iOS games, control comes via broad, touch-based gestures, and these mechanics actually work quite well. Swiping left and right shifts Sonic to the left, middle, or right track, much like quick stepping in Sonic Unleashed and similar games. Swiping up makes him jump, and swiping down makes him Spin Dash. 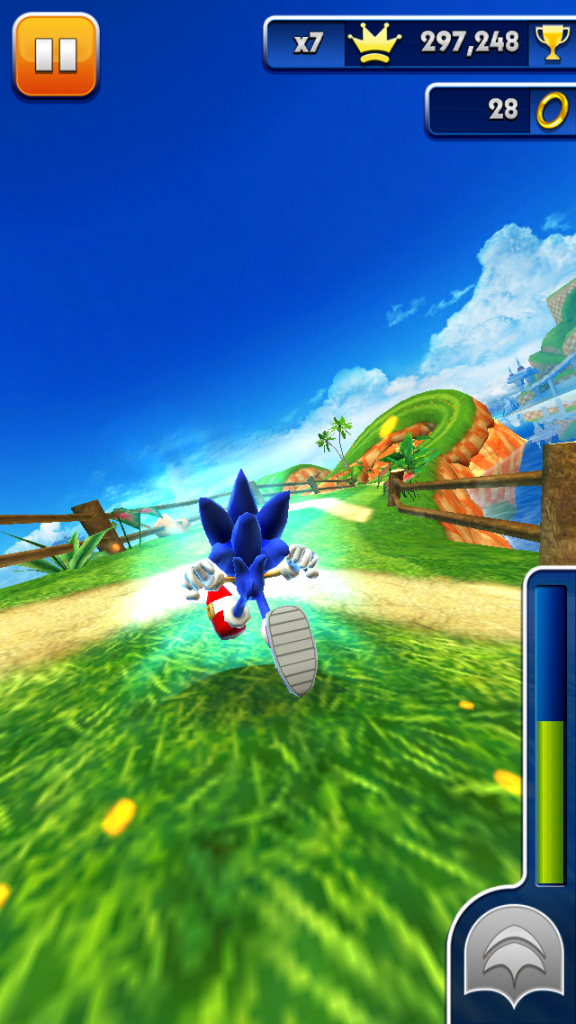 Boost Mode invites you to put your iOS device down and watch Sonic go.

As usual, there are rings strewn around the level. Players can collect them, bank them, and spend them on upgrades for Sonic’s basic abilities. Rings also directly impact gameplay; much like recent games in the series, collecting rings allows players to fill up an in-game meter and trigger Boost Mode, although it works a bit differently this time around. In past games, boosting made Sonic nearly invincible, but he could still fall victim to certain environmental hazards like bottomless pits. In Sonic Dash, Boost Mode is essentially god mode; Sonic bursts through every obstacle in his path and floats over every pit he encounters. You can still swipe left and right to control him, but there’s little need to do so since he can blow past anything and everything in his way with no help from you.

Aside from the autopilot nature of Boost Mode, this style of gameplay works and fits the general mold of the franchise well. Although solid controls are always important, smart level design to complement them is just as critical, and Sonic Dash stumbles a bit in this department. At first, encountering new obstacles and frantically dodging them is entertaining and challenging. However, the game empties its bag of tricks rather quickly, so it’s easy to become familiar with everything it will throw your way. This means that skilled players will learn the ins and outs of everything the game has to offer fairly rapidly, and that can lead to some long and potentially monotonous runs. 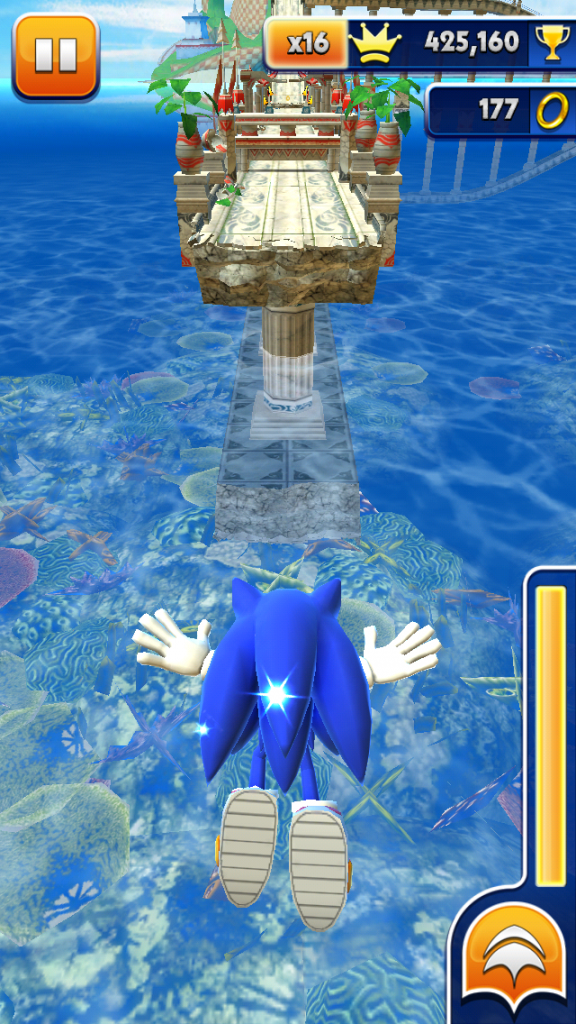 Once you learn the ins and outs of the game, it’s pretty easy to get really high scores.

Unfair challenges also arise due to the occasional bug or design flaw. The game eagerly employs dynamic camera angles that may fail to give you enough warning about upcoming obstacles. Some obstacles can also be awkwardly placed; for example, a small rock or totem pole right behind a large wall is nearly impossible to see before it’s too late. Additionally, I encountered a very small number of glitches that threw the camera in front of Sonic until he ran into an obstacle I couldn’t see; one of these occurred when I was very far along in a run, and it didn’t please me one bit. Admittedly, these issues are few and far between, but a glitch or a barely-visible obstacle that prematurely end your run can cause their fair share of frustration.

Outside of gameplay, Sonic Dash has tweaked the rewards system we first saw in Sonic Jump. Players are once again presented with various challenges to complete. This time, however, completing these challenges rewards players with red rings that can be spent on collectibles like revives and additional characters. Unfortunately, these challenges are often demanding and difficult to complete, so red rings are usually in short supply. In another frustrating twist, many of the more interesting rewards, such as the additional characters, require a large amount of red rings to unlock. In an attempt to compensate for this, those pesky microtransactions have returned, and for all but the most dedicated of players, they may well be the only practical way to play as Tails or Knuckles. 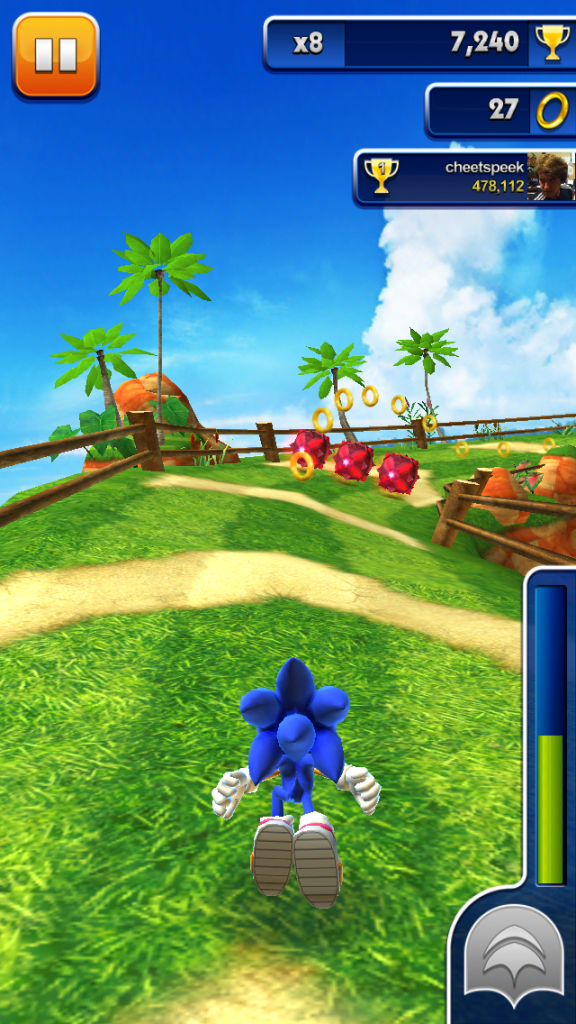 Seaside Hill is lovingly rendered with detail and color to spare.

Like so many other Sonic games, Sonic Dash‘s visuals and sound design are nothing short of impressive. The game’s singular environment, Seaside Hill, is rendered with detailed textures and vibrant color. Additional environments would have been nice, but at least the one we have looks excellent. Additionally, Sonic and the level’s various enemies look sharp and possess fluid animation, thus ensuring that no part of Sonic Dash is difficult to look at. The game’s sound should also meet players’ expectations with an upbeat techno remix of Seaside Hill’s theme joining all of the Sonic franchise’s instantly recognizable sound effects.

I realize much of this review may have sounded pessimistic, so let me be clear: Sonic Dash is good. It’s fast, it’s fluid, and it’s addictive in short bursts. Its main problem, however, is that it lacks the depth and content to keep that addictiveness alive over longer periods of time. Sonic Jump has been supported with post-launch content updates over the past few months, and if Sonic Dash can follow the same pattern with additional environments and obstacles, it has a bright future ahead of it. Until then, I consider Sonic Dash to be a good mobile game that’s a little too shallow to be a great mobile game.

Solid gameplay and lush visuals make Sonic Dash a good mobile game, but a lack of depth and a frustrating rewards system hold it back.