The community has been recently shocked with the news of the Nintendo and Sega partnership revealed at the latest Nintendo Direct, last Friday, along with the reveal of two of the three Sonic games that Nintendo consoles will receive: Mario & Sonic at the Sochi Winter Olympics 2014 and Sonic Lost Worlds. Well, today we have some more info about the third mysterious one.

According to what a source close to Nintendo revealed to Sonic Paradise, the third exclusive game will be a racing game. This fits with the recent rumours coming from a month old  twitter conversation between Steve Lycett of Sumo Digital and some of our reporters: Ryan Bloom and myself, Andrea Gil, in where Steve Lycett teases about the possibility of seeing a racing game who mixes  Sonic and other companies characters, clearly Nintendo ones after the exclusivity deal made public a few days ago. But, as our sources says, this one might not be the same Steve Lycett was teasing. 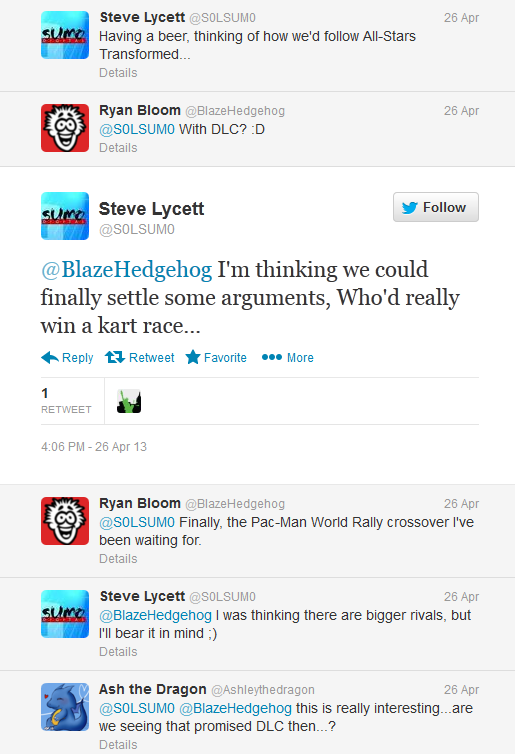 This game is not a Sonic & All Stars Racing new instalment, neither it is a Mario Kart Vs Sonic All Stars Racing game. If fact, our source says it’s not even sure its a kart racer, but its a racing game from the Sonic series for sure. It’s being made with the idea of taking Mario Kart’s U place until it gets released, next 2014, as this new Sonic racer would be released later this year in it’s place, around Christmas time.  According to the source, this racing game will feature Nintendo characters along with Sonic ones.

According to all those information, our bet goes to a new Sonic Riders instalment, since it’s not a kart racer, although it’s a racing game, coming from the Sonic series and Sonic only, and it has seen guest characters from other series before, like Nights or Billy Hatcher. We will have to wait until a later date for the official reveal, proving this source is legit.

But our info is not only about this third game. We also have some information about Sonic Lost Words. According to our source, this is a main series game, and similar to Sonic Colors  ” As it updates the saga with new abilities, worlds, and characters“, according to the source words, as we can expect to see some sort of gimmick similar to the Wisps on Sonic Colors.  The source also claims this game is ” Something huge“.

All those games are being developed by SEGA, although they have Nintendo’s support and collaboration. Nintendo and SEGA are also in talks for more collaborations outside of the Sonic series, so we should expect more interesting exclusive Sega/Nintendo games in the future.

Last, but not least, the source also talked about the presence of SEGA characters at the next Super Smash Bros. game. According to it, Sonic will make a comeback, and Bayonetta will join the cast as one of the newcomers of this game. More info was revealed about Super Smash Bros, that we will reveal at a later report exclusively about Nintendo.

We are confident about this source legitimacy, but as it not official and it can still change some bits as time goes, we will label this as a RUMOR. We will come out of doubts soon, as there will be more info about Sonic Lost Worlds very soon, and maybe also the third game could be shown soon.