The original Sonic the Hedgehog is perhaps the most iconic and ubiquitous game in the franchise; it revolutionized the platforming genre back in 1991, and it spread well beyond the confines of the Genesis in the decades that followed. In fact, you’d be hard-pressed to find a gaming platform in recent memory that doesn’t have a port of the game. For the most part, these prolific re-releases have been nothing more than direct ports of the original game with one or two minor updates and features tacked on. The most recent port, crafted by Christian ‘Taxman’ Whitehead and Simon ‘Stealth’ Thomley based on the Retro Engine, seeks to change all that by reshaping the Genesis experience for mobile devices from the ground up. Does this new port have what it takes to rise above the rest? Let’s find out. 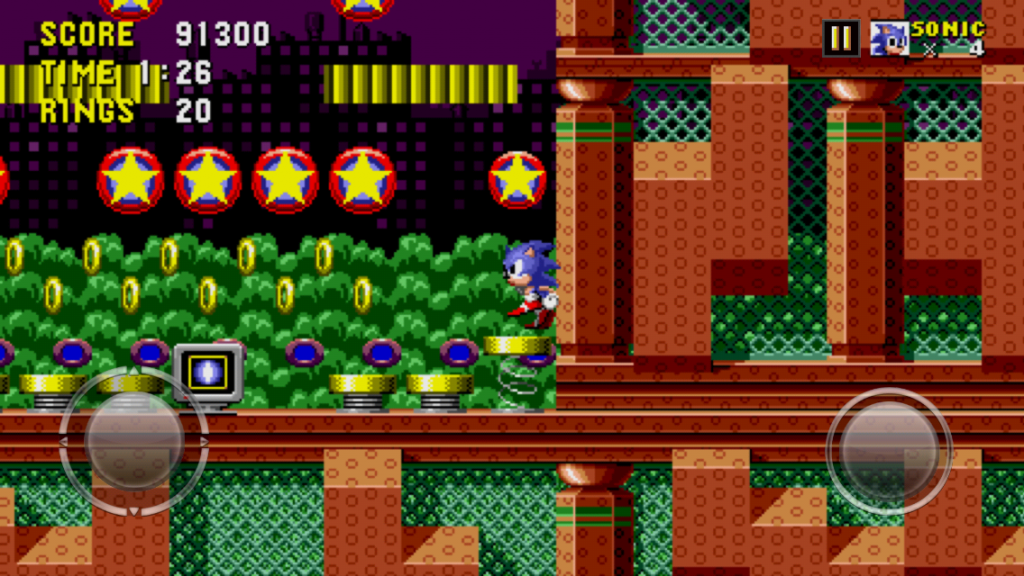 A fast-paced game like this definitely benefits from the widescreen aspect ratio.

Right off the bat, players should notice a dramatic improvement in the game’s presentation. This port runs in full native widescreen thanks to the Retro Engine, and it looks stunning on phones and tablets alike. Like the 2011 edition of Sonic CD, the game itself is wrapped in a brand-new menu system that not only looks appealing, but also runs circles around the clunky presentation of the original iOS port. The game’s feature set has been beefed up as well; both versions now feature a Time Attack mode, and the new iOS version includes support for Game Center achievements and leaderboards. The game’s soundtrack has also been remastered; the drums have more punch, and the overall sound feels richer than ever before. Although none of these features are essential to the experience, they go a long way toward helping the product feel like a complete, cohesive product.

The improvements extend to the touch controls and overall game performance as well. Quality touch controls are often difficult to get right, and poor implementation can make platforming games a real chore on mobile devices. Blissfully, this new port replaces the occasionally-uncooperative D-pad from the original iOS port with a more agreeable one that is far more flexible and user-friendly. It’s still not perfect, and it’s still not an ideal replacement, In terms of device performance, a standard playthrough on both iOS and Android yielded a rock solid frame rate with no slowdown whatsoever. Your mileage may vary depending on the phone or tablet you use, but this port does not seem to be that taxing; even low to mid-range hardware should have no problem keeping up. 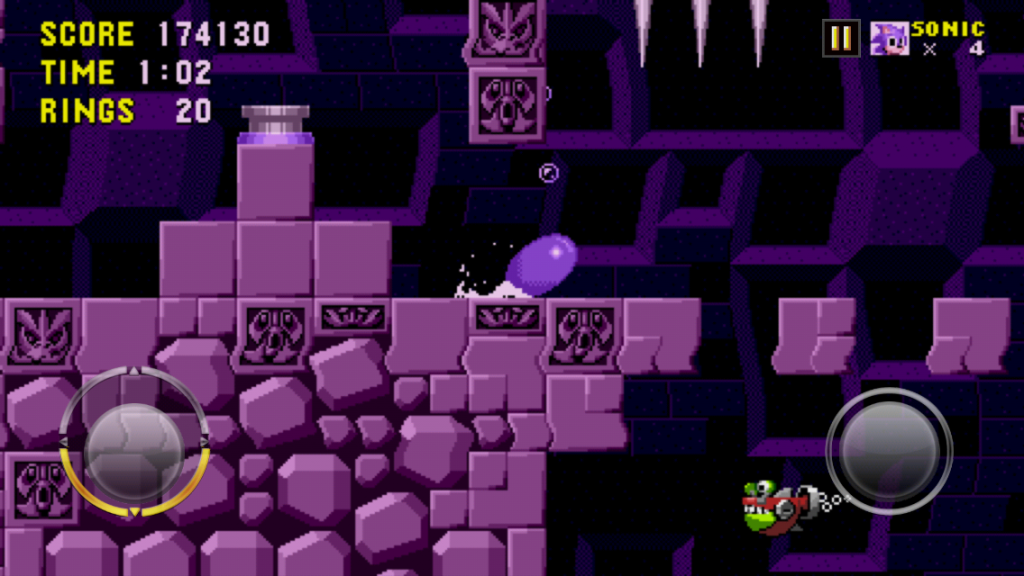 Now let’s talk about the gameplay. At its core, from Act 1 of Green Hill Zone to the final psychedelic special stage, this is still the Sonic the Hedgehog you know and love. However, this port has subtly tweaked the mechanics of the game and, while the changes are minor, they add up to a much more fluid and dynamic experience. The most noticeable change is perhaps the addition of the Spin Dash as a gameplay feature. This addition adds quite a bit of flexibility to the game, and if you’re like me, once you start using it, it will be tough to go back to versions that don’t have it. The move is turned on by default, but purists will be glad to know that you can turn it off in the options menu. This port also removes the restriction Sonic once had on his running speed. In the original game, Sonic’s upright speed was throttled somewhat; even if he was running down a hill, you had to curl up into a ball to get the full effect and see Sonic’s true speed. Now, the game plays much more like the later Genesis games in that you can achieve those same blistering speeds by running normally, so you no longer have to curl up to rocket down those steep slopes in Star Light Zone. These are dozens of small updates and tweaks like these scattered throughout the game, and while they don’t take away the occasional frustrations of Labyrinth Zone and Scrap Brain Zone, each one of them helps make your playthroughs that much better. 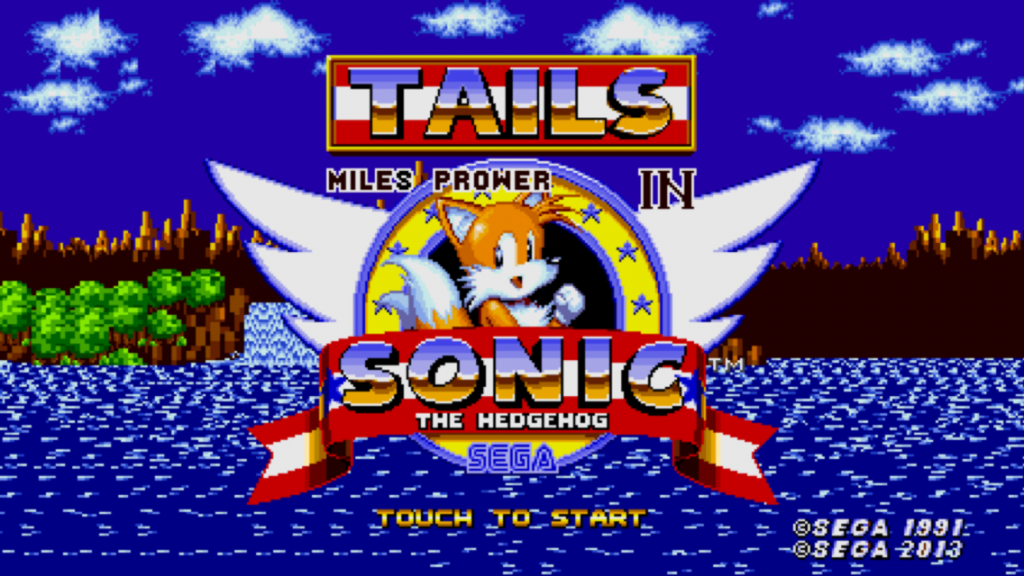 Even the game’s title screen changes based on the character you choose.

Minor tweaks aside, this port really kicks it into high gear by seamlessly incorporating additional characters into the experience. By completing the game, players can unlock Tails and Knuckles as playable characters, and they come equipped with their own traditional moves; Tails can fly, and Knuckles can glide and climb walls. These characters can then use these unique abilities to access new hidden goodies and, in a twist I wasn’t expecting, entirely new sections of stages. These new mechanics dramatically alter the flow of the game and give players the opportunity to approach these very familiar stages in fresh and exciting ways. The keyword here is fresh; as I explored Marble Zone with Tails and discovered all of its new secrets, it genuinely felt like I was playing the game for the first time again.

All things considered, this remastered re-release is a triumph, standing tall in stark contrast to the other bare-bones ports that dot the gaming landscape. The crisp presentation, additional characters, and troves of hidden goodies spice up the game without compromising the beloved Genesis gameplay that so many gamers hold dear. There’s something here for every fan, be they casual or hardcore, and only those who desire a pixel-for-pixel port of the original game or a physical controller in their hands are likely to find any fault in this package. The port is well worth the asking price on both iOS and Android, and aside from the original Genesis incarnation, it may well be the best version of Sonic the Hedgehog I’ve ever played.

Why? With additional characters, rock solid performance, and incredibly fluid mechanics, this remastered port of Sonic the Hedgehog stands as a shining example of a re-release done right.