Sony is no stranger to bad press conferences. The legendary Playstation 3 reveal in 2006 will go down in infamy, and references to “Giant Enemy Crabs” and “Riiiiidge Racer” still permeate today – even in yesterday’s Sony Media Briefing. But what doesn’t kill you can only make you stronger, and mistakes exist to learn from them. So while Microsoft may be bumbling around trying to figure out what it’s going to do about the Xbox One, Sony appears laser-focused on the future: and their crosshairs lie squarely on their competitors. Last night’s  show was a direct assault on the uncertainty presented by Microsoft, with one big, clear message: Sony respects the consumer’s rights to buy, sell, and trade games in whatever fashion they choose, an announcement that was met with a kind of thunderous cheering rarely heard during an E3 conference. Tweets from Sony representatives after the show also confirmed no region locking for games, and an upgradable HDD, just like the Playstation 3. Shots most definitely fired. 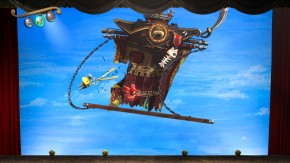 Puppeteer seems cute and charming if perhaps a bit standard.

Jack Tretton introduced Sony’s show by spitting game about the Playstation Vita: More than 125 games in just over a year, with more than 60% of its software bought online. 85 more games are slated for the device before the end of the year, including Batman: Arkham Origins, Counter-Spy, Destiny of Spirits, Doki Doki Universe, Killzone Mercenaries, and Telltale’s The Walking Dead: 400 Days. Furthermore, a great deal of Playstation 3 games are being ported to the system, like the God of War HD Collection and Flower. And while the big news is the upcoming Playstation 4, Sony remains committed to the Playstation 3, with more than 300 games currently in development. We’re treated to a smattering of some: Arkham Origins deals with Black Masks’ bounty on Batman’s head, sprawling out in to the open world of Gotham City. Puppeteer is a 2.5D platformer with a charming, theatrical visual style. Beyond: Two Souls gave us more of Jodie’s back story – namely her apparent military training and a tour of duty in Afghanistan, shown in clear contrast to the game’s more paranormal aspects. Gran Turismo 6 promises a complete overhaul of visuals, physics and simulation depth. The PS3 segment finished out with an announcement for a forthcoming $300 Playstation 3 bundle for Grand Theft Auto V, featuring an exclusive pair of headphones.

Moving on to bigger matters, we’re finally shown the Playstation 4 itself. In perhaps an odd twist of fate, it looks remarkably similar to an Xbox One – just smaller, and slanted. After some bally-hoo about upcoming Playstation 4 media services (Sony Video Unlimited, Music Unlimited, Redbox Instant and Flixster are all coming to the PS4), we’re finally off to the races and shown some games. First up to bat is “The Order:1886“. Despite it’s name, the game seems to take place in an alternate historical timeline where Victorian-era aesthetics merge with modern-day technology. A stage coach full of monster hunters is stopped in what looks to be modern-day New York City, complete with subway lines and more. Monsters emerge from the fog, and our crew opens fire on them with magically-charged guns – probably not the most original concept in the world, but at least it seems to be dealing with non-standard themes. Sony’s Shuhei Yoshida takes the stage to re-introduce us to the four games we saw back in February – Knack, Drive Club, Killzone ShadowFall and inFamous: Second Son. Of the four, three will be Playstation 4 launch titles, with inFamous: Second Son being held off until “Q1 2014”. Yoshida leaves us with a peek at a tech demo from Quantic Dream, the developers behind Heavy Rain and Beyond: Two Souls. “The Dark Sorcerer” involves an ancient summoning ritual that is unexpectedly cut short when the sorcerer flubs his line, revealing everything to be a sound stage. After humorous conversations with the director and extras, they prepare to resume filming as the video ends, Yoshida promising us that the full version will be streaming in Sony’s booth tomorrow. 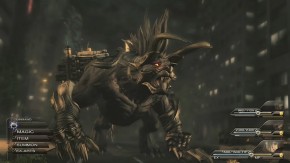 Just pretend this is running on a Playstation 4 and looks marginally prettier.

Adam Boyes comes on stage to drop some knowledge for us regarding the Playstation 4 and independent developers. Unlike Microsoft or Nintendo, Sony is going to allow independent developers to freely self-publish on PS4, and they’ve already gotten support from Transistor, Don’t Starve, Mercenary Kings, Octodad, Secret Ponchos, Ray’s The Dead, Outlast, Abe’s Oddysee HD, and Galak-Z, all of which will be debuting on the Playstation 4 first. Of course, Sony will have plenty of stuff from big names, too – they introduce pre-recorded footage of Square-Enix’s Tetsuya Nomura, who breaks the years-long silence on Final Fantasy Versus XIII, a game that was originally announced for the Playstation 3 seven years ago. The game has now been re-branded simply as Final Fantasy XV, and the gameplay footage on offer bore a passing resemblance to the Kingdom Hearts franchise, with a constantly-visible selection menu in the bottom left corner of the screen. Nomura also confirmed the existence of Kingdom Hearts III, with a very brief teaser showing Sora waking up on a beach with his keyblade. In contrast to FFXV’s more realistic graphics, Kingdom Hearts III keeps the cartoony, airbrushed look from the Playstation 2 games, but given an obvious HD make-over. One could say it looks both simple and clean.

From there, it’s off to Assassin’s Creed 4: Black Flag, putting you in the shoes of a legendary assassin that just so happens to be a pirate. Singing and drunken debauchery with your crew members on the beach quickly gives way to hunting down and killing servants of the king, but a signal flare brings forth a hail of cannon fire that sets ablaze the shanty town you and your crew were occupying. After a harrowing escape, you board your ship and return fire – unfortunately for Ubisoft, mounting performance issues get the better of them, and they’re forced to end the demo early. Given reports of how completely buggy Assassin’s Creed 3 also was, perhaps this outcome was not surprising – but worrying just the same. Coming off AC4 we’re thrown in to Watch_Dogs, demonstrating just how easily you can control the world from your character’s smart phone. Evading the police becomes a simple affair when you can remotely hack garage doors and fences. Everything in the game can apparently be hacked, and the demo concludes with the player taking control of security cameras and electronic displays remotely to help an ally escape capture. Even smartphones in the real world can help, with Ubisoft demonstrated their companion iPad app that allows a second player to assist in hacking electronics in the world to work in your favor. To be honest, it almost looks a little too easy – the player seemed a bit unstoppable for most of the demonstration, simply using hacking as a means to get out of any and all trouble almost instantly. What can’t be solved by hacking is taken care of with violence – bullet time shooting sequences and light melee combat were also featured. 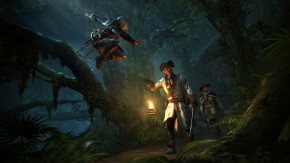 Things picked up speed as the conference began to sprint towards its end: brief looks at a next-generation NBA 2K game was shown along side a trailer for the decidedly-action-y Elder Scrolls Online, followed by a CG-only teaser for an Avalanche-studios developed Mad Max game. Despite the typical curse of licensed software, Avalanche was responsible for the gleefully chaotic Just Cause 2, and it’s easy to see how their design sensibilities would make for a nice fit with the Mad Max franchise. Jack Tretton comes back out to tell us that there are more than 140 PS4 games currently in development, and all are compatible with the system’s cross-game voice chat, new friends list system, video livestreaming and sharing. Existing Playstation+ memberships will also carry over to the Playstation 4, and will be required in order to experience online multiplayer on the new console. All of PS+’s existing features, like monthly free games, will also continue, with PS+ members getting exclusive access to a special, exclusive version of Drive Club at launch.

Tretton leaves us with one final game: an extended look at Bungie’s upcoming Destiny MMO. Taking place after an alien race nearly wipes out humanity, Destiny looks to be massively multiplayer in the same way that Phantasy Star Online 2 is – you group up with your friends and take on largely instanced missions, but occasionally you’ll run in to “public events”, where you encounter other teams of players and take on larger objectives. The game looks plenty fun, melding magic, technology and alien weapons with Bungie’s unique sense of style. Tretton comes out one final time and drops the final bombshell: Playstation 4 launches this holiday season for $399, a full $100 less than Microsoft’s Xbox One. The show closes out with one final declaration of the importance of consumer trust and ownership of their content to more thunderous applause.

I’d hardly say Destiny brought down the house, but it was cool regardless.

While one could make the argument that Sony also seemed to lack the ever-important singular killer app, I feel it did a much greater job bringing out heavy hitters like Tetsuya Nomura to announce long-awaited fan favorites. And even though Bungie’s Destiny is slated to come out on a wide array of platforms, you’d almost never know it, given how hard they’ve pushed to associate that game with the Playstation 4 hardware. Sony’s goal is very clear: hit Microsoft back as hard as they can by courting all of their favorite developers and providing a safe haven from all of their content restrictions. I wouldn’t quite call their show a grand slam, but they definitely did not slouch in the areas that mattered.

What’s it looking like for you guys? You more interested in a Playstation 4, or an Xbox One? Or are you just waiting to see what Nintendo’s up to?

SEGA Has Transferred All Index Shares To Sawada Holdings