If you could get past the fact you could finish it in three hours or less, Ducktales Remastered is a great way to update an old, classic Disney game for a new generation. Unfortunately, Disney’s second HD remake, released roughly a month later, doesn’t fare quite so well – though that may be less of a problem with the game itself and more to do with its source material.

Despite hearing about how awesome everybody thought the original Sega Genesis version of Castle of Illusion was, I never really could get in to the game myself; something about it felt too dated, to me. It was trapped in that weird post-SMB3, pre-Sonic 1 era, and a lot of the mechanics never really seemed intuitive enough for me to bother clearing the first world. Illusion HD does away with some of the weirder control oddities – like having to press jump twice to make Mickey successfully attack enemies – but it reveals a game that might not have actually been worth remaking in the first place. 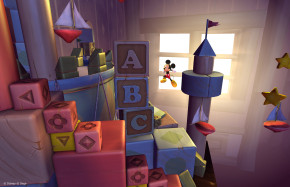 There’s nothing really explicitly wrong with Castle of Illusion HD, to be fair. It has wonderful visuals, orchestral music by the legendary Grant Kirkhope, and tight controls. The problem is that it rarely does anything unique. Remade, Castle of Illusion HD turns in to one of the hardest kind of games to review: one that is completely average. Outside of what I just listed, there is not much to really praise it for, and nothing to really complain about, either. The game simply is, leaving me with disturbingly little to talk about.

In reviews, the easiest things to talk about are complaints, because one can at least offer some constructive criticism. But there isn’t much here to complain about. I suppose we could start with the new narration – as with many games nowadays, Illusion HD features a number of extended story sequences. That’s not to say the original Castle of Illusion was bereft of storyline, but the HD Remake goes whole hog with a storybook narrator and a lot of sickeningly-sweet, empty dialog that honestly made me feel like I was playing a game for toddlers. Sega Australia fortunately had the foresight to include an option to disable all dialog, leaving you with pure gameplay. Though in an odd twist, you can turn narration off but leave subtitles on and simply read everything the narrator says, if that’s more your style.

Contributing to the feeling that Illusion HD might’ve been a game made for young children was the level of challenge contained within. Castle of Illusion HD starts out almost embarrassingly easy – you’ll breeze through the first world or two without so much as batting an eyelash, but thankfully, it doesn’t last forever. Over the course of the game, Castle of Illusion HD gradually ramps up its difficulty until I was surprised to find myself running out of 1ups and getting multiple Game Over in the final stretch of the game.

If we’re being honest about the game’s problems, there’s one that simply cannot be ignored: that “end of the game” section I just mentioned? It took me about 90 minutes to reach, which for reference, isn’t much longer than one of Disney’s own animated movies. To drive the point home: Castle of Illusion HD took me about half as long to finish as Ducktales Remastered, and I was already hesitating to recommend that three hour game at $15. As you can imagine, $15 for Illusion HD‘s 90 minutes is an even more difficult pill to swallow and is my biggest legitimate complaint I can muster against the game. 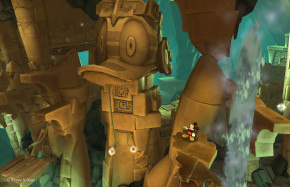 It cannot be said enough: this game is gorgeous.

Especially given, as previously stated, the game is completely milquetoast. It contains no “hook”, no unique gameplay mechanic to separate it from the pack. It is simply a middle-of-the-road platformer in which you play as Mickey Mouse. Sega Australia tried to go to great lengths to imbue the game with the so-called “Disney Magic”, but even that’s not really special anymore; stellar animation, beautiful visuals, and great music aren’t things exclusive to Disney games. It’s a sad truth that production value alone cannot elevate an average game above its peers; especially not when you have scores of independent games running creative circles around an average platformer like this. Even The Great Giana Sisters remake introduced new game mechanics to elevate it beyond merely being a cheap Super Mario Bros. clone.

Do not think I hate Castle of Illusion HD; I just simply do not know who it is for, and I start to question who was even asking for a Castle of Illusion remake to begin with. I often wonder if maybe people are getting the game mixed up with Capcom’s Magical Quest Starring Mickey Mouse, a game that seems to have the creative spark that Castle of Illusion is so desperately missing. As it stands, Castle of Illusion HD is probably great for fans of Mickey Mouse. But unless you’ve somehow avoided playing any 2D platformers in the last 20 years, you won’t find much here that you haven’t already seen a hundred times in other games.

Sonic Jump gets a new update