Return to the Winter Olympics

The Mario & Sonic series has become a prolific franchise for Sega in recent years. A total of three games were regularly released for the Wii, and the series is ready to turn its attention to the Wii U in the form of Mario & Sonic at the Sochi 2014 Olympic Winter Games. After briefly trying out a few of the game’s events, I found it be relatively engaging in ways that previous titles weren’t.

Paired figure skating is fun, but it’s often imprecise and only really takes off with another player in tow.

Mario & Sonic at the Sochi 2014 Olympic Winter Games, hereafter referred to as Mario & Sonic 2014, offers up 16 new and improved events, and I demoed two of them. The first, paired figure skating, has you pair up with a friend (the game encourages you a male/female pairing) and perform various motions with the Wii Remote, with swiping to simulate hand movements and twirling to emulate spinning jumps among them. At times, you will need to “hold hands” with your partner by having them hold the top of the controller and the A button while you hold the bottom of the controller. This leads to you performing some sillier moves, such as swinging the Wii Remote back and forth and literally spinning your partner around you as you both keep grip on the controller. The game benefits from the Wii MotionPlus technology as most movements do require some degree of precision and accuracy to successfully pull off. However, other tasks such as swinging seemed just as content with broad and borderline random motions as they did with a precise following of the prompt. 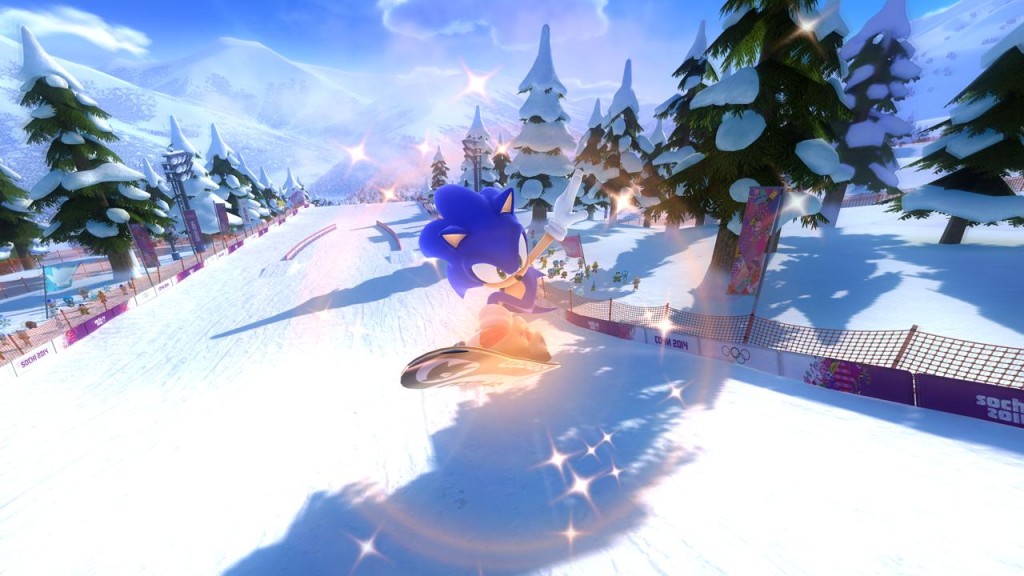 Snowboarding was easily the highlight of the demo.

The second event I demoed was snowboarding. Played with the Wii U GamePad, players fly down a steep, snow-covered mountain while grinding on rails and doing tricks off massive jumps. This event works surprisingly well. Tiling the GamePad left and right steers your character and keeps them on balance while grinding. Flicking the GamePad is incorporated into leaping off jumps and hitting trick targets. Swiping the touch screen also allows you to pull off certain tricks. Although the tilt control took a big of getting used to, the rest of the event proved to be more engaging than I expected; once it ended, I actually wanted to stay put and play it again. I will be posting a video of the event later today.

At the end of the day, Mario & Sonic 2014 still follows the series paradigm of providing gamers with a more casual and broad experience, and some will simply never be attracted to this. However, it seemed more responsive and engaging than its predecessors, and if the rest of the events work as well as these two did, the game will be a definite step up from those that came before it.