Another World of Fast-Paced Action

Sonic Lost World has attracted a level of hype and anticipation beyond that of most Wii U titles. Its somewhat radical changes to the Sonic formula have divided and intrigued fans in equal measure, and millions of fans desperately want to know how these changes will impact the overall gameplay. With the game’s release just weeks away, I finally got to play it for myself, and I liked what I saw.

For the most part, the game’s myriad new mechanics work well. The addition of a run button enables more layered gameplay by giving you the ability to tear through the level without sacrificing the precise control required for the game’s platforming segments. That said, maintaining momentum while running can be difficult as performing sharp turns or weaving in and out of obstacles often slows you down considerably until you learn how to do this properly. The new parkour system is engaging, works well, and gives you much more flexibility in how to approach a given level. While the majority of the game is a fair bit slower than what Unleashed and Generations offered, it should still be fast enough to satisfy the majority of fans and casual players that pick it up. 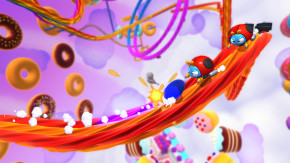 I played all four of the demo’s levels, and each one brought something different to the table. The first, Windy Hill, focused on spherical levels, much like the Super Mario Galaxy series, but with a decidedly Sonic twist. There was a heavy emphasis on multiple paths and finding your own way through the stage. The level design doesn’t encourage one route over another, so you really are free to approach things as you see fit. The second level (creatively referred to as Dessert Ruins on the loading screen) served up a heaping helping of 2D platforming. Again, thanks to the addition of a run button, slower movement is much more precise this time around, so although the stage wasn’t particularly speedy, the platforming felt satisfying and fun. If you enjoyed the 2D platforming stages in Colors, you’ll enjoy these stages as they’ve been markedly improved for Lost World. 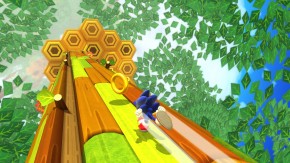 The forced running stage is great. If you’re looking for fast and frantic, this level’s for you.

The third, another level in Desert Ruins, incorporates spherical level design into sections of forced running broken up by wind tunnel segments. The stage was intense and creative throughout, and although the controls were a bit sensitive, it was still one of my favorite levels in the demo. The combination of incredible speed and tricky level design made for a hell of a ride. The final stage, Frozen Factory, took place in a casino, complete with collectible change and giant slot machine reels. As you might expect, this speedy level featured loads of bumpers and obstacles to bounce off of, and this made for a fairly chaotic run in some sections. The middle of the level breaks up the action with a brief pinball machine segment, which was a fairly fun distraction aside from the fact that you need to hit a specific target to exit the section and the nature of pinball games can make this task a bit trying.

Sonic Lost World‘s graphics are nothing short of impressive. The cartoonish and heavy stylized art direction looks fantastic and ensures that the game will age well. The textures, color palettes, and animations are all vibrant and bring the game to life in a fantastic way. The levels themselves are awash with detail and run at a rock-solid 60 FPS. When you put all this together, it creates what may well turn out to be the best-looking Sonic title ever and one of the better overall franchise entries in recent years.