What is a Sonic the Hedgehog game? I suppose you could go back to the source of it all, to the very first Sonic the Hedgehog on the Sega Genesis. Sonic was Sega’s flagship franchise, positioned to rival Nintendo’s Super Mario Bros. Whereas Mario was a slower character who typically hopped around flat, boxy environments, Sega emphasized Sonic’s speed, as he rolled down curved hills and ricocheted around pinball-themed environments. Sonic was the Anti-Mario, but somehow, Sonic the Hedgehog has begun borrowing more and more elements from his plumber rival. It all started with Sonic Colors on the Wii, Sega’s first Nintendo-exclusive Sonic game for consoles. Developers at Sega would later come to admit that Colors was intentionally designed to appeal to the “Nintendo Audience”, by borrowing slivers of inspiration from Mario. Those slivers of inspiration have grown in to a full-on homage in Sonic Lost World, a game that more closely resembles Super Mario Galaxy than anything Sonic the Hedgehog. 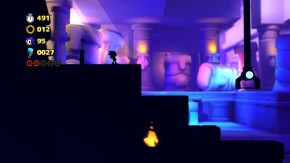 Can’t have a platformer nowadays without one of these, I guess.

To single out Super Mario Galaxy as Lost World‘s only obvious point of inspiration would be selling the game short. This is not a vague comparison; Nintendo’s signature plumber is written all over this game, with occasional hat-tips to Yoshi’s Island and Donkey Kong Country, to boot. You’ll be dodging what are essentially reskinned Bullet Bills, avoiding tropical-themed Thwomps, and facing off against bosses that recall encounters with the Koopa Kids. Sonic’s controls have been reworked to fit this new ideal, too: the player now has three tiers of speed available, with walking, a specific button dedicated to running, and the classic Spindash. On paper this sounds like a great idea, but in execution it ends up being sort of clumsy. A large part of this is because Lost World can’t seem to decide how fast Sonic should actually be; sometimes, pushing the analog stick to the left or the right is slower than moving Sonic forward and backward, but other times it is not, and many levels play with Sonic’s speed in similar ways. As such, you never get too comfortable controlling the game, because it is constantly rewriting the rules about how Sonic moves. This is compounded by the awkward parkour system, which is supposed to let you scale surfaces for as long as you hold the run button. The way levels are set up, I generally spent all of my time in Sonic Lost World holding the run button, frequently causing Sonic to attach to surfaces I didn’t want him to. Canceling a parkour move is equally as frustrating, as you can never quite tell what direction Sonic is going to travel when you jump out a wall run. This isn’t even touching on the confusing homing attack system, where you have two very similar homing attacks on two different buttons, and are punished for using the wrong attack on the wrong enemies. Controls in videogames need to feel like an extension of the player; something you can do without thinking. Even after 6 hours of “practice”, controlling Sonic in Lost World can feel like a fight against the game.

As if problems with control weren’t enough, level design doesn’t really fair much better. One of the more common complaints is that Sonic games are “hold right to win” (or, alternatively, hold up to win). Those statements have always been a bit hyperbolic, as you are usually required to do more than simply hold a single direction until you reach the goal. In games like Sonic Unleashed, it actually manifested itself not unlike a racing game: though you were constantly boosting forward, it was more like the gas pedal on a car, with one’s ability to take corners cleanly and quickly being a larger priority. Influences from the Mario franchise once again dominate Lost World, as the game features almost nothing in terms of sloped environments. Sonic’s trademark valleys and hills have been replaced with what are essentially flat floors and square walls wrapped around floating tubes in the sky. This is “hold right to win” by the purest definition; in Frozen Factory’s Casino stage, I managed to successfully bypass most of the stage simply by running in almost a straight line all the way to the finish. Other levels are a little more puzzle oriented, but once again the game’s issues with control tend to get in the way, as does its oddly unforgiving nature. Despite efforts to soften some of Sonic’s harder edges, Lost World is packed full of scenarios where insignificant mistakes mean instant death. Bottomless pits are more prevalent now than ever before, and all it takes is an all-too-frequent misfired homing attack for you to meet your demise. I found myself staring at the “Game Over” screen more in Sonic Lost World than I have in any other Sonic game, and that’s even counting notoriously difficult games like Sonic Advance. It never happens frequently enough to instill a sense of tension, either; just, once every world or two, you run in to something that instantly kills you without much warning. With a few exceptions, Lost World‘s level design is cheap and simplistic. 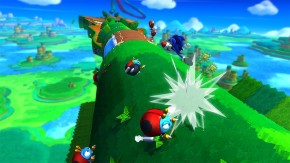 Remember the old games? These guys are from those! Haven’t seen that before!

Part of the reason I found myself at Lost World‘s game over screen so often is because it also makes a lot of unexpected changes to long-standing game mechanics. The most egregious of which is the fact that getting 100 rings will no longer award you with an extra life, making 1ups a pretty scarce resource. A side effect is that there is no incentive to collect more rings past a certain number, because Sonic will only drop a fraction upon taking damage. Despite this, Lost World still tempts you with hard-to-reach secret areas full of hundreds of rings that you rarely need to risk collecting. You could technically say that rings count toward your score at the end of a level, but points don’t really mean anything, either. Sonic Lost World marks the first Sonic game in 14 years to not grade you on your high scores, and yet, it is still very preoccupied with its own scoring system. Whole entire levels are based around the concept of amassing lots and lots of points, but there’s absolutely no reason to. Even in the classic Sega Genesis Sonic games, reaching certain score thresholds would award you with extra lives or continues, and in a game like Super Mario Galaxy, coins and other things are added up at the end of a stage and put towards winning extra lives. Lost World, on the other hand, gives you a homing attack combo system for defeating enemies, but the points you are awarded for destroying large groups don’t contribute to anything, not even leaderboards. It feels like something is missing, like they took out game mechanics but didn’t change the game to compensate for their absence, because there’s absolutely no reason for the game to play like this.

Sonic Lost World is classic Sonic Team, through and through. That’s not exactly a good thing; Sonic Team spent close to a decade slowly flushing the Sonic franchise down the toilet with games not entirely unlike Lost World. It’s not an especially bad game, it just seems confused about what it wants to be. Not all of its ideas stick. Even if you didn’t like games like Sonic Unleashed or even Sonic Generations, you have to admit that they were doing things that no other game there was really doing. To so readily throw away what those games did well only to chase after Mario’s glory marks a significant misstep. History does not often remember imitations; how many Super Mario Bros. clones from the NES and SNES are still around today? Sonic the Hedgehog got to where he is by being intentionally different than Mario, and though Lost World does try to put its own spin on things, it very obviously wears its inspiration on its sleeve. We’ve already been through a whole era of weird, experimental Sonic games, and I don’t know about you, but I’m not ready to go back.