Dimps, what happened to you? Your Sonic Rush on the Nintendo DS might have been the game that saved Sonic the Hedgehog. It released in 2005, along side some of the worst dredges of the Sonic franchise, and provided the only shining beacon of hope that Sonic could still be fun. Sonic Lost World for the Nintendo 3DS continues a downward spiral first glimpsed in Sonic Colors for the DS, a game that, while not terrible, was noticeably inferior to previous offerings. No such qualms for Lost World; this game can be generously described as a “headache”. Speaking to you as somebody who enjoys Sonic games, and has willingly completed even some of the worst entries, it also marks one of the rare Sonics that I had no desire to finish. But finish it I did (albeit very slowly), and it was so I could bring you this warning: do not play Sonic Lost World for the Nintendo 3DS. 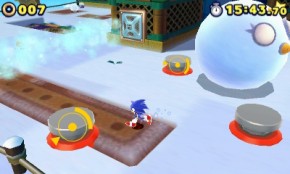 By far the worst level of the bunch.

It all starts so unassuming. The first two Windy Hill stages seem so good, better than their Wii U counterparts. Lost World 3DS overall features more complex level designs that aren’t afraid to change things up on you and make you run in more directions than simply “forward”. Therein lies part of the problem: it doesn’t take long before levels become too complex for their own good. Portable games are designed to be for quick hits; something you can play for a couple minutes on the bus or wherever. Levels in Lost World 3DS start at being 4-5 minutes long, and only get longer as the game progresses, with levels near the end of the game demanding upwards of 20-30 minutes to be completed. Stages are often broken up in to multiple parts, with short loading screens between sections. Any individual section is long enough to be a complete stage on its own, but frequently you will find yourself in scenarios where levels keep going, and going, and going, with four or five sections stitched together in to a ridiculous marathon.

It’s great that Dimps had no shortage of ideas, but that’s another part of the problem: so much of this game could have been safely cut for simply not being very good. Not only are these levels long, but they favor extremely narrow pathways suspended over huge bottomless pits. Many stages consist almost entirely of bottomless pits, with nothing but parkour wallruns to keep you from falling to your death. When that’s not giving you headaches, you have to contend with tedious or unclear level design. I could spend the entire length of this review describing one such level (Frozen Factory Act 3), which gave me a countdown timer of 21 minutes. I spent at least 15 of those minutes wandering around in circles, not sure how to progress. Only after a significant amount of experimentation with a snowman’s decapitated head did the path forward reveal itself to me; but the solution was nothing Lost World 3DS ever communicated to me as a possibility. Even worse, after figuring out the obtuse solution to this awful puzzle, the level kept going for at least another 10 minutes. Sections like these should have been excised from the game; if each stage in Lost World 3DS was boiled down to the very best 2-3 minutes out of 20 minutes of abysmal ideas, we would almost have an enjoyable game. Almost.

Poor level design is compounded by poor controls. Much like level design, at first, these appear to be vastly superior to its Wii U big brother: the confusing homing attack system is gone, with Sonic’s kick attack acting as a projectile to stun enemies. More things can be locked on to, as well: collectible power-ups can be homing attack targets, and even 1ups, making the game seem vastly more accessible. Unfortunately, that quickly falls apart as levels get more and more narrow. The biggest culprit is Sonic’s air control, which ignores Lost World‘s “run button” concept and accelerates Sonic to maximum speed whenever he leaves the ground, regardless of what buttons are being pressed. The result is that it is remarkably easy to overshoot landings, a major problem in a game with so many bottomless pits. You can’t even adjust yourself in mid-air, either, as Sonic must first rotate to face whatever direction you’re holding the analog stick. This makes fine-tuning missed jumps a complete nightmare, and more often than not, trying to adjust Sonic’s direction in mid-air will just make everything worse. 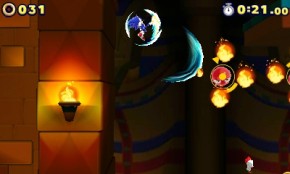 A projectile-based kick is a lot smarter than the weird alternate homing attack seen in the Wii U game.

That’s not even the worst of the controls, either. Lost World 3DS plays like the first game where Dimps discovered gyroscope controls, as they frequently turn up at the worst possible times. Certain power-ups require you to use the gyroscope, as do certain level gimmicks, but the worst offender is the handheld-exclusive special stages. In order to win one of the game’s seven chaos emeralds, you must guide a flying Sonic the Hedgehog through space by physically moving and tilting your 3DS in order to collect colored spheres. The issue at hand is that the gyroscope sensitivity is frustratingly low; the only way to accurately direct Sonic where to fly is to stand up and gesticulate your body wildly in all directions. Once again, I should remind you that this is a portable game: more often than not, when the dialog box would appear asking me if I wanted to visit the special stage, I was forced to decline simply because I was somewhere that was not conductive to standing up and twirling around like a pretty princess. Your only solace in this situation is that unlike most Sonic games, collecting chaos emeralds thankfully does not unlock any sort of “true” ending, meaning special stages can be safely ignored. Since the game itself never actually communicates this to you until it’s too late: you’re welcome.

Dimps is more like a tool; their game development history does infact reveal good games. A closer look reveals most of their best releases are ones where they heavily collaborated with other developers, such as Street Fighter IV with Capcom. Sonic Lost World for the Nintendo 3DS is basically a trainwreck. It may not seem that way at first, but a promising start gives way to awful gyroscope controls, excessively long stages, and extremely poor level design. This is what happens when Dimps is left to their own devices while the rest of Sonic Team focuses on the primary console release. I wouldn’t be surprised if Sega also skimped on cartridge size, because even the music and full motion video are of awful quality. I suppose if I had to find one good thing to say about Lost World 3DS, it would be that it is not Sonic 2006 levels of bad. Sonic 2006 was so riddled with game-breaking bugs that it was nearly unplayable; whereas Lost World 3DS is just simply a bad game. Like a lot of older Sonic games, it had the potential to be really, really good, but it wasted that potential on sloppy, bloated game design. Steer clear at all costs.

UPDATE: GamesTM Teasing Next Sonic Announcement, So Some Thought