A New Dimension of a 2D Classic

Another day, another port of Sonic the Hedgehog. The proliferation of this game across modern hardware has reached something of a saturation point; we’re running out of consoles and devices where you can’t play this game in some form. Of course, each port has its own distinct quirks; whether’s its loaded with features and updates like Taxman and Stealth’s remastering or a complete disaster like the GBA port, no two versions of this Sonic are the same. Now, thanks to Sega’s M2 division, the game has arrived on the Nintendo 3DS with new features and a slightly steeper price tag. Is there enough in this package to separate this port from the pack, or is your money better spent elsewhere?

As you might expect, 3D Sonic the Hedgehog is more or less defined by its new visual effects. The added 3D carries through every inch of the game’s presentation, and M2 did a great job of refining the game to take advantage of it. Sonic looks noticeably farther away as he dashes behind trees and pillars, and the backgrounds scale in depth according to their layering and parallax. Star Light Zone and Spring Yard Zone look the most striking in 3D, but the entire game benefits from this conversion. Admittedly, the 3D isn’t all that intense, but it sharpens the graphics considerably and gives you a comfortable, if conservative, sense of depth. 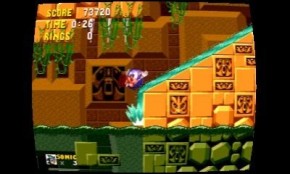 Classic mode emulates a CRT TV, raster lines and all.

There’s more to it than that, though. You have the option to view the 3D in “fall-in” or “pop-out” mode; the former simply gives the backgrounds some depth, while the latter makes foreground objects and the HUD really pop off the screen. Both modes provide an experience different enough to warrant exploration; I personally preferred pop-out mode much more, but you can decide which works better for you. Finally, there’s a fun screen mode called Classic that emulates the look of a CRT TV, complete with raster lines and blending colors. Although you probably won’t play this way for very long, it’s still fun to mess around with.

There’s a few more options I should mention. Both the international and original Japanese versions of the game are included, so if you passionately prefer one over the other, they’re both here and waiting for you. Also included is the option to emulate sound from either the original Genesis or the Genesis 2. The differences are very minor and only the most hardcore fans are likely to notice them, but the choice is there. Additionally, you can map the control scheme to any buttons you want. L and R can jump. B can pause the game. Everything can be the jump button. It’s incredibly flexible.

Graphics and options aside, though, it’s still just Sonic the Hedgehog. You know how it looks. You know how it plays. There’s nothing new to say about it. That said, it’s still incredibly fun; this is a very smooth and responsive version of the game. The Spin Dash is included and activated by default, but purists can dig into the options menu and turn it off. Also included is a “special” mode that brings you right to the level select screen when you start the game. It’s a minor addition, sure, but it’s a very convenient way to get right to the levels you want to play.

All things considered, 3D Sonic the Hedgehog is another quality port of a beloved Genesis classic. The graphical effects give it its own unique twist, and your individual experience with the game is surprisingly customizable. Ultimately, it doesn’t quite scale the heights that Taxman and Stealth’s port did, so if you’re looking for what is essentially the definitive port of Sonic the Hedgehog, you should stick with that version. However, if you’re dying to experience the game in 3D, or you simply want a quality port of it on your 3DS, give this one a try. There are far worse ways to spend $5.99.

A look inside the Hedgehog Engine