It’s been a while, hasn’t it? And yet, despite the year-plus length of time since the last SAGE, it still feels almost like it was yesterday that I was baffled over another release of Sonic Run 3. Sadly, there’s no appearance by that game this year, but perhaps it is for the best. “Act 1” of this SAGE is seeing us off with 28 booths, and it’s my job to guide you through 14 of the available games. The other half will be handled by Louis Balzani. And today, since it’s so well represented, we’re gonna open with a big ol’ spoonful of… 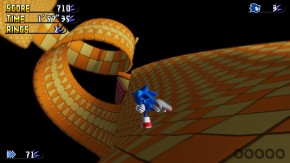 I’m always okay with fiddling around in SonicGDK for a bit.

SonicGDK (Public Release 8)
At this point, you’d think I’d be running out of things to say about SonicGDK, and you’re not too far off. Thankfully, as you’ll see below, SonicGDK is slowly gaining a bit of a foothold, and the code base itself continues to improve with an ever-increasing list of features and fixes. It’s really an issue of control; SonicGDK‘s biggest competitor right now is undoubtedly Sonic Generations, which comes pre-loaded with a bunch of enemies and objects ready-to-use. But with that comes a set of very, very strict limitations, as no new game mechanics can really be added. Most of the Sonic Generations mods that try to push past those limitations often break the game in ugly, strange ways. SonicGDK‘s obviously a lot more complex to modify, but that’s only because you’re afforded so much control over what you can do. New enemies? New level gimmicks? New abilities? The sky is the limit, as long as you put in the work and learn how. Here’s hoping this continues to gain momentum; some really amazing stuff is possible. 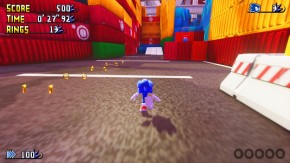 Havok Harbor is a color explosion in a good way.

Sonic Lost Adventure: Havok Harbor
There’s no finer example of that than the Havok Harbor tech demo for Sonic Lost Adventure. Havok Harbor takes a really simple idea and implements it wonderfully. The entire map is compromised of nothing but an endless labyrinth of shipping containers, stretching as far as the eye can see, but they’re arranged in such a way as to create something focused and fun. When you break it down, it’s just a bunch of rectangles, but as long as you know how to arrange them properly, that’s really all you need. There’s plenty of secret routes to discover, the map is colorful and varied… Havok Harbor should stand as the poster child for what is possible with SonicGDK. That being said, it IS a little rough around the edges; I got caught on some geometry more than once, the game froze a handful of times, and I managed to fall out of map boundaries in the 2D segment. It’s also a little loose feeling, obviously lacking the fixed camera and scripting typically seen in Sonic Team’s games. But there’s a lot of great ideas here, and a significant amount of visual polish. The creator says the next release will look even better, but I think it’s already pretty gorgeous. This is almost (but not quite) professional-quality work. 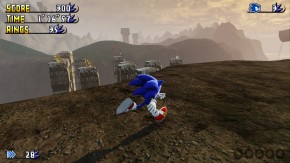 Literally the only legitimate platforming in the entire level.

Project Endless
In contrast to Havok Harbor, we have Project Endless, a SonicGDK mod based on an older release of the code base. Whereas Havok Harbor lead you through its map like a professional, Project Endless involves a huge, mostly empty world with a couple of loops. Giant arrow signs are posted in some locations in an effort to push you in the right direction, a tactic that seems a bit blunt when you could so much more easily lead players with interesting level design. You often hear the term “screens” used to describe level design; it’s a good short hand way to describe what is essentially a “room” containing a single puzzle or action element. Project Endless doesn’t really have much in the way of this type of design. Everything’s spread out across what feels like miles of featureless landscape and there just needs to be more stuff out there. More enemies, more rings, more obstacles to traverse, more landmarks. Something. Anything. It doesn’t help that I also fell out of the map twice; with a little bit of effort, it’s remarkably easy to simply walk off the edge of the world, especially if you fall in to the water. And then there’s the case of this game’s framerate problems. I don’t exactly have the hottest computer on the block these days, but it seemed to me like swinging the camera in certain directions would inadvertently cause the framerate to drop like a rock for seemingly no reason. In other areas of the map, framerate problems came and went every couple of seconds, and when the framerate gets low enough, Unreal Engine 3 starts doing some very, very strange things. At one point I was approaching a cliff, and after one particular instance of the framerate dropping, I had suddenly been teleported off the cliff and was now falling. This lead me to try and turn down the graphics options to speed up the framerate, only to discover there was no difference between “Minimum” graphical quality and higher settings. I can only assume making this map took quite a lot of work, but as much as I hate to say it, it’s going to need a lot more. 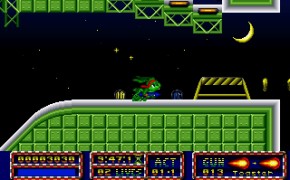 Don’t know how to work DOSbox? I recommend using D-fend instead.

Sonic With a Gun
This is the second showing for Sonic With a Gun; it originally turned up at SAGE 2010 with a short demo. It has now grown in to a full-blown game of its own, representing a curious cross between the original Jazz Jackrabbit and the six zones featured in 1991’s Sonic the Hedgehog. Rather than import graphics straight from the Sega Genesis, each world has been given special attention to fit within the visual aesthetic of Jazz while still obviously remaining faithful to the well-worn Sonic level tropes. To be perfectly honest with you, I always liked the concept of the Jazz Jackrabbit games more than their execution. It’s essentially Contra, but you’re usually moving way too fast to see what’s ahead of you. Impressively enough, that doesn’t seem to be as much of an issue in Sonic With a Gun, which is pretty good at making sure there’s enough stuff in your way that you don’t usually go running head first in to hazards. For all of the things this game does right, as you progress through the game some of the levels do make some questionable decisions. For example, in the second world (Marbelava, I think), one section of the stage involves you jumping up some falling blocks to reach a checkpoint… but there’s only a finite number of blocks and if you don’t make it to the top before they all finish falling, your only solution is to commit suicide so you can try again. Not cool. It was so jarring and out of place that I actually thought it had to have been a glitch, at first. Later levels seem to rub up against similar limits, with occasionally wonky collision detection and hacky “loops” that look more awkward than awesome. With a little more polish, this could be as good (or even better!) than the original Jazz Jackrabbit, but it’s not quite there.

And so ends the first day of SAGE reviews. See you guys next time, with decidedly less SonicGDK!