A Reboot takes us to Worlds like Mars, where we meet Da Rock

Welcome to the second review slew for SAGE 2014 Act 1! If you’re like me and are afraid of all the numbers I just said, worry not! Because there’s a bunch more fangames I’m gonna talk about, and all you have to do to get away from the numbers is keep reading! Your very life may depend on it!* 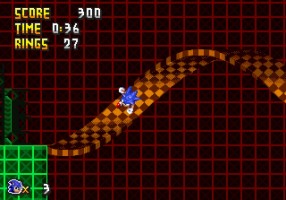 Round and around he goes

Sonic Worlds Delta
If you’re just joining us for the first time, Sonic Worlds Delta is basically to 2D Sonic games what SonicGDK (reviewed yesterday) is to 3D Sonic games. But while SonicGDK still needs a bit of spit polish here or there to fix up its camera system and floaty physics, Sonic Worlds Delta is a mature, polished engine, absolutely begging you to make games with it. It supports four playable characters (Sonic, Tails, Knuckles and Amy), a huge host of gameplay and level gimmicks spanning all of the 16bit Sonics, features custom level selection menus, controller configs, and even an example boss encounter. Short of Sega’s official code, Sonic Worlds is probably the best, most complete Sonic engine available anywhere, and if you use Multimedia Fusion 2, you owe it to yourself to check it out. I’m old enough that I remember the days before Sonic Worlds, and this is an amazing piece of code, and it’s only going to keep getting better. 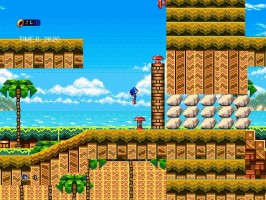 Well, at least he doesn’t have blue arms.

Sonic Reboot
On the subject of “remembering the days before Sonic Worlds“, we have Sonic Reboot, a Game Maker fangame that is quite clearly not using any pre-existing codebase. This has all the hallmarks: Sonic animates too quickly, there’s too much empty space everywhere, some enemies move around the level backwards, the game’s HUD uses inconsistent fonts, enemies don’t explode when they’re destroyed… I realize there’s some pride in making everything yourself, but the creator of this game should really look in to something like Sonic Worlds, if at all possible. (I think there’s a couple Game Maker Sonic engines kicking around, too, though I can’t vouch for them). Also, here’s a protip from somebody who’s been there and learned this lesson already: Sonic games are not made better by requiring you to bounce on enemies multiple times in order to destroy them. 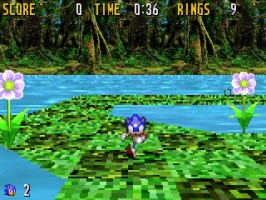 Mars is a lot greener than I remember.

Sonic Mars Remake
I’ve never really understood the infatuation with remaking Sonic X-treme; in my opinion, the game was canceled for a reason, and trying to recapture the spirit of that game today seems… odd, to say the least. This goes even further back than that, to a 32X prototype that eventually inspired Sonic X-treme. Unfortunately for us, this game was made using Multimedia Fusion’s Mode 7 object. Now, I want you to ask yourself: how many Mode 7 platformers did we get on the SNES? The answer is zero (Yoshi Safari doesn’t count). The reason why is illustrated beautifully here: Sonic Mars Remake contains absolutely no changes in elevation whatsoever. You spend the duration of the game jumping between flat, square islands, and thanks to a fixed camera, sometimes you can’t even see what you’re jumping to. This is the most use I’ve ever seen anyone get out of the Mode 7 object, but unfortunately, it’s still not enough. 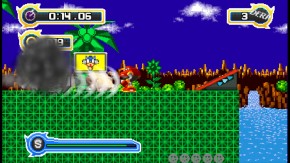 I’m sure this was hilarious at the time.

Da Rock
Allow me to fulfill the role of “stick in the mud”: Da Rock appears to be a (fairly nice!) engine test for a Game Maker Sonic codebase where Sonic has been replaced with a rock sprite from Sonic Advance, and the invincibility power-up is the “Smoke Weed Every Day” meme. That’s… it. That’s the entire “game”. I guess it’s fun to play, but the joke did not particularly make me laugh and the level itself is the same faux-wireframe tiles we’ve been getting in engine tests for years. There’s a second playable “character”, the flower from Green Hill Zone, but as far as I can tell it’s identical to the rock but missing a couple of moves (like the homing attack), which actually seemed to make the level impossible to complete. Maybe this was an entry for RAGE mistakenly listed at SAGE? It is a mystery to me. But at least this proves that the Sonic Reboot guy should look in to pre-made engines for Game Maker, I guess.

And so ends today’s batch of SAGE reviews. Come back tomorrow for more!

* Disclaimer: Your life does not actually depend on it.

Shenmue Hinted at for SEGA Heroes