Chrono Adventure is quite the Xperience.

Today’s wrapping up my last day at the helm for SAGE reviews. From here on out, it’s all on Louis, who last I heard, seemed to be studying for his Masters. So cut him some slack, okay? 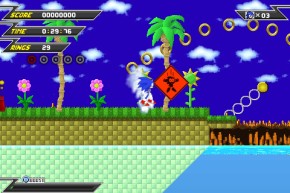 The world’s tiniest swinging platforms, or a larger than life hedgehog? You decide!

Modern Sonic Dash+
This seems to be a growing trend in Game Maker this year; here’s yet another game that seems to be using the same shared code base as many others (and if they aren’t the same, then they are very similar). Presumably, Modern Sonic Dash+ modifies the Sonic Dash engine, adding five playable characters (Sonic, Tails, Knuckles, Shadow and Sonic.exe) and all of the Sonic Unleashed/Generations era fixings. Boost, homing attack, light dash, stomps and QTE ramps are all present, but are all seemingly jammed in to a frustratingly tiny space. The test level appears to have been designed for Classic Sonic, which makes stumbling around as a big huge pre-rendered Sonic sprite feel cramped indeed. If you dare to boost at all, there’s a significant chance you’ll instantly sail down a bottomless pit. Of course, if you don’t like the test level, Modern Sonic Dash+ comes with a surprisingly usable built-in level editor. Of course, the level editor itself comes with zero instructions on how to use it, a very limited number of level tiles, and is still missing some pretty important features (like how to reset your character should they fall off the level), but once I figured out how it worked, I was moderately impressed. With some more content for the editor and normal (or at least smaller) player sprites, this could end up something really special. Oh, and gamepad support, too. I mean, c’mon, it’s 2014! 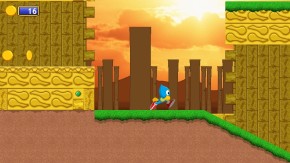 Kind of a weirdly nostalgic game to me, but for the wrong reasons.

Bingo the Multiva
So, I mean, I invented SAGE, right? And there was something everybody learned almost ten years ago: never package your SAGE demoes in installers. Installers leave a lot of junk lying around your system, even after you delete the game in question. Even retail PC games don’t often use traditional installers anymore; programs like Steam or Origin handle all of that stuff for them. And, unless you’re registering DLL files or video codecs, a simple zip file will do the trick just fine. And yet, here we are. The rest of Bingo the Multiva is similarly caught out of time; the game features what appears to be some kind of Chao-like creature in a completely average platformer. On some level I guess the creator should be commended for their original graphics; it sort of reminds me of Strife’s early work before he went on to do Freedom Planet. But there’s also absolutely nothing special about this game whatsoever. A lot of the jumps the game expects you to make are extremely difficult, and I often got stuck in the ceiling of certain platforms. Levels are laid out like Sonic levels, and you can even spindash, but there’s no formal Sonic physics system and the game in general is rather slow. I don’t want to say that it’s bad, but it definitely needs a lot more of just about everything to stand out from the crowd. 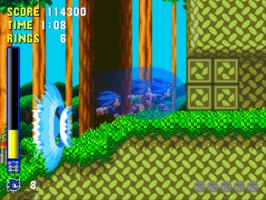 Sonic: Black Ace
I was ready to write this off as just another engine test, but once you get past the three acts of featureless faux-wireframe tiles, you’re given a chance to run around some actual, real stages. Though Black Ace gives you a choice of multiple characters, each with their own unique start and end points, many levels seem explicitly designed primarily for the abilities of Modern Sonic. This is kind of a problem, at least to me, because Modern Sonic is fast. And I mean, like, really fast. I love the Sonic Unleashed boost-heavy play style, but Modern Sonic here might actually be TOO fast. It doesn’t help that Black Ace seems dedicated to replicating the Genesis’ 4:3 resolution, meaning you’re moving so fast you can’t really see what’s ahead of you. The game accommodates for this, but what that really means is that you spend what feels like minutes at a time just… watching Sonic run forward, relatively unopposed. Up walls, around loops, across extended ceiling sections, just running and running and running. When you aren’t running, you’re bopping across homing attack chains (which are nearly impossible to manage as a character like Classic Sonic), or, in keeping with the theme of a lot of these Game Maker Sonic games, doing Sonic-Unleashed-style QTE sequences on your keyboard. I never thought I’d say this, but I think I’d enjoy this a lot more if Sonic just slowed down a little. Sonic Unleashed was fun because of its ranking system and the level of execution required just to make it to the end of a stage without dying. This is mostly just watching the game play itself, and fumbling around when its not. 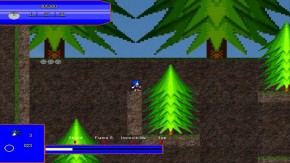 Sonic Xperience
In its SAGE booth, the Sonic Xperience boasts a “brand new ability system, parkour, multiple characters, more than twenty playable stages” and “new characters”. The demo available at SAGE features one character and one stage, and as you can tell by the screenshot, boy oh boy is it a doozy. To its credit, Sonic Xperience does feature something of a “parkour” system, but all it really means is that when you jump in to a wall, Sonic will attach to the surface and run up it. It’s not really parkour, it’s just a function of regular Sonic physics tweaked to work a certain way. But, it’s simple, effective and more importantly, it works, though there’s a particular segment in the demo where it can be a little tough to get a handle on jumping from wall to wall. If only the rest of the game was as elegant as its parkour implementation: the visuals alone are remarkably gross; realistic Photoshop textures clash with giant stretched Sega Genesis sprites that weren’t ripped properly, all arranged in to a bunch of big, boxy, empty environments. And that HUD! That big, ugly, over-sized, blue blob of a HUD, with a huge meter that’s never explained and apparently never used. Maybe if the visuals were better this all wouldn’t be so bad, but right now… sorry, no thanks. 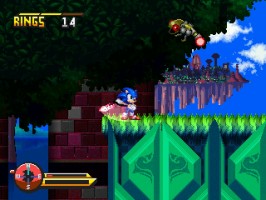 Knight of the Wind ♪

Sonic Chrono Adventure
Obviously I’ve saved the best for last. Sonic Chrono Adventure‘s been out for a while now, but I haven’t gotten around to playing it until just now. You’d think I would, however; many years ago I was best known for my own Sonic fangame, named Sonic: The Fated Hour. Over the course of almost 10 years, I worked on and off on multiple different versions of that game. The short of it was that TFH was intended to be a Metroid-style Sonic game, but I eventually found the two concepts to be incompatible. As such, I’m very interested in Chrono Adventure, which sets out to try its hand at the very same concept. If anyone can actually finish an insane project like this, it would be LakeFepard, who continually put the rest of the Sonic fangame community to shame by putting out three complete Sonic fangames in as many years. So, how does it fare? Well… obviously, Chrono Adventure is going to be a long game, so it’s kind of unfair to judge it based on the hour or so I put in to it. But a number of things do jump out at me as confusing elements: particularly with how the game handles its world map and how you travel between locations. In a game like Castlevania or Metroid, you usually have a map represented by a collection of squares signifying where you’ve been. Chrono Adventure tries to represent its map in “3D”, and it accomplishes this by trying to attach a cardinal direction to areas. Depending on where you exit a given area, you’ll rotate to face “East”, or “North”, and enter the next area presumably facing that direction. It’s a weird idea, and became immediately confusing about the time the game actually gave me a specific location in the game world I needed to travel to. The story also could use some work; at least early on, there are certain cutscene events where it’s not entirely clear what is happening, and not in the “interesting mystery” way. (Sometimes it’s more like “what am I even looking at”). And then there’s the more traditional Adventure game trappings, like talking to NPCs, buying items, and managing an inventory, most of which don’t feel especially intuitive here. I’m also not entirely sold on the concept of giving Sonic a melee weapon, though it does provide an easy way to give the player new abilities and encourage exploration. I will hand it to LakeFepard, too: by fangame standards, Chrono Adventure is downright gorgeous, and at least as far as the first few areas are concerned, seems to have some very solid level design. If only I had a better idea where I was going at any given moment.

And so wraps up my portion of the SAGE reviews. It feels kind of weird to be done so early! I’m not sure what to do with myself, except… play all the games I didn’t review, I guess! Catch you guys next time… and stay tuned for Louis’ reviews!