Going On A Salom Adventure

At long last, it’s my turn to take a look at some SAGE games! I don’t usually do our SAGE reviews, so this is something of an experimental experience for me, and I hope you get at least some of the information and opinion you’re looking for through these bite-sized reviews. I have a bunch of games on the docket and they’ve given me a lot to talk about, so let’s get going! Sonic 1 Sigma really doesn’t add much to the original game.

Sonic 1 Sigma
I love the original Sonic the Hedgehog. I really do. That said, if you want to create a successful hack of the game, you need to bring something new to the table: new environments, intriguing level design, even new characters or gameplay mechanics. Sonic 1 Sigma doesn’t seem to be at that point yet; it’s a fairly basic hack of the original game that you can play with your Genesis emulator. Its short two-level demo consists of extended versions of Green Hill and Labyrinth Zone with minimal graphical changes, and it’s pretty obvious where the original level ends and the new content begins. Not all of the new level design is up to par; there’s a lot of spike pits and strange enemy placements that hurt the flow of the game, and some of the “new” design is yanked straight from the original game with minimal changes. Its SAGE booth promises that more features and elaborate tweaks will come in the future, but until that content is finalized, you’re not missing much if you stick to the original game. 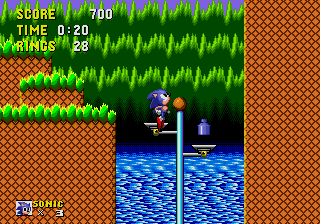 Bridge Zone is recreated perfectly, auto-scrolling and all.

Sonic GG/MS Remake
This one intrigued me. Sonic GG/MS Remake is exactly as its name implies; it imagines what the original 8-bit Sonic the Hedgehog would look and feel like in a 16-bit environment. Built on the Sonic Dash engine, the game’s demo includes Green Hill and Bridge Zone, and it recreates their unique 8-bit level design perfectly; it’s a very accurate representation of that game, and the transplanting of those simple levels into the familiar 16-bit style makes plain how limited those old consoles and games were. Bonus features and options are plentiful, and I had to play through the short demo multiple times to fully appreciate how customizable the experience is. The controls are a bit slippery, which makes precise platforming a bit difficult, but not to the point of it becoming a deal-breaker. Surprisingly, I encountered a substantial amount of framerate issues; I’m not sure whether to blame it on the age of my PC or not because the other games I’ve played so far ran quite smoothly. Issues aside, there’s still a certain degree of old-school charm with this one, although I may be a bit biased since I really like that old 8-bit game. 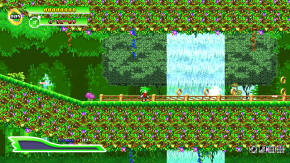 It looks good in motion, but the screen can get a bit cluttered and most objects are really small.

Salom Adventure
I wasn’t sure what to think of Salom Adventure at first. It’s a fairly ambitious concept; taking both new and existing characters and giving them mechanics that try to get modern and classic sensibilities to play nicely. The end result feels a bit like Sonic Rush in that it encourages you to burst through the level as fast as possible, and when you get a decent flow going, the game actually looks and feels really good. The characters feel very weighty, though, so it’s very hard to come to a stop once you get going..that is, if you don’t run into an enemy or fall off the map. The game does warn you of upcoming obstacles, but most objects on screen are really small, so it’s not hard to smack into something anyway. The game further spices things up with Sonic Unleashed-esque mid-air QTE’s and a more flexible version of Sonic 4‘s homing attack, the latter of which works quite well. Even though the core mechanics and visuals could use a bit more work, the game is complex and polished enough for it to me my favorite of the five I’ve reviewed here. 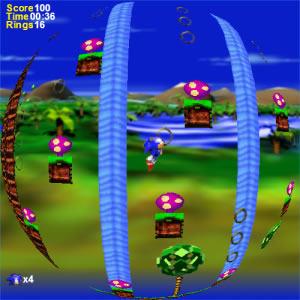 If I had to describe it in one word, I’d call it unfinished. That, or bad.

Sonic X-Treme 2D
Here’s a prime example of a neat idea that suffers from bad execution. Sonic X-Treme 2D imagines what the infamous cancelled game would be like on a strictly two-dimensional plane. The fish-eye view is there, but that’s about where the compliments end. The rest of the game looks and feels confusing. The controls are loose, the HUD presentation is sloppy, and the level design is awkward. I kept jumping and falling to my doom until I realized the level just stops. No warning sign, no invisible wall, nothing. Also, the screen flashes in inverted colors after you get hit, and that gets frustrating very quickly. Much like the leaked betas of the real Sonic X-treme, this one feels like an unfinished engine test and very little more. 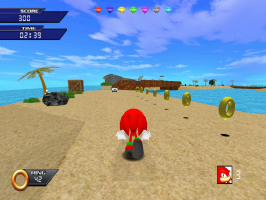 Sonic the Hedgehog 3D
I’ll wrap up this Review Slew with a 3D game. I’ll admit that I haven’t played many 3D Sonic fan games, but Sonic the Hedgehog 3D looks and plays as I would expect one to. Running on the Build Engine and EDuke32, this game has you moving forward and using the mouse to turn. Some people like this control scheme, but I was never a fan of it. Thankfully, the game has a host of customization options so you can adjust the controls to your liking. Once you get going, you’ll find that it’s a fairly straightforward 3D game. Graphics aren’t very detailed, but the textures look good, even at lower resolutions. Control is a bit imprecise, but the wide and forgiving (albeit occasionally confusing) level design offsets this somewhat. With eight levels and multiple playable characters, there’s enough content here to keep those who are interested engaged for a decent period of time. It’s nothing groundbreaking, but I’ve certainly seen worse and less ambitious efforts.

That’ll do it for my first batch of SAGE reviews. The expo may be ending soon, but I’m just getting started, so stay tuned throughout today and tomorrow for the rest of my reviews.

Sonic in the Mix for Black Friday Deals