Jamming on the Edge of Darkness

There’s plenty more games to talk about. Let’s get right into it. 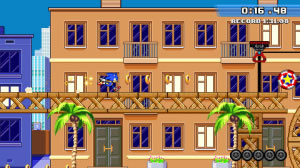 Sonic Game Land
Sonic Game Land made an appearance at last year’s SAGE, and it’s come a long way since then. This game focuses on racing, and you’ll see that theme pop up throughout the demo. Time Attack has you running laps through any of three different courses as fast as you can, and the multiplayer mode lets you challenge friends to races in a mode that’s reminiscent of Sonic 3‘s multiplayer. Unfortunately, the same control problems from years past continue to plague this game; it feels very loose, and any degree of precise control is relatively tough to achieve, even with practice. That said, the game’s original art assets and overall presentation look pretty good, despite the fact that the majority of the assets are mixed and matched from official games. The music’s pretty catchy as well, but solid presentation can’t distract a player from flawed mechanics and grammatical mistakes forever. 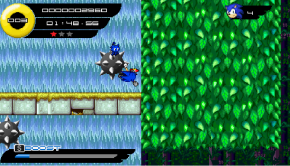 Since you can run on walls indefinitely, I got stuck here. So much for that run.

Sonic Legends
Here’s another case of slippery controls undermining a game’s potential. Sonic Legends is another 2D platformer with a custom engine. After dumping you into a hub world with no explanation or menu system, you’re invited to explore its main levels, and it was here that I discovered how awkward its mechanics can be. Sonic accelerates very quickly, and it’s even harder to bring him to a stop here than in Game Land. Boosting and using the Homing Attack can help redirect you if you shoot off in the wrong direction, but it’s nonetheless pretty damn tough to control. On top of that, most of the graphics are ripped straight from other Sonic games, so there’s isn’t much interesting variation in the visuals. All things considered, Sonic Legends is playable, but I didn’t really want to keep playing it. 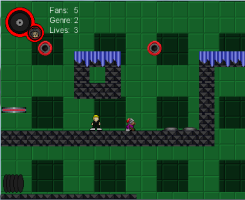 Another misuse of Game Maker rears its ugly head.

Jam
I’m not sure what to make of this. At best, it’s an incredibly basic 2D platformer that’s only tangentially related to Sonic. At worst, it’s a shoddy and confusing test of Game Maker. The controls are almost too simple, with running, jumping, and a strange hover jump among your only options for movement. The graphics are very basic, with some sprites lacking such basic properties as background transparency. In some cases, the graphics even lack basic functionality; the player character doesn’t have consistent falling animations, for example. This might have been a glitch on my PC specifically, but the game also had no music whatsoever, and that’s inexcusable for a game that’s ostensibly based around rhythm. Its SAGE booth details a deep story and complex set of gameplay mechanics, and it’s a pity that none of this is properly realized. It’s clear that the person or people responsible for Jam want it to be an awesome rhythm-based platforming game, but at this point, harsh as it may sound, I’d hesitate to even call it a game. 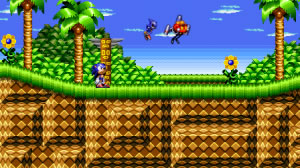 The graphics look great and the controls are solid. This one’s a winner.

Sonic: Edge of Darkness
Here’s one I’ve been waiting for. Sonic: Edge of Darkness is a very solid 2D platformer that served as a nice change of pace from the previous three games. Unlike many of the slippery, borderline out-of-control games I’ve seen thus far, Edge of Darkness presents a much more precise and rigid control scene. It’s perhaps almost too rigid; Sonic takes a very long time to accelerate, and he isn’t incredibly fast once he gets going. That said, the game is still fast enough to stay interesting, and I was able to comfortably see where I was going and what obstacles are ahead of me, two very important factors in whether or not I’ll enjoy a Sonic game. This measured sense of speed makes the transitions to platforming segments smoother, and the game finds a nice sense of flow as a result. The graphics are bright, stylized, and consistent; it reminds me of Sonic CD, in a way.Despite the demo only containing two levels, I had a lot of fun with this one, and I’m looking forward to longer and more developed versions of it in the future.

I’ve got one more set of reviews to go before we’ve covered everything at SAGE this year. Stay tuned for that later today.

TSSZ Readers Declare Sonic Before the Sequel Best of SAGE 2011