Looking at the Last Batch of Fan Games

We’ve got one more set of reviews for you, and I’m happy to say that most of the games in this Slew are among the best at SAGE. Read on to find out why! 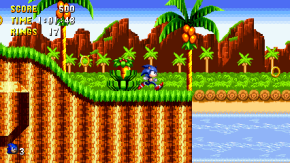 Project Eclipse
This one’s pretty straightforward: it’s a simple 2D platformer closely modeled after the classic Genesis games. While it doesn’t bring anything significantly new to the table, it completely nails its core gameplay and presentation. The controls are very tight, the level design is fun, the music is decent, and the graphics are bright and colorful. The only real disappointment here is that the demo is very short with only one level present; you can completely finish the demo in 90 seconds or less. That said, when my biggest complaint about a game is that I wish I had more of it, I’d call that game a success. 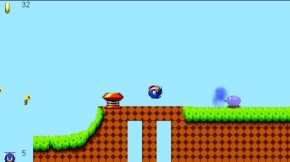 This is either an earnest first effort or a desperately slapped-together monstrosity.

Sonic Core
There’s a big difference between “amateur” and “amateurish” work – the former simply implies that something was created by someone who isn’t a professional in that field, whereas the latter implies that the work is lacking in skill or genuine craftsmanship; Sonic Core is an example of the latter. Featuring choppy graphics, nonsensical level design, baffling physics, and a presentation style that screams Microsoft Paint, this game is either someone’s understandably rough first effort or a lazy “demo” hacked together as fast as possible. I don’t mean to sound too harsh or overly brash, but this game is deficient in so many areas that it would need a hell of a lot of work before I would take another look at it. Quick note: if I can kill myself by simply walking off-screen directly to the left of where I start, you’re doing something wrong. 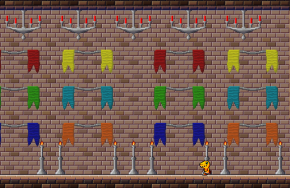 The game looks good, and it’s among the most polished SAGE games I’ve played.

Digimon: Heroic Battle Spirit
Yes, there’s non-Sonic games at SAGE, and this one really surprised me. Admittedly, I know very little about Digimon as I haven’t really touched the series since the late 90’s, but even I can appreciate this one – and it gets points for having a Mac OS X executable so I can play it on my main computers. The game is modeled after the Digimon Battle Spirit games on the Game Boy Advance, and it’s heavy on exploration and tactical combat. You can play as multiple characters, each with different abilities, and the game has its own unique narrative with dialogue playing out in text bubbles that follow you around. It’s quite creative, and it’s mechanics work very well aside from a rather sluggish movement speed. It’s actually one of the better overall games at SAGE, so don’t pass it up just because you’re running around as Agumon at first. 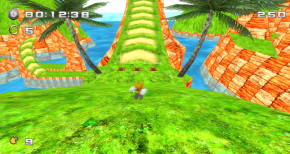 Sonic World
The final game in our Review Slew series is an ambitious one – a fully-3D platformer very much styled after the Sonic Adventure games. It runs on the BlitzSonic engine, but it features a fairly tight implementation of it with relatively good-looking graphics and a more agreeable control scheme than I was expecting. It’s far from perfect, mind you; precision platforming is something of a chore and it’s very easy to careen off of ledges into oblivion, but it’s certainly not the worst experience in the world. I found the default control scheme to be absolutely miserable, but the game does let you customize every single function to your liking; I just wish the interface for that was less cumbersome. Once you get your controls figured out, you can choose from a shockingly wide variety of characters, each with their own distinct ability and style of play. The three levels in the demo are huge, reasonably full of detail, and begging to be explored; flying around them with Tails was actually really fun. If you like the 3D fan games, don’t miss this one.

That’s it for our Review Slews, and that should more or less wrap up our coverage of 2014’s Sonic Amateur Games Expo. Stay tuned for any additional coverage of the event, and as always, keep it here for all your Sonic and Sega news.