So, I mean, let’s get one thing straight right here, right now: This “Legend of Zelda Zone” DLC for Sonic Lost World is free. It doesn’t cost you anything. Theoretically, reviewing it at all is sort of a moot point, and you’ll note the Yoshi’s Island Zone DLC came and went without so much as a peep from me. When something doesn’t cost anything, you aren’t really losing much except the time it takes you to experience it. And, man, with The Legend of Zelda Zone, that ain’t much.

The trailer that Sega put out was rather deceptive. It gives the impression of the big, open environment of The Legend of Zelda‘s Hyrule Field, very, very well. Almost too well. Long have I dreamed of a Sonic game that is more than a series of linear walkways and opens up in to more of a free roaming experience. Initially, that’s what The Legend of Zelda Zone seeks to give you, but all too quickly you find yourself walled in by fences and immense bottomless pits. In retrospect it makes sense; the scale of this project would have never allowed for an environment so massive, but it would have been nice. 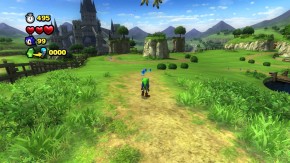 Oh, what could have been…

Perhaps that’s my own fault. If you’ve read this site for any length of time, you know about the Unreal-engine-powered SonicGDK. What you might not know of is Twilight Legends, a proposed fan-made sequel to The Legend of Zelda: Twilight Princess. Twilight Legends is also being made in UDK, and speaking as somebody who spent a lot of time exploring (usually empty) BlitzSonic environments, I occasionally wondered what it would be like if SonicGDK borrowed Twilight Legends’ Hyrule Field map. It was all but guaranteed I would be let down by the absolutely tiny area afforded to you in Lost World‘s Zelda DLC.

It does not help that once you leave the open air of Hyrule Field, Lost World‘s The Legend of Zelda Zone turns in to a very short, very straight-forward tunnel level. As demonstrated by the video above, it’s pretty much a straight shot to the goal. I railed against the game for being too linear in my video review, and the “Dodongo’s Cavern” portion of this DLC does nothing to assuage those complaints.

Of course, a rather successful argument could be made in favor of the fact that this level was never meant to be played straight. It’s 99% fanservice, and to that end, it fulfills its role very well. Sonic can be chased by angry cuccos, and those of you keen enough to bring a Bomb wisp in to the level with you will discover the Gossip Stones react accordingly to explosions. A lot of love and care went in to this DLC, and because of that, complaining about how it fell short of some pie-in-the-sky goal seems a bit… petty. Even if it fell short of expectations, it was still cool to experience.

But dang, man. I really want to jump the fence and go exploring, you know?