I’m not a fan of Sonic Dash or free-to-play (an opinion that I elaborate on in this Vertical Slice article) however I recognise and appreciate the work that Hardlight put into creating a well presented and functional Sonic-themed endless runner. As such, I can only appreciate the even greater level of workmanship that has gone into Crazy Taxi: City Rush, even though the pre-release demo I played at EGX Rezzed was, at a gameplay level, extremely unsatisfying. 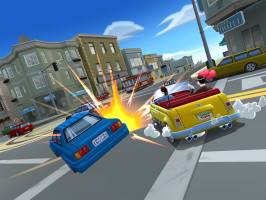 Hardlight have tweaked the punk-rock stylings of the original Crazy Taxi in favour of a softer, more cartoon-ish look and although the bright colours of the original remain, there’s something far less aggressive about Crazy Taxi: City Rush‘s presentation.

In many ways the series’ transformation is analogous to short lived post-punk revival of the early 21st century, during which many commercially viable bands appeared, carrying an image and sound reminiscent of punk-rock, but lacking the passion. Speaking of which, the iconic “stick-it-to-the-man” tunes from The Offspring and Bad Religion have been replaced with uninspired Rise Against and Paramore knock-offs.

Crazy Taxi: City Rush‘s gameplay is equally tame in comparison to its console and arcade predecessors. The taxi runs on a track, accelerating and turning corners on its own, with the only input from players being a swipe left or right to change lane, or a tap on the screen’s corner to unleash a special ability e.g. a boost. I specifically recall the game’s brief tutorial which states something along the lines of “Don’t worry, the taxi knows which way to go”, which immediately conjured images of Major Tom floating in his tin can, in awe of his surroundings but completely unable to exercise control over them. 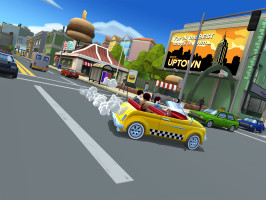 From there it’s a simple matter of dodging obstacles, getting bonus tips and making it to the goal within the allotted time, at which point a new passenger will be picked up and the cycle starts again. While games devoid of challenge or the requirement of skill certainly aren’t my cup of tea, I feel it’s worth noting that Crazy Taxi: City Rush‘s performance on the iPad I was playing it on was impressively smooth, fast and responsive.

For those who have already seen the large volumes of Crazy Taxi: City Rush gameplay footage on the internet, all I can say is that what you see really is what you get. Hardlight have attempted to squeeze some fun from the gameplay described above by providing a range of missions to play through – none of which are particularly inspired. You choose a mission, you choose a driver, you score an arbitrary amount of points, you gain an arbitrary amount of experience, you realise you don’t have enough experience to purchase that score multiplier you’ve always wanted, you reach for your wallet…

But, as was the case with Sonic Dash, those who are willing to dive into Crazy Taxi: City Rush will find a well presented and functional Crazy Taxi themed, endless-runner. It’s fun, it’s dumb and it’s worryingly addictive, it’s just not the Crazy Taxi game some may be hoping for.

Crazy Taxi: City Rush will be made available for iOS and Android users sometime this year.

New Details: Behind the Ahkihabara Killer