The Unauthorized History of Sonic the Hedgehog

Books about the Sonic series are few and far between, and legitimate fan publications are rarer still. You could imagine my surprise, then, when Speedrun: The Unauthorized History of Sonic the Hedgehog came to my attention. Written by British author Julian Hazeldine, Speedrun is a comprehensive look at the Sonic series as a whole, spanning its entire 23-year history. The book reveals its aims as early as the back cover; it seeks to be “the definitive guide to gaming’s fastest hero.” That’s a pretty lofty goal. Does Speedrun hit the mark, or does it miss by a mile? 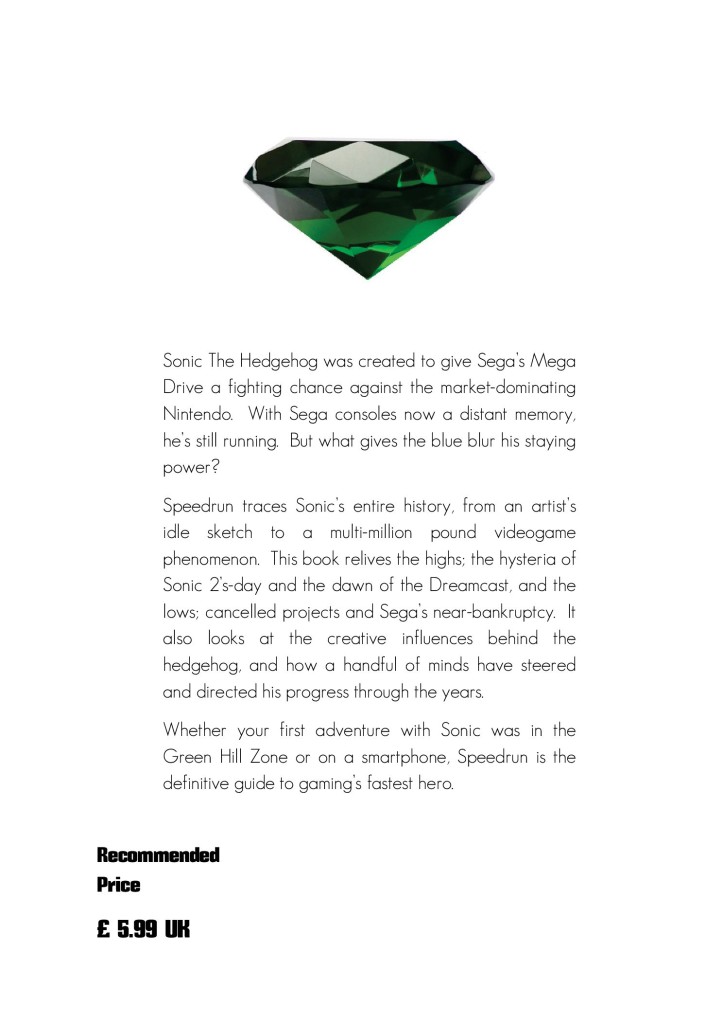 Speedrun makes its ambitions clear right on the back cover.

Succinctly analyzing the entirety of the Sonic series is a daunting task, and Hazeldine steps up to the plate admirably. He divides Speedrun into several distinct sections that each cover a chunk of the hedgehog’s history: the success of the Genesis years, the struggles of the Saturn era, the Dreamcast and the downfall of Sega’s hardware ambitions, the highs and lows of the last console generation, and the franchise’s present and future. Each section thoroughly examines the games, TV shows, books, and other media that were released in that time period, and Hazeldine goes to great lengths to leave no stone unturned; he does a very good job of giving readers a context-sensitive look at how the franchise has evolved. His information is thorough without becoming overwhelming, and this helps keep the book approachable to even the least knowledgable of fans.

At first glance, then, Speedrun may appear to be pretty dry, a purely objective take on Sonic’s history. However, even a brief examination will reveal that the exact opposite is true. Peppered throughout the book are Hazeldine’s opinions on the Sonic media that he is familiar with, and he expresses his thoughts rather forcefully in some sections. He justifies this in the introduction by claiming that, as an unofficial publication, the book is free to inject more criticism and opinion as it all comes from a fan’s perspective; I’ll leave it to you to determine the appropriateness of this approach. My only real issue with this arises in the rare instance when Hazeldine’s commentary may mix with history a little too homogeneously; fact can blend with opinion to the point where the casual fan may have trouble determining which is which.

Depending on your view, these problems are either mitigated or exacerbated by Hazeldine’s writing style. His prose is elegant and almost conversational in nature, which makes the book quite enjoyable to read. The writing becomes overly informal at times, with constructs like stray punctuation marks in parenthesis (!?!?) infrequently denoting additional emotion where Hazeldine deems it necessary. The result is a book that has genuine personality, reading less like a college lecture and more like an enthusiastic retelling of a fan’s wealth of knowledge; this makes sense, of course, because that’s more or less exactly what Speedrun is. Its accessibility means that you’ll likely stay engaged throughout, and since the book checks out after 142 pages, a single marathon session is all you’ll need to finish it off.

Ultimately, how much you enjoy the book will be determined by how much you’re willing to accept subjectivity and either consider or ignore the author’s opinions. I agreed and passionately disagreed with Hazeldine in equal measure, but I still enjoyed the book and the wealth of information it contains. If you’re a hardcore Sonic fan who knows the franchise inside and out, or you’re vehemently put off by commentary, his work probably won’t hold your attention for long. That said, its comprehensive and accessible approach to Sonic’s history makes Speedrun worth a look for readers who appreciate the franchise and want to explore it through the eyes of a fellow fan. At just one dollar for a digital copy, you really can’t go wrong.

Chronicles Leak: What Happened to Dexter?