“The best Sci-Fi/Horror experience I have EVER played”

There isn’t really a good place to start with this experience other than straight from the back of the line. The line for this game wasn’t that bad, but we were warned that at a certain part of the line it was an hour wait just to play a three minute version of the game that was at E3. What they also managed to tell us was that this particular version of the Alien Isolation Experience (We’ll just name this A.I.E. for short) did not have the Oculus VR with it.
Why would they pull that from this particular experience compared to version at E3? Well apparently we were told that people would use the Oculus VR at E3, and because they were never used to the immersion that it brought to them in the game they would throw the Oculus off their head and get out. Score one for SEGA in the “Horror” genre!
They also told us that around 3,000-5,000 people played at E3 only 5 had completed the 3 minute demo. Here at San Diego Comic Con, no one had completed it, much less even come close to completing it. A big challenge in and of itself, and I figured I might as well give it a shot. 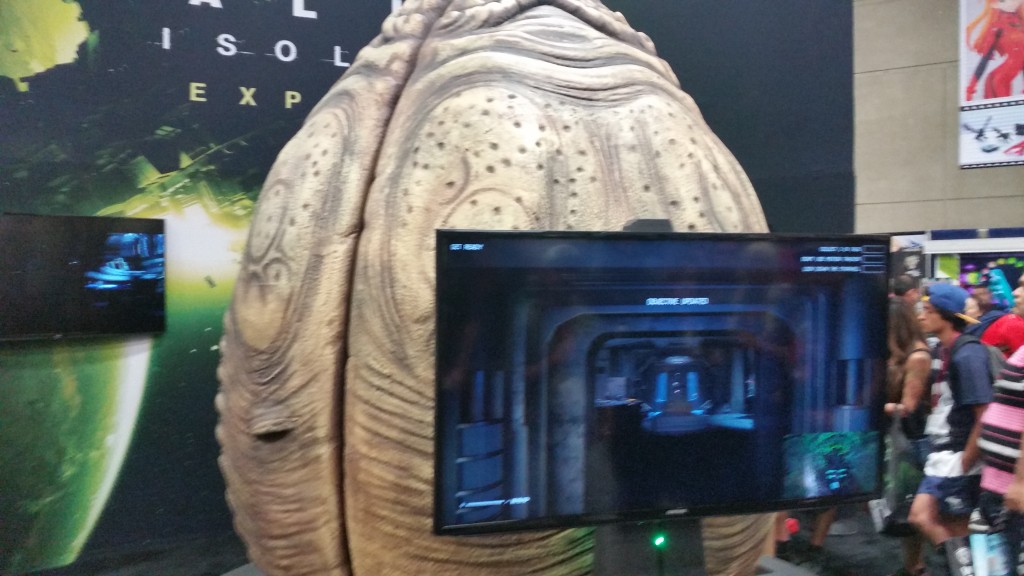 It’s essentially a big wall with “Alien Isolation Experience” written on a background still from the trailer we all got to see so long ago. Under that were three TV’s that played the same thing at 3-5 minute intervals, but the info wasn’t too bad. Sigourney Weaver, and a few others got to talk about their experience with it, and what they wanted this to be, etc. etc.
There was another section behind the booth, even though it was small, where an artist of the Alien Isolation comic we received in our hand Alien Isolation bag would sign said comic later. Not too bad, at least we get something for trying the game out and we can get it signed.

On the front of this massive Alien egg there was a TV screen situation that was connected to the console inside of it so people could see how well you were doing. Which provided for some amazing hilarity, but others were equally impressed by how well players did.

Inside this massive Alien egg was probably the biggest size TV they could fit coupled with a aming chair with built in speakers. Now I know what you’re thinking, “Most times those speakers suck! You think you hear one thing and sometimes it’s another.” Well… you would be incorrect. Because it was in an enclosed space you heard EVERYTHING. More to that as we move along here.
The console they used was none other than a PS4, which I a not well versed in Playstation controllers after PS2, but I’ll make do with what I was given. Along with said controller was a card telling whoever played what the controls were. Had that little piece of information not been in there, or given to us before we even stepped in the experience would’ve been confusing to say the least.

They started you out with the knowledge of two things before you even enter the Alien egg:
#1 Grab the Flamethrower in the first room!
#2 USE YOUR MOTION TRACKER!
No that was not cruise control caps lock, that was emphasis on just how important that Motion Tracker is. We’ll get to that here in a second.

Knowing those two things really helps you in this demo, because they start you off in the same demo at E3, and for most of us that’s already great information on what to do. So the demo as it starts:
They bring up a small little tutorial on the Motion Tracker, and how it works in locating objectives (since there is no on screen hud) and how it locates Aliens. That alone should have given every player an edge, but let’s face it there were so many who just didn’t listen to the staff or the demo when they said, “USE YOUR MOTION TRACKER!”

After the small demo of the tracker you’re placed in a room where the first thing you can see is crafting material in front of you, and of course on the wall off to your left is, TA-DA, the Flamethrower! #1 Grab the Flamthrower… check! Will I use it? Don’t know yet, just get me out of this room.

What’s this though in the top right hand corner of my screen? Challenges? Indeed! Three challenges were present in the 3 minute demo, and rightly so. Collecting 2 ID Tags, not using your Motion Tracker, and locking down a corridor/stairwell (can’t really remember the last one) gave you time, or took away time.

Going through the first door starts a timer, 3 minutes start! If you’re thinking, well I can just stay in this room, the door opens anyway, and the timer starts. Nice try to some who actually thought that would work.

What was that second thing they told me? #2 USE YOUR MOTION TRACKER! Well, let’s see I can hear the Alien already off to my left, and my Flamethrower out so I run in and just as I turn and pull the trigger he tackles me. Time to go start back in that room again. This time when I open the door I IMMEDIATELY take out my motion tracker, but really didn’t need it since you know… he was right there around the corner! I duck stone and like a stone cold statue just sit there and wait. With that Motion Tracker up I see he’s left the area, “Ok, Where’d he go? Did he go into the ventilation? Is he just not moving? Screw it.”

I proceed down the hallway at a brisk pace, and the Motion Tracker lights up again. This time… he’s behind me! I run to the nearest box, and break line of sight. Luckily he had JUST come around the corner and ran right past me. What does the tracker say? He’s gone again. It’s like he’s toying with me.

Moving up a small set of stairs, and around a corridor or two I find that people are clapping outside, but at this point I have no idea what for. I pull my Motion Tracker up and before you can say anything he drops down from the ceiling not 30 feet in front of me! I duck behind the first box I could to see if maybe this would work a third time.

The Alien is literally right next to me, and like a COMPLETE MORON I turn to see if I can watch him move by. My character moved her foot only slightly and the Alien heard it. I get killed once more, and low and behold my time has just finished up inside the A.I.E. egg.

Why’d they clap though? Was it because they knew I was going to die, or was something funny said? Nope, it was because I was right there and the staff member had told them that. I got another round of applause after I left the egg.

Needless to say trailers do not do this game justice at all! You have to actually play it, even for just three small minutes, to understand it. In my honest opinion as a gamer for the last 23 years, and Sonic Remix can back me up there, this has by far been the best Sci-Fi/Horror experience I have EVER played!