Videogames! On the internet! Exclamation points!

It’s SAGE 2014 Act 2, everyone! Sorry this is so late – with the solid month it took me to get that Mario Kart 8 video review done, it’s been kind of an intense few weeks! But here I am, and here we are, and here are some Sonic fangames! 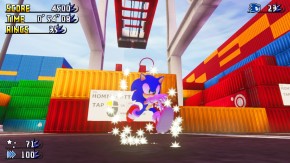 Sonic Lost Adventure: Havok Harbor v1.2
You better believe that this was the first game I made a bee-line for. Havok Harbor was one of my stand-out games in SAGE 2014 Act 1; it utilized the potential of SonicGDK very, very well, to create something that looked and felt almost like an official Modern Sonic game. This release of Havok Harbor, as they say in the business, “tightens up the graphics on level 3”. The level layout itself has not been significantly changed, it’s just received an extra layer of polish. Collision detection with certain objects is a little bit better, visuals are a little bit prettier, and Quickstep sections have been reworked to function more like they did in Sonic Generations. But it’s not all roses: SonicGDK’s slightly floaty physics still pervade, and on more than one occasion, rubbing up against a shipping crate the wrong way caused Sonic to collide with it like a ceiling during an ascent. There’s also the issue of optimization: I don’t exactly have the hottest computer on the block anymore, but if I had to assume, Havok Harbor has some serious geometry culling issues. During 2D segments the game runs rather smooth, with nothing more than a simple background to render. But during behind-the-back segments, especially at the start of the level, the framerate skims the single digits for me, regardless of graphical settings, like it’s rendering distant objects that can’t actually be seen because they’re too far ahead of Sonic. Which is a shame; in the relatively small tutorial map, the game looks downright gorgeous at a full 60fps with everything cranked up – almost as good as (and in some ways maybe even better than) Sonic Generations. But the main level, for a map largely constructed of simple rectangles, runs curiously poor on my machine, even though it can generally run most other Unreal Engine 3 games without so much as batting an eyelash. But when Havok Harbor does eventually smooth out, it really is a sight to behold. Don’t miss it. 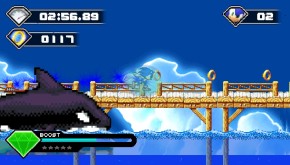 That’s… quite the pixelated whale.

Sonic Adventure Emerald
Okay, let’s get this out of the way right here: It’s 2014! Your fangame should probably have gamepad controls, especially if it’s trying to replicate a game from a system primarily controlled with a gamepad! If you don’t have a gamepad, you should probably get one! Ahem. Anyway. At first glance, Sonic Adventure Emerald is impressive, thanks in part to Sonic Fan Dev Guild’s Modern Sonic engine tech. The menus have a slick level of presentation, the game is fast and easy to play… but it’s the little things that are an issue. For a game with such a skilled visual designer, levels frequently have uneven tiles with one-pixel-wide gaps between them. The first level you play replicates Sonic Adventure’s iconic orca whale chase, but uses orca graphics from Ecco the Dolphin, which aren’t scaled properly with the rest of the game. At one point, I found level tiles I could walk through, as if they were going to lead me to a Sonic-3-style secret room, that instead merely stopped at a dead end, making it seem like just a glitch. Later levels introduce lengthy platforming segments that prove to be a little tricky for the slippery, boost-centric Modern Sonic to tackle. Adventure Emerald is not a bad game by any stretch, but it definitely needs some work to polish things up. 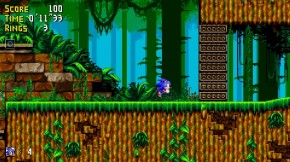 Shame this doesn’t show off how beautiful the parallax looks in motion.

Sonic Mega Drive
You probably remember Felik’s last game, Sonic Fusion, given what a staple of SAGE it had become in its time. Felik had lofty goals for Sonic Fusion, and even though it was still defined as a “demo” even up to its cancellation, it had at least a full game’s worth of content. Felik is now going back to basics with Sonic Mega Drive, and what’s on display here is mighty impressive. Like a lot of retro-themed fangames, Sonic Mega Drive is aiming to play like a lost 16-bit Sonic game, and in this goal, it succeeds very well, borrowing elements from Knuckles Chaotix, Sonic 3, and more. Other fangames have done this kind of stuff, too, but there’s something about the way Sonic Mega Drive implements them that just feels tighter, and better. The game also has plenty of spectacle, as you zip through complex corkscrew patterns and around tree trunks. There’s even a bit of a Metroidvania aspect to it; I was initially bewildered as to whether or not Felik was one of those crazy people who thought Sonic would be better off without the all-important SpinDash, but no, it’s just stashed away in level 2 as an ability upgrade. One would assume that later levels would further ease players in to Sonic’s extended moveset. Keep an eye on this one, folks – it’s going be something special. 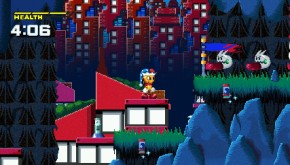 Spark The Electric Jester
Many people simply make fangames as a hobby; something to do between school or work just for the fun of it. But others are looking to build a career in independent game development. Many SAGE superstars have gone on to do it: Taxman started out with Retro Sonic before graduating to remaking Sonic games officially, and more recently, Strife’s Freedom Planet saw release on Steam. And so, here we are, with LakeFepard’s Spark The Electric Jester. Unlike Freedom Planet, Spark is barely recognizable as having roots in Sonic Fangames, outside of some leftover sound effects and visual similarities to LakeFepard’s previous games (Sonic Chrono Adventure especially). The demo on offer here is simultaneously very solid and a little buggy; you can tell it’s still early going. After defeating one of the demo’s bosses, during the score counter I managed to break the game and get the “Level Clear!” text stuck on screen. Still, though, it’s fun enough, though as I’ve said about a lot of Lake’s games, I can’t shake the feeling that there’s something missing, and I’ve never been able to quite put my finger on what, exactly, that is. Maybe I’m just crazy, because what’s here is generally pretty high quality, and even if I’m a weirdo, I’m still looking forward to more of it.

And so wraps up today’s review slew! We’ll have another four games to review tomorrow! Or, er, uh, I guess by now that would be… later today. Hm. Well, see you then.

Watch Sonic cartoons on your Blackberry