There’s no cure for Blue Sphere Madness. Trust me.

I dunno about you, but I’m actually kind of surprised at how high the bar of quality has been at SAGE so far this year. Granted, I haven’t seen everything, and I know Louis’ mentioned hitting some rough stuff yesterday, but what I have personally seen hasn’t actually been what I would consider “bad” – maybe just a little rough, at worst. It’s kind of amazing to think how far things have come since the days when I first created SAGE more than ten years ago. Keep it up! 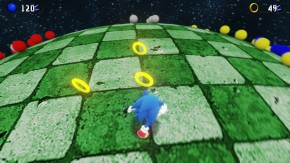 Blue Sphere Madness
There are people out there who are WAY in to Sonic 3‘s blue sphere special stage. It was a kind of nifty puzzle mode, further bolstered by S&K’s ability to generate new blue sphere mazes by locking on to unsupported Sega Genesis cartridges, providing blue sphere fantatics with a nearly endless supply of new levels. Now we have Blue Sphere Madness, a collection of blue sphere mazes created using SonicGDK. I don’t know if there’s really anything more to say than that. Blue Sphere Madness functions exactly as it should, it’s just rendered in Unreal Engine 3, so it looks pretty good, for the most part (though if it were me, I’d replace that stone floor texture with something sharper looking, like polished linoleum). I suppose it’s worth mentioning that these are original mazes; to my knowledge, they haven’t been ported from anything else, and they’re quite difficult to boot. I handled the first one no problem, but about the time I reached the second maze, I quickly became lost and unable to finish it, even after four attempts. Sonic 3‘s mazes had a habit of being kind of symmetrical; almost mathematical, in a sense. In Blue Sphere Madness, mazes seem much more organically constructed, if that makes any sense. The readme file promises a special prize if you can finish the game. It’s worth looking in to. 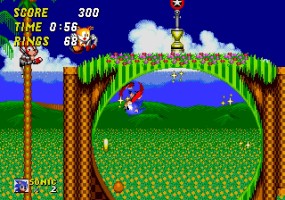 Strap yourself in and feel the G’s

Sonic MAX
Here’s an odd one. Upon trying to open this game, I had Windows yell at me that this was not a valid Win32 application. However, 7zip did pick it up as an archive, so if I had to guess, whatever this was packaged with was created on a 64-bit OS and is thus incompatible with something that’s still 32-bit. On some level that’s on me, because my computer’s just that old, but once I was able to extract the data with 7zip, the actual game itself functions just fine on my system. Sonic MAX is a Sonic the Hedgehog engine created in Game Maker, and comes with a complete remake of Act 1 of Emerald Hill Zone from Sonic the Hedgehog 2. It’s actually a pretty solid recreation, too, though not quite perfect – but the differences between this and the real Sonic 2 are all kind of minor things, so it’s not worth knocking the engine too much for failing to replicate them with 100% accuracy. And, to be fair, the author did say that it’s not quite ready yet, so there’s still room for improvement. Once finishing Emerald Hill Zone Act 1, you are then whisked away to a series of debug levels where you can try out the engine’s more extended features, like Sonic 3‘s elemental shields, and more. It’s kind of neat, though for those of you out there looking for an actual game to play, this might be worth passing over. 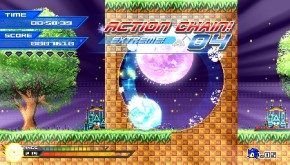 Sonic vs. Darkness: True Nightmare Revived
Have you been bummed out that there hasn’t actually been like, a real actual successor to Sonic Rush? Oh sure, we got Sonic Colors for the DS, which was running on the same engine technology, and Sonic Generations for the 3DS had Modern Sonic segments that were kind of like Sonic Rush, but those weren’t suitable replacements for a real, actual Sonic Rush 3, were they? I don’t think they were. Sonic vs. Darkness fills that gap nicely with what might actually be the most polished, professional feeling fangame I’ve played at SAGE yet. If you’re a fan of the boost-centric Sonic games, you absolutely have to give this a try. There’s only one level available, but it’s fast, fun, and extremely polished (if a little bit on the easy side). Even better, I booted the game up and it gave me a very polite message that my Xbox 360 controller had been auto-detected and the whole game just worked without any setup whatsoever. I do have a couple of complaints, though: For starters, while it detected my Xbox 360 controller just fine, I’m more comfortable using my Playstation Dualshock controller for 2D games, and there doesn’t seem to be any way to remap gamepad buttons as far as I can tell. And secondly, for things like tricks and pushing objects, it’s a little awkward that you have to let go of a direction first and re-press that direction before those things will respond. Those two things are merely minor quirks, so don’t let that stop you from downloading this. Here’s hoping Sonic vs. Darkness gets finished, because I’m impressed. 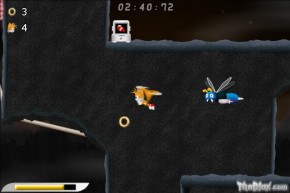 Master flight if you want to survive.

Tails’ Nightmare 3
I seem to recall playing the original Tails’ Nightmare many years ago, and I have to say I’m a little surprised that I apparently missed the second one. I remember the first one being sort of a pleasant surprise; given some of the thematic elements, a game called Tails’ Nightmare could very easily descend in to cheap shock value, but instead, from what I remember, it ended up a fairly enjoyable platformer with a bit of an edge to it. The same goes for TN3. You won’t find hyper speed Sonic gameplay here, just a solid 2D platformer that liberally borrows Sonic elements. It’s also kind of difficult, too – you’d better get a handle on using Tails’ flight to cross gaps, because there are quite a few bottomless pits and lava pools that mean instant death without the proper protection. I ended up getting two game overs at the demo’s boss encounter, which proved a little too dexterous for my keyboard prowess. Like the original, Tails’ Nightmare 3 maintains a mildly creepy atmosphere throughout, but never anything too over the top or crazy… just kind of dark and spooky. It’s pretty interesting. 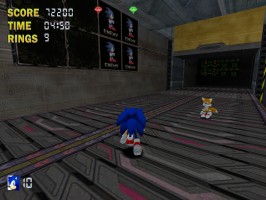 A blast, but not quite a Robo-blast.

Sonic the Hedgehog 3D
I can’t remember; but I feel like it’s been at least a year, maybe two since Sonic the Hedgehog 3D made an appearance at SAGE. And even though it always feels like this game’s just playing second fiddle to Sonic Robo-Blast 2, I still enjoy seeing it just because it’s always so weird. But not weird in a way that’s really bad; just weird in a way that’s interesting. Whereas I feel SRB2 does a pretty good job of hiding its Doom Legacy roots, Sonic 3D wears its Duke Nukem 3D origins on its sleeve. Platforming isn’t especially difficult, but taking care of enemies continues to be strange, as the controls are simultaneously both stiff and kind of slippery. Other weird Duke Nukem 3D-isms surface here and there, like how the game switches in to first person when you have to use Duke Plus’s physics object manipulation mechanics. There’s a bunch of new content in this version of the game: a really nice intro sequence, new levels, new special stages and at least two additional boss encounters. There’s a good hour’s worth of stuff to do here, as long as you can tolerate some of the later levels devolving in to boring quests to trigger (X) number of switches in order to unlock a door leading to the next area. It’s always been rough around the edges, but every time I play it I inexplicably find myself interested in seeing what’s around the next corner. Maybe you will, too.

And that wraps up another day of SAGE reviews. Come back tomorrow for more as things undoubtedly start to wind down.

Project Needlemouse: About that Sonic Cycle…