Today is the final day of TSSZ News’ SAGE 2014: Act 2 reviews. I want to thank you all for reading both Louis’ and my articles. It’s always a good excuse to look in-depth at what’s going on in a community I used to be such an integral part of. Without further delay, let’s get to it! 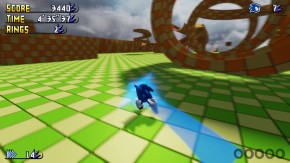 SonicGDK: Packaged Release 9
At this point, there’s not really much left to say about SonicGDK that hasn’t been said in years past. One thing I always found interesting about the old Blitz3D Sonic engine is poking around and seeing the weird levels people were coming up with, and I’d really hoped people would’ve adopted SonicGDK to do the same kinds of strange port jobs and half-original levels. Adoption has been slow, but it’s gradually happening; there are more SonicGDK-powered games this year than ever before, but I think what’s holding people back is the “high” system requirements. I mean, you’d think that after 8 years even a potato could run Unreal Engine 3, but the comments on videos and articles like these suggest that there are a lot of people out there that still aren’t really sure what capabilities their computers have, and thus cannot actually run SonicGDK very well. Which is a shame: though SonicGDK isn’t perfect, it’s far more robust, polished and stable than basically every other 3D Sonic toolset out there, and I keep swearing that one day, I’ll have enough free time to really dig in deep and learn how to make something with it (I have so many ideas swirling around in my head, you have no idea). If you haven’t given this a look, there’s no better time than the present. 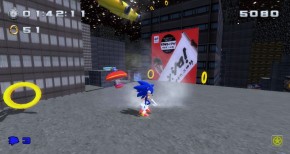 A good effort, but it needs simplified controls.

Sonic World
Now here’s an interesting contrast to SonicGDK: OzCrash’s Sonic World has, over the years, become the most advanced and polished modification of the aforementioned “BlitzSonic” codebase. At this point, it is the closest thing that SonicGDK has to competition. How does it stack up? Well, better in some ways, and worse in others. SonicGDK has a somewhat heavy, weighted feeling to it; whereas in Sonic World, Sonic feels light as a feather. Almost too light, in fact: slippery controls have been a long standing complaint of that original BlitzSonic codebase, and Sonic World only exacerbates that issue, as Sonic slides across surfaces like they’re coated in butter. The problem is further irritated thanks to Sonic World‘s complete and total lack of gamepad controls. Unreal Engine 3 comes built-in with Xbox 360 controller support, something SonicGDK uses to map its controls directly to a gamepad right out of the box. It’s familiar and easy to control. Sonic World, on the other hand, appears to be exclusively designed for a keyboard and mouse. You can use something like Xpadder to use your gamepad with keyboard inputs, but Sonic World actually requires more buttons than my Xbox 360 controller has, and playing the game with a gamepad feels less than ideal. Which brings us to the next problem: if you watch OzCrash play his own game, it’s very clear he created a system of control that he obviously likes and can use very well. He literally flies through these levels, showing an impressive level of mastery. But, um, for those of us just starting out, things feel kind of awkward and spread out. Like I said before: the game actually requires you to press more buttons than most gamepads have. In addition to the usual jump, stomp, spindash, and drift, each character has three unique special moves (each bound to their own button), another separate button dedicated to picking up and holding objects, buttons for moving and centering the camera… and that’s not even touching the Sonic Heroes-style team system, new to this version of the game. I actually died twice in Seaside Hill trying to figure out which one of the 14 buttons I was supposed to push to do Sonic’s light dash. Sure, it looks very fun, but there’s a steep learning curve attached to that. I could actually keep going, but this paragraph’s too long as it is. Needless to say, there’s nothing wrong with Sonic World, it’s just a little weird, especially in light of how SonicGDK plays more like a traditional 3D Sonic game. But if you can’t really run SonicGDK, chances are, the less-complex visuals of Sonic World may be more your speed – just be prepared to do some learning. 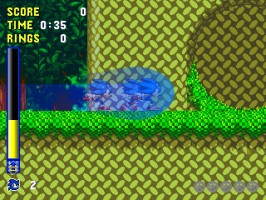 Sonic Black Ace
Ah yes, I remember Sonic Black Ace. This was the game I said not six months ago was “too fast”. You spent the majority of that demo primarily watching Modern Sonic run and not really doing anything else. Has it improved? Yes, actually. Well, kind of. Modern Sonic doesn’t feel quite as out-of-control fast like he used to, but the game still feels primarily relegated to watching the world scroll by at a thousand miles per-hour. There are more moments punctuated by actual gameplay, but not many. Not enough. As with the last demo, you’re given the option of choosing characters besides Modern Sonic, but doing so feels rather futile. After blowing through Mushroom Hill Zone as Modern Sonic, I went back and tried the same level as Classic Sonic, and found it to be largely composed of long stretches of empty land. Modern Sonic tore through them in less than a second, but for slow ol’ Classic Sonic, things were decidedly less action-packed. Then, upon defeating the demo’s brand-new boss encounter, spikes popped out of the floor and killed me, despite the fact the boss was clearly in its death throes. When this happened, the game promptly closed without warning. Presumably I had gotten a game over, but given the GameMaker scripting errors I had seen earlier (“for object objHomingTarget: Error in code at line 10: ^at position 19: Unknown variable targeted“) perhaps the game just crashed. Either way, I decided I’d seen enough. 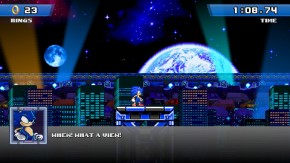 Not a view I’d want to see again if I could help it.

Sonic: Game Land
And here we are. Our final game. Game Land is another returning entry from 2014 Act 1, and similar to a lot of GameMaker-born Sonic games at the show, it has a very slick, professional visual presentation. The problem here is that Game Land might be a little to enamored with its presentation: of the selectable modes, you have Story Mode, Time Trial, and Multiplayer. Story mode is where the issue lies: As you play, Sonic and Tails share dialog about how to play the game and various other elements, but every time a dialog sequence comes up, the game completely stops responding to input. You have to let the dialog play out. There’s no way to speed up what they’re saying, no way to skip it, nothing. You just have to wait until they finish talking. This is especially problematic when Sonic launches off a ramp only to remark, “Whew! What a view!” – in turn, completely interrupting what the player was doing and causing Sonic to stop dead in his tracks. Almost immediately I was begging Tails to just shut up already so I could play the game. You are afforded an option to turn tutorials off if you find them overbearing (and boy, are they), but that still leaves in things like the “What a view!” interruption. In terms of the actual gameplay, Game Land seems to be a fairly standard 2D Sonic game with an included homing attack and grind rails. Sonic himself feels oddly heavy here, as it is surprisingly difficult to get him to come to a stop once he really gets moving. As far as I’m aware, Story Mode contains one level and one boss, and the boss in particular drags on way too long – at least the length of two full boss encounters put together, with the second form being particularly difficult to deal with thanks to wonky platform physics. Should you venture forth to other modes, you’ll find they’ve been given the lion’s share of content, as both Time Trial and the multiplayer modes contain unique distinct maps each. Time Trial itself is both interesting and maybe a little frustrating; instead of letting you aim for getting the best time in Story Mode’s levels, Time Trial contains specialized lap-based versions of its levels. These lap-based maps are then recycled for the split screen multiplayer modes, which see you race to see who can complete the level the fastest, collect the most rings, or… duke it out in an awkward battle arena. Perhaps it was the right idea to focus so much on these ancillary modes; they give Game Land much needed personality, and sets it apart from most of the other games.

And so ends the TSSZ SAGE 2014 Act 2 Review Slew. Thanks everyone for reading, and remember: there’s still one more day left! Get out there and play whatever you haven’t seen yet!