Dragons are totally different than Hedgehogs

It’s weird to finally play Freedom Planet. TSSZ is small enough that we’ve never been afforded the ability to play preview builds of games. Although if what sites like GiantBomb say is true, “preview builds” in the traditional sense have almost gone extinct. Freedom Planet has been a special case. I’ve watched closely as this game has evolved over the years. I remember the earliest builds, when Lilac was still a purple hedgehog and health was measured in gold rings. The Freedom Planet of today is a very, very different game from that, but it still gives me a unique perspective that I haven’t had on most games I’ve written about. I was among the first to tell Freedom Planet‘s primary developer, Stephen DiDuro, to cut the game’s already tenuous ties to Sonic the Hedgehog and spin it off into an original game. I’m not saying this to boast, but just to make my connections clear. I wouldn’t necessarily consider us friends, but we’re certainly friendly and did originate from the same community. On rare occasions I offered feedback during the development of Freedom Planet. That being said, I’ve always strived to remain as unbiased as I can in all matters regarding community projects, and I do not intend to treat Freedom Planet any differently. 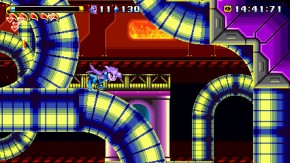 A lot of people are quick to point out Freedom Planet‘s resemblance to Sonic the Hedgehog, but the fact of the matter is, I don’t really get a Sonic vibe from actually playing Freedom Planet. It can be a pretty fast game when played the right way, and has the Sonic physics system, but it requires more thoughtful play, with a lot more puzzle solving and melee combat than Sega’s speedy hedgehog. But it still retains that classic Sega feel. Some might liken it to a lost Sega Genesis game; I disagree. Maybe it’s splitting hairs a little, but I think this feels specifically more like a Sega Saturn game. The style of the music is very evocative of mid 90’s Redbook CD audio and the game’s copious usage of fully-voiced dialog overlaid on top of in-game cutscenes is definitely a hallmark of that era. Freedom Planet would feel right at home rubbing elbows with the likes of Astal and Keio Flying Squadron 2.

Freedom Planet follows the adventures of Lilac, Carol and Milla in their quest to recover a relic known as the Kingdom Stone, a crystal ball with mysterious powers. Each of the three playable characters sports a different style of play. Lilac is fastest, with a Rocket-Knight-style dash that can ricochet off surfaces. Carol has the coolest power-up in the game, allowing her to mount a slick red motorcycle that can barrel through enemies and drive up walls. Milla brings up the rear with the most esoteric move set; her play style primarily revolves around generating green cubes and throwing them at enemies. Though the trio visit many of the same levels, their unique abilities keep things feeling fresh, making it worth the effort to see the game through to the end as each one. 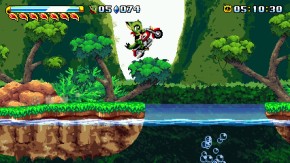 This is seriously the best thing.

Freedom Planet offers two main modes of play: an “Adventure” mode which delivers the bulk of the game’s storyline, and a no-frills “Classic” mode. The game takes full advantage of this distinction, with Adventure mode’s cutscenes indulging in the game’s narrative. I counted one early-game scene in Lilac’s story that lasted for at least 15 minutes with the vast majority of that scene being nothing more than a lot of talking heads setting the table for upcoming events. I appreciate that Freedom Planet usually leaves a lot of the action for the player to accomplish, but 15 solid minutes of nothing but in-game sprites going on about political strife, ancient civilizations, interplanetary struggles and mission objectives wears on the player. Now, I don’t necessarily think Freedom Planet is poorly written, I just think it can be little long winded. I tried to invest myself in the plight of the world, but after a certain point it lost me. Part of that has to do with character development. I recall one specific scene where Lilac reacts in amazement that Carol and Milla “finally agree” on something, but it was never really established that there was friction between them for this to have any impact. Little holes like this start to add up, robbing future scenes of what should be tearful melodrama. Freedom Planet spends so long setting up the world’s machinations that I guess there wasn’t really room for much else. It’s worth seeing once just to get a sense of what’s going on, but you’ll be thankful Classic mode exists. 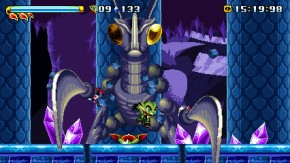 When you actually get to play it, Freedom Planet turns out to be pretty fun. Levels are well designed and expertly paced, never spending too long doing any given thing before some new level mechanic is rolled out. The game’s numerous locales have a strong Asian flavor, deftly avoiding the 90’s platformer clichés of “ice level” and “lava level.” Though levels constantly provide you with new things to do, they tend to go on for quite a while. Most levels seems to be broken up in to four sections, each of which is several minutes on its own. This wouldn’t be a problem, except your progress only seems to get checkpointed at the start of any given section. Should players die, they could be looking at having to replay a sizable chunk of something they’ve already seen. The problem is exacerbated if players quit the game before finishing a level, as they’ll restart all the way back at the very beginning the next time they play. What this means is that I will probably never actually finish Freedom Planet, something I’m not afraid to admit. Fact of the matter is Freedom Planet‘s difficulty spikes really, really hard at the final four levels. After a grueling struggle that drained all of the 20+ lives I had stored up (and even lead to several game overs beyond that), I gave up at the game’s final boss – a mistake that set me back 20 minutes or more. Any of the praise I lavish on Freedom Planet‘s level design does not apply to it’s four-stage end-game gauntlet, which feels oddly sloppy and annoying in comparison to the rest of the game. It’s full of enemies and hazards that can take away nearly half a life bar in a single attack, if not instantly kill you outright for making the smallest mistakes. Never mind the final boss himself, who can destroy you with speed and precision not seen since facing Mike Tyson in Punch-Out nearly 30 years ago. It’s a shame, because for the first 3/4ths, Freedom Planet seems like a fun, perfectly balanced game; but all of that eventually goes out the window rounding the final bend.

I would still recommend Freedom Planet. Most of the complaints I have with the game are minor, especially if you come at it with the right expectations. It controls well, looks great, and offers up quite a lot of content, as long as you keep in mind how difficult it will eventually get. If you’re a 90’s kid looking to recapture the essence of a lost era or simply appreciate retro platformers, Freedom Planet should be right up your alley.