The Hunt Is On Again

If I told you that Monster Hunter 4 Ultimate was one of the most popular games on the Comic Con show floor, you might not believe me, but you should. The game exploded in Japan when it was released in September; it sold nearly four million copies in under four months. So, it’s understandable that Western audiences would want to see what all the hype is about. I was no different. I had never played a Monster Hunter game prior to this weekend, but now that I’ve given it a shot, I’m starting to understand what all the fuss is about.

The game’s name precedes itself; in the demo of Monster Hunter 4 Ultimate, players must explore a given area and hunt down the monster in question. Varying difficulties were available to accommodate hardcore fans and complete newcomers like myself. The expansive areas are split into smaller sections with unique terrain, and the terrain around you is more important than ever. You can now climb walls freely, attack monsters in mid-air, and even grab onto your enemies. Monsters can also use the terrain to their advantage, adding an additional layer of challenge. 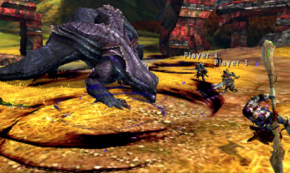 Monster fights are intense, depending on both strategy and good utilization of terrain.

Actually hunting and fighting the monster in question is intense, even on lower difficulties. You may feel the temptation to just button-mash your way through the fights, but that’s simply not an option if you want to succeed. You need to employ strategy and use your moves effectively to bring down the monsters, even the easier ones. Thankfully, there’s a lot you can do to put up a fight: weapon combos, dodging, and aerial strikes can all come into play, so the more effort you put into learning and mastering the mechanics, the more intense your fights become. Gameplay gets even deeper with features like health restoration, weapon sharpening, and more. 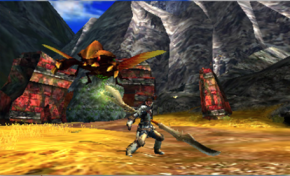 The 3D presentation looks great, though faraway objects can get blurry and jagged.

Since the game focuses on three-dimensional combat more then ever, it was important for Capcom to nail the 3D presentation on the 3DS, and they really did. The effect adds a lot of depth and clarity to the experience; because orienting yourself in the environment is so important, having that additional dimension becomes very valuable. The rest of the graphics are pretty good for the 3DS; terrain is fairly varied, monsters sport solid amounts of detail, and the animations look fluid. Objects can get fairly jagged at a distance with the 3D on, but that was my only major complaint.

The Monster Hunter series may not be the phenomenon in North America that it is in Japan, but Capcom appears committed to bringing international gamers the same intense, strategic experience that Japanese players have enjoyed since 2013. Fans of the series should look forward to this entry, as it looks to be an ambitious and interesting romp that I’ll actually be keeping an eye on in the months to come. If you’re even a little intrigued, you should do the same.

Monster Hunter 4 Ultimate will be released in North America early next year.