Humpty Dumpty had a great fall

How much enjoyment you get out of Sonic Boom: Shattered Crystal will depend on what parts of the overall Sonic franchise interest you the most: do you play Sonic for high-speed, momentum-based, score-focused gameplay? Or do you like Sonic the Hedgehog for its colorful cast of characters and wacky storylines? If you answered the latter, you will probably find Sonic Boom: Shattered Crystal for the Nintendo 3DS to be a tolerable, and maybe even briefly enjoyable experience. But if you’re coming to Shattered Crystal as I did, with the expectation that this should play like any kind of pre-existing Sonic the Hedgehog game, prepare to get sucker punched. 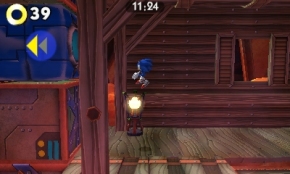 You don’t even spin when you jump.

Rather than try and build from what was established by Sonic Team, developer Sanzaru Games has instead deigned to transfer Sega’s blue hedgehog in to a generic licensed platformer template and lightly sprinkle on a couple of familiar game mechanics, like its trademark gold rings. Shattered Crystal then instantly dethrones last year’s Sonic Lost World as the slowest Sonic game to date. Even with run button firmly held down, Sonic’s top speed is more like a geriatric power walk, ill-fitting of the rocket jet sound it triggers. And yet somehow, this snail’s pace doesn’t stop the game from having slippery controls, which can make hazards unnecessarily difficult to deal with. In a first for the franchise, bottomless pits merely deal damage to the player instead of being an instant death. The problem at hand is that when you’re teleported back on solid ground, your speed isn’t reset. You’d be surprised how easy it is to slip in to a bottomless pit, respawn on the edge of a platform, and then before you can appropriately react, slide right back in to that same bottomless pit a second time, killing you for real. This did not make what I would consider a stellar first impression.

In a nod to 2004’s Sonic Heroes, Sonic Boom: Shattered Crystal gives you simultaneous control over an entire team of characters. By using the 3DS d-pad, players can switch between Sonic, Tails, Knuckles and newcomer Sticks the Badger on the fly at any time. Of course, the four playable characters may as well be the same: all of them handle nearly identically to Sonic, save for a single character-specific special ability, usually mapped to the X button. Most of these abilities are only useful in specific situations in which they are explicitly designed for. For example, you never need to switch to Sticks unless there’s an unreachable fuse that needs to be broken with her remote-controlled boomerang, and Knuckles is useless unless you see a mound of dirt for him to dig in to. None of these abilities are ever used to solve anything that would even be tangentially defined as a “puzzle;” just match the character to the single gameplay mechanic they’re useful for and you’ve basically solved the entire game. Sonic Boom: Shattered Crystal is a game of locked doors where you’re quickly given all of the keys, and you just need to switch to the right one when you’re told to. That’s not fun, it’s busy work.

Busy work is an apt way to describe a lot of Shattered Crystal. The overall structure is not too dissimilar to ye olde collect-a-thon platformers of decades ago, wherein your progress is blocked until you’ve collected enough gizmos to satisfy the game’s requirements. The currency in question here are Emblems, of which three reside in each of the game’s eight main levels. One emblem is granted merely for finishing the level, but the other two are granted for collecting other, ancillary items: nab that level’s five crystal shards and you’ll be granted a second emblem, with the third being the reward for collecting six upgrade blueprints. Unlike previous collect-a-thon platformers, which usually only required you to scoop up a fraction of its loot in order to finish the game, Sonic Boom: Shattered Crystal asks that you find almost everything on your first go. If you’re unfortunate enough to finish a level without meeting the requirements for all three emblems, it’s likely that you won’t be able to progress forward until you go back and get them. Level design even predicates on this: later levels will occasionally split in to two or more separate paths, locking you in to one specific route through the rest of the level. Attempts to backtrack to these alternate routes are stymied thanks to every level being broken up by a confusing network of warp points. What this means is that most levels are designed to be played at least twice, sometimes more, as you hunt for its various collectables through their bland, maze-like interiors. This gets to be very boring, very quickly as you spin your wheels looking for that last missing crystal shard in a level you’ve already been through twice. 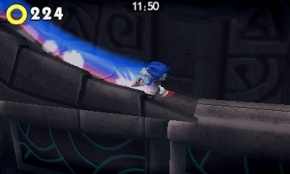 Grab some popcorn, you’re gonna be watching him run for a while.

Occasionally Shattered Crystal will break up the usual platforming shenanigans for a rival race between another character. For all the of the complaints people have had about Sonic games being “hold forward to win”, it’s always been more about pushing the player (albeit aggressively) in the right direction rather than outright forcing them to do something uncontrollably. This is obviously one of the finer details Sanzaru Games was blind to, as you will spend nearly 75% of your time in Shattered Crystal‘s rival races watching the game literally play itself. Occasionally you’ll be given control so you can hop across a platform or two, but before long control will be taken away again as you play audience to multiple linked cutscenes of Sonic automatically racing across hills, around loops and through corkscrews, all without any input from you. This trend continues with the game’s “Worm Tunnel” levels, which are basically what amounts to Shattered Crystal‘s boss encounters. Here, the camera switches to a behind-the-back view, as Sonic contends with a gigantic cybernetic worm as it burrows through a cave system. These Worm Tunnel segments are the closest Sonic Boom: Shattered Crystal comes to reaching the speeds you would expect to see in a legitimate Sonic game. They’re also tragically easy, essentially boiling down to following on-screen prompts and pressing the correct buttons when instructed to. Even when Shattered Crystal tries to pick up the pace, it’s still clearly catering to less-experienced players.

Which I suppose is the ultimate argument in favor of Sonic’s newest 3DS entry: it’s a game meant for children. And true enough, it will probably keep a 12 year old successfully occupied for a weekend. They will giggle along with the cheesy dialog and its narrative junk food. With nearly unlimited amounts of free time, the game’s more tedious elements probably won’t bother them as much, either. It reminds me of when I was 12 years old, and I thought Awesome Possum Kicks Dr. Machino’s Butt on the Sega Genesis was great fun. Now older and considerably wiser, many consider Awesome Possum to be one of the worst games on the Genesis. Kids have different priorities than adults do, but there’s something to be said for the classics that grew up along with us — Mega Man, Mario, and yes, once, even Sonic the Hedgehog. Games that whether you’re 12, or 21, are still just as fun now as they ever were. Sonic Boom: Shattered Crystal for the Nintendo 3DS is not one of those games. It is destined to clutter up the corners of a Wal-mart bargain bin, abandoned next to all of the other licensed dreck nobody will remember in just five years time. And that’s all it really deserves.

The Ten: Summer of Sonic