Ideally, this review should only be a single sentence: Play Bayonetta 2.

But you and I both know I can’t just say “Play Bayonetta 2.” There’s gotta be a reason. How about this: Bayonetta 2 is currently the best action game from Platinum Games. If you’ve never played anything they’ve made, Platinum Games is made up of some of the former Capcom employees responsible for games like Viewitful Joe, Okami, and Devil May Cry. It’s not enough to say that their games are merely “over the top;” just about everything they’ve released goes bigger and crazier than you thought might actually be possible out of an action game. Bayonetta 2 has you face off against a dragon that’s bigger than most skyscrapers as the game’s first major boss encounter, and things only escalate from there. 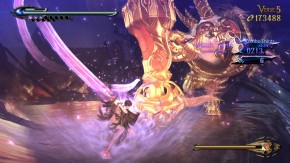 I never get tired of fighting stuff in this game.

As the latest game in a long-running legacy of action games dating as far back as the Playstation 2, Bayonetta 2 is master-class. I’ve struggled many times to get in to Bayonetta’s progenitor franchise, Devil May Cry. My problems with Devil May Cry seem to lie in just how weak Dante feels at the start. Your combat options are extremely limited, and your attack animations feel weirdly deliberate for a game so dedicated to stylish action. Bayonetta has always danced circles around Devil May Cry, and Bayonetta 2 is no exception. Combat is faster and more responsive than ever. Bayonetta herself starts the game fully loaded with plenty of attacks that can be chained together in dozens of different ways, and her repertoire only expands as you play the game, acquiring new weapons and buying further combat techniques. Witch Time is, as ever, the secret sauce that brings everything together. It’s a move that asks you to deliberately put yourself in the line of danger and dodge at the last possible second to expose the enemy’s weakness, and it never gets old.

As a sequel, Bayonetta 2 improves on the original in every possible way. The original Bayonetta was a fantastic game, but there’s no denying that it had a few rough edges. In particular, its length. Bayonetta ended up running out of steam at a certain point; its slow drip feed of new monsters to fight stopped almost entirely, with every level forcing you to run through the same parade of creatures, often in the same order, over and over and over again. Be it from Nintendo’s involvement with funding the game’s development, or simply by virtue of sequels being bigger and better, Bayonetta 2 is almost constantly taking you new places and showing you new faces. 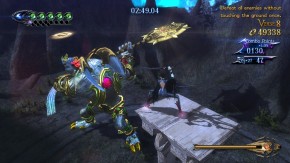 It also gives you more to do, too. The original game seemed to be pretty single-minded: you’d run down a hallway, get to a combat arena, duke it out, and repeat that process until the level ended. On a rare occasion, you’d contend with a driving or flying minigame that would overstay its welcome, but there wasn’t much in the way of down time or variety. Bayonetta 2 is a much better paced game overall, largely because it encourages exploration more. Both Bayonetta and Bayonetta 2 have special challenge rooms tucked inside of their levels, but when I finished the original game in 2011, I don’t think I ever found a single one. Bayonetta 2 makes their presence known without making anything too obvious, and other gameplay elements better nudge you to go poking around the environment between combat encounters, too. Even the aforementioned minigame segments feel more in balance with the rest of the sequel. It’s all around just tighter, smoother, and more engaging.

As a game that stands on its own, Bayonetta 2 is absolutely gorgeous. 2014 was the year that the Wii U proved that so-called “last gen” games don’t have to mean ugly games, and Bayonetta 2 is yet another solid example. A lot of that is strong art direction, and Bayonetta 2 is a feast of bright colors and intense action. It’s actually a little weird going back to the original Bayonetta and seeing how drab and washed out a lot of its environments were, and its refreshing to see Bayonetta 2 so lovingly embrace deep blue skies. Even when we see Hell, Platinum shows us incredible vistas full of vivid shades of pink and red. It’s almost an overload — a few boss encounters had me executing Witch Time dodges on what felt like instinct alone because I was almost blinded by the color explosion — but it’s a welcome overload, and contributes to Bayonetta 2 having a vibrant energy that most other games can’t compare to. 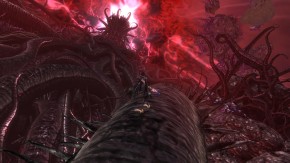 Inferno is menacing and beautiful.

If there was one area where you could potentially have an issue with Bayonetta 2, it would be in its content. Bayonetta has always been a game series for adults, and part of that has to do with her portrayal as sort of a sexualized character. I wouldn’t even mention it if not for the fact that it seems to be unavoidable, and if you are the sort of person who is easily embarrassed by lingering shots of a woman’s posterior, Bayonetta 2 will be a difficult game for you to get through. There is a degree of debate on whether or not Bayonetta‘s content is pandering or earnest, but in my personal experience, as an adult male who is interested in women, I find little about her character to be legitimately titillating. Bayonetta bucks most of the eye candy stereotypes you can think of: she’s smart, strong, and in control. Rarely seen without a wry smile and a sarcastic remark loaded and waiting to be fired. She’s the type of character who isn’t doing this for your benefit, she’s doing it for her own, and that’s an important distinction to make. The counter argument to that is that Bayonetta isn’t a person, she is the product of a creator, and is therefore judged by different rules. Regardless of what side of the debate you fall on, it’s an unavoidable trait of her character, and in my opinion, you’re better off playing along with it than not.

Bayonetta 2 is everything a sequel should be and more. There are some sequels out there (your Zelda 2s) where it’s clear the developers experimented with new, weird, and unexpected ideas in an effort to better understand what players originally enjoyed about the first game. Platinum knew what people liked about Bayonetta, and Bayonetta 2 succeeds in improving every single aspect of the original game. It’s a bright, colorful, tour de force of pure fun. Even the characters themselves seem to be having a blast. If you own a Wii U, you have no excuse not to play this game, and if you don’t own one… well, now might be the time to start thinking about how you’re going to play Bayonetta 2.

Not so Disturbing Mario Toothbrush at Nintendo World