From the moment PAX began, people have been flocking to Splatoon. It was the longest line during Press Hour by far, and the booth has been at capacity since the show floor opened; I wouldn’t be surprised if it stays capped for the entire weekend. Clearly, there’s a lot of hype for the game, and with good reason. With the Wii U still working to gain mainstream momentum, there’s a lot of pressure on Splatoon to deliver another knockout gaming experience. If the demo is any indication, Nintendo has built a game that, while not quite perfect, is still polished and very fun in its own right. 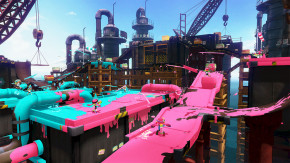 In Splatoon, it’s all about the ink.

Splatoon is more or less how you would expect Nintendo to make a third-person shooter. Wielding ink guns instead of bullets, teams of four players (known as Inklings in the game) battled for control of an arena for two separate rounds in our demo. You can hurt an opponent by spraying them with your ink, but simply taking the other team down isn’t your primary objective; victory is determined by which team can cover more of the arena with their color of ink. If you need to refill your ink meter or move around a little faster, you can transform into a squid at will, which allows you to slide around the arena, hide from enemies, and even scale walls that are covered in your team’s ink.

Unsurprisingly, Splatoon looks very good and plays fairly well, with bright, vibrant color taking center stage. Character designs are full of personality, and the ink itself looks great. Some textures appeared blurrier than I expected, but it’s by no means a bad-looking experience. Gameplay itself is actually a bit more complex than simply pointing and shooting; you need to strategically use your squid transformation to reload and move around the arena, so it quickly becomes more than just a fun distraction when there’s nothing to shoot. You an also earn special weapons like the Bazooka that can cover a lot of ground and help change the momentum of the match. 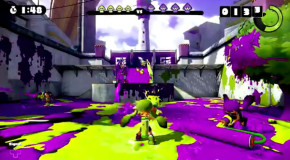 Splatoon’s controls aren’t as straightforward or precise as you’d expect.

It’s not a flawless experience, though, and my biggest issue with the game actually stems from its controls. Physically moving around feels logical enough, and sliding around as a squid is actually a lot of fun, but there’s one big caveat: looking around isn’t as intuitive as you’d expect. Looking left and right was tied to the right analog stick, while looking up and down was tied to the gyroscope in the GamePad. I eventually caught on to how everything worked, but it was fairly tough to wrap my head around it all at first. My “hardcore” 3PS background has likely biased me in favor of traditional control schemes, but the whole affair felt clumsier and less precise than I was expecting. In all honesty, I might have just needed more time to get used to things, but it felt a bit awkward nonetheless.

Despite its flaws, Splatoon is still a good time. It’s a fun, innocent, and relatively innovative twist on the stale third person shooter genre. It may not see the level of success that Mario Kart 8 or Super Smash Bros. have achieved, but it’s nice to see the company taking a risk and trying something totally new. Ultimately, Splatoon is another quirky and unique game from Nintendo, and if you’re a die-hard fan of the company, that may well be all you wanted in the first place.

Splatoon arrives on the Wii U in May.