Printer of Cards Against Humanity, Funemployed, and More

You might not know Ad Magic by name, but you likely know of their products: Cards Against Humanity, Funemployed, and What the Food, just to name a few. We had the chance to sit down with CEO and founder Shari Spiro for an enlightening and in-depth discussion about her company, its products, and her job as a whole.

Note: This interview has been edited and condensed for length and clarity.

TSSZ: Why get into the business of tabletop game printing?

Spiro: Interestingly enough, we did not found the company to get into tabletop game printing. We were a printing company that manufactured a variety of promotional and printed products, but about halfway through 1997, I started getting into playing cards and enjoying getting into printing those, so I launched a website for playing cards. In about the early 2000’s, Google picked it up, and it went to the top of Google! That was really how we got started in playing cards. Then, it progressed into games when Cards Against Humanity contacted us in 2011.

Spiro: Well, the industry’s been changing because it gets faster and faster, so the more technology we have, the faster we can do things – and for the better, in a lot of cases, because communication has improved, and the level of education of my clients has vastly improved. We see that especially with the younger generation, people in their 20’s. They’re some of the best clients because they do their research. They do their due diligence before they’ve even contacted us, so they have something to go on. They’re not coming in cold.

The company has adapted to fit the Kickstarter model. We’ve adapted to be a provider of products for Kickstarter game developers, specifically. If you’re an inventor who’s developing a game and you come to us, we’ve very familiar with what you need. We already know you need a prototype. We now own Print & Play Games (a gaming printing shop), and their own Andrew Tullsen has come on board with us, which is awesome because the first thing a designer needs is a prototype of their game! Andrew has been doing this for six or seven years in the industry already. I wanted to team up with somebody who had the energy to do this for a long time, because this is not a one-shot deal. This is going to be something we’re building for many years.

TSSZ: Let’s touch back on Cards Against Humanity. Obviously, it’s a huge, runaway success for you with millions of people enjoying it. What do you think makes it resonate with so many people? 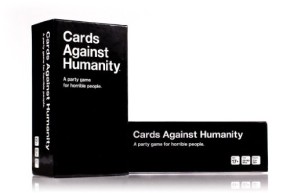 Spiro: It’s just so funny and clever! I had been manufacturing the game for a year and a half before I had time to play it because it grew so quickly. It was, and still is, a full-time job for me as the CEO. That’s my main client. So, even though I have a staff, I pretty much handle Cards Against Humanity myself, because it’s huge. As it grew, it took up more and more time, and I didn’t have a lot of time to play games during that period. After that first year and a half, I was over somebody’s house and we started playing it with this mixed group of older and younger people. I laughed my ass off. Just saying. It was so funny, and before I even played the game, I knew the creators were really funny. What makes it so special is the humor that’s developed from them growing up together. It’s almost like a family, right? That’s actually been driven into the game itself, so I think that’s the special thing that makes Cards Against Humanity so hysterical and so popular.

TSSZ: As your portfolio grows, how do you decide which game ideas you’re going to pursue and ultimately publish?

Spiro: We don’t pick the designers. They pick us. We price their game, and then we talk to them and find out what their goals are, but ultimately it’s the designer that decides if they want to work with us, because we’ll print anything, you know? Then later on, after we print it or maybe even beforehand, we’ll discuss what their end goal is, and if it’s something that we can both work together on, they’re the ones that will ultimately make the decision. I will make the offer, but they have to make their decision. We have a lot of different ways that we work with people.

The interview continues in Part 2; you can read it here.

MN to Pony Up $65k over Botched Law