Reasonable Assessment: The SXSW Panel Is More Important Than You Think

Hello, hello. I’m Noah and I’m new the commentator at TSSZ. Welcome to my segment! Sit down and rev up a spindash. We’re about to get started.

For my first article, I’d like to address a certain sentiment that seems to be prevalent in the community right now.

“The panel didn’t have a game announcement. Therefore, nothing happened.”

That is the belief that a number of Sonic fans have regarding the SXSW 25th Anniversary panel. It’s not necessarily an unreasonable thought. Sonic is a video game franchise first and foremost, and it’s a big year for him. We are all anxious to see a game announcement. There’s no doubt that when a game announcement does finally drop, it will be a big deal.

However, as someone who attended the panel in person, I’d argue that underneath the surface, the panel was more important than you might initially think. Sure, there was no game announcement, but that does not mean “nothing” happened.

Hold on. Don’t start flipping tables just yet. Hear me out.

SEGA has historically pumped out so many Sonic titles that there’s always been one to talk about at any given point. Every time there’s a Sonic event/panel/convention, there’s a new game around the corner that often becomes the focus of the discussion. Technically, we have two spin-off games coming, Olympics 2016 and Fire & Ice, but those are low key releases. There is no announced mainline Sonic game right now, and therefore, no concrete conversation about one.

“Yeah, we know that, Noah. Why is that significant?”
Well, it’s significant for two reasons.

1) SEGA is a company that is notorious for rushing out games that are unfinished, especially Sonic games. The results have been disastrous. But this time, there seems to be no rush. Let’s take this time to appreciate SEGA’s silence. It means they are taking their time for once. Not only has Aaron Webber already said this several times, but it also echoes the apologies made by the CEO of SEGA last October.

“SEGA needs to hurry up and rush out a new game before the end of the anniversary year. What’s the worst that could happen?” -Forgetful Sonic fan

2) The panel was not just a glorified advertisement for a specific, upcoming project. Instead, we were talking about Sonic’s history.

“History’s boring, Noah. No one cares about that. I’m tired of all this nostalgia pandering. Yeah, we all know the Genesis-days were great. Can we move on now?”

Now, hold up just a minute.

Yes, this panel was a history lesson. Yes, some of you already knew the information covered at the panel. I understand why that would disappoint some people. But there’s a key thing that makes this panel special; it wasn’t just a one-sided discussion. It wasn’t SEGA talking to investors or industry people. It wasn’t SEGA being interviewed by gaming journalists. It was a conversation with the fans, with Aaron Webber acting as the medium.

Since there was nothing “new” to talk about, we got to look at Sonic’s old games…

…And since we were looking at old Sonic games, we got a chance to be vocal about them (more on that later). First, allow me to take you to the panel.

I’m inside Ballroom C at the Austin Convention Center in Texas, America. It’s cool inside and the room is full of eager Sonic fans, from children to adults. The air in the room is full of warm adoration for this little blue hedgehog that has made so many of us happy. I’m sitting in third row, the closest I could get. Takashi Iizuka, the man in charge of all things Sonic, is in the room, sitting at the table. He’s mere feet from me. He’s mere feet from all of us.

As the panel goes on, Iizuka is looking out at us. He’s sees our faces as Aaron goes from slide to slide. He hears our cheers as we see something we love. He picks up the subtleties in our reactions. He’s taking it all in and there’s nothing being lost over an internet connection. There’s just something electrifying about being physically present in a room that makes things seem much more real than they ever could via live stream, or email, or Facebook message.

To the far right of Iizuka is Aaron Webber. Now, here’s a man with fervor and purpose. Even though he’s standing on the stage as an employee of SEGA, he could as easily be sitting in the crowd as a fan. In fact, before the panel started, that’s exactly what he did. Before the other panelist came out, he sat down right in front of me in the only empty chair in the building. “What’s up guys,” he said in the most down-to-the-earth tone. He talked to us openly and casually. He asked us how we felt. He asked us what our Sonic favorite game is. It was like he was just one of us. 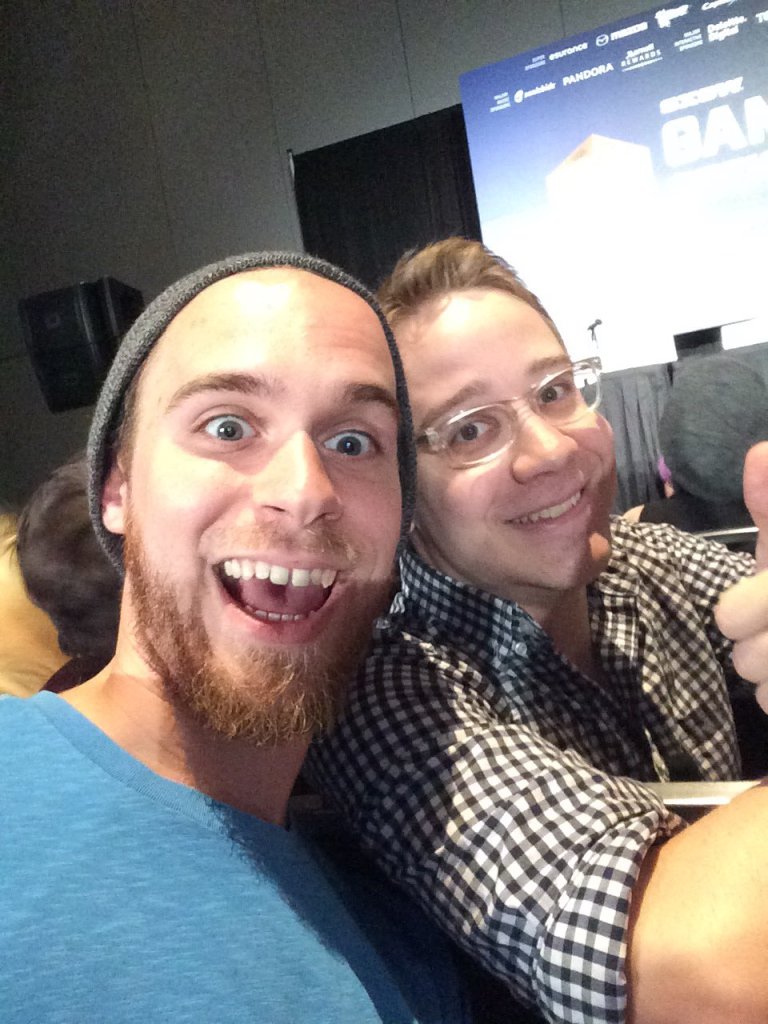 And when he went up on stage to start the presentation, he didn’t stop being one of us. He didn’t “turn off” his fan mode. His passion for this series was still beaming through even from the podium. He passed that passion around the room. He knows what the fans want and gave them the chance to be passionate as well.

He made sure to mention Jun Senoue and Crush 40, and made sure the crowd had a chance to cheer loudly for them. Since Jun hasn’t directed any of the Sonic soundtracks in several years, I get the feeling that he’s been slowly phased out of the franchise. I find this unfortunate and I know many Sonic fans really want him and Johnny Gioeli to return. Those of us in the crowd got to express our love for Jun and John.

What’s something else a lot of Sonic fans want? The return of the Chao garden. Aaron was much more obvious when he mentioned the Chao. “I really need to get your reaction to this,” he said. “They should totally bring them [the Chao] back, right?” The room erupted. The audience, myself included, made it very clear how much we love those little blue guys.

…And Iizuka was there, soaking it all in. 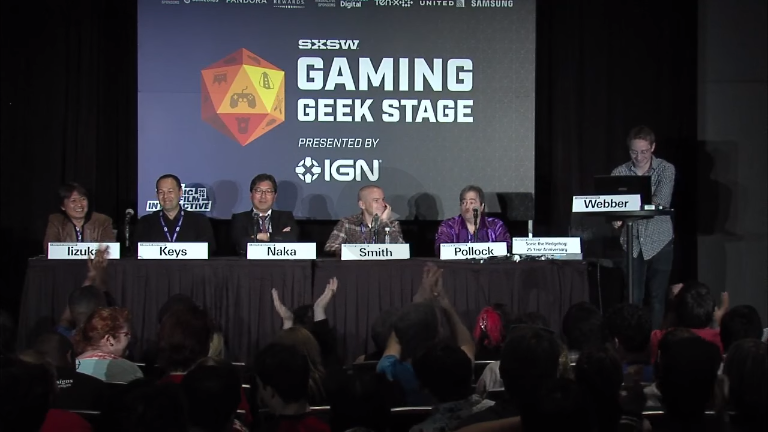 If you rewatch the stream, you can see my dumb beanie-clad self clapping like a trained seal.

Let me go on a side rant for a second. Many of us can agree on this; one of the problems that has plagued the Sonic series is its constant fixation with trying to reinvent the wheel every other release.

If you are look at Sonic Team’s track record, the phrase “if it ain’t broke, don’t fix it” appears to mean very little to them. I don’t know if it’s a lack of confidence or pressure from above but Sonic Team can’t seem to make anything and stick to it. They have felt the need to constantly reboot Sonic. Just look at Sonic 06, Sonic & the Secret Rings, Sonic Unleashed, Sonic Lost World…the list goes on and on.

Don’t get me wrong; I’m not saying that they shouldn’t innovate. It just feels as if every time they accomplish something, they retcon it and start from scratch. In fact, I’d say their best games came out of the few times they actually stuck with an idea and built upon it.

This panel was not about the latest reinvention of Sonic. This was not about reacting to a new product. This wasn’t just a celebration of Sonic’s history; this was an evaluation of what has made Sonic great throughout his highs and lows. At the panel, the fans, however small a fraction of it, were sending feedback to the people who make the games. There was no new game to distract anyone. We don’t have that opportunity very often.

Now that the panel is over, I think we can look at it with a less “hype-train” viewpoint and begin to see the hidden value within it. On a surface level, sure, maybe it wasn’t anything huge (Big The Cat notwithstanding). Sure, it’d been cool if there was a new image or screenshot of the next Sonic game. But just underneath the surface, I’d argue there was more going on. Maybe it wasn’t the best panel in the history of panels. But was it a panel where “nothing” happened? Absolutely not. I’d asses that it has a lot more value than we’ve been giving it credit.

And that much, I hope, is a reasonable assessment.

Noah Copeland is a somewhat-interesting human. He makes films, makes music, and stands at exactly average height. You can find him on Twitter @NoahCopeland, where he posts his creative works and slightly less-thought-out “articles” of 140 characters.