Although in the west we had to settle with only one, not without a lot of effort by SoA’s Sam Mullen, Japanese classic Sega fans are lucky to be able to enjoy most of the fantastic digital 3D classics games released on Nintendo 3DS at physical collections, called “Sega 3D Fukkoku Archives”. There are two released there ( being the second one the one that was able to be released at America and soon in Europe too. In fact, it will arrive to European stores next November 4th) with a third one coming soon.

Famitsu magazine just revealed the third of their Sega 3D Classics collection, called “Sega 3D Fukkoku Archives 3: Final Stage”. It includes the remaining titles from their Sega 3D Classics line not available at earlier releases: After Burner II, Super Hang-On, Bare Knuckle II ( called Streets of Rage 2 at the west), Sonic the Hedgehog 2 and Gunstar Heroes. But not only that. Like as is almost a tradition, this one will also include an exclusive, never released before game. But the name is still unknown. It will be the most voted game on a survey that came included with the previous game. Famitsu revealed the top 2 to 5, but not the chosen title. The list goes like this:

Sega 3D Fukkoku Archives will be released at Japan next December 22th. There is no release date for the west, but we hope there is a chance to bring it to the west, like the Vol.2 had. 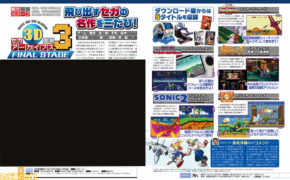 Sonic Colors’s Green Wisp, In Art and In Action