Are you a kid or a squid? That question was central to Nintendo’s quirky shooter Splatoon when it launched in 2015. Players quickly took to the game’s unique personality and style of play, and it proved to be one of the most successful games to grace the Wii U. In a surprise twist, Nintendo announced a full-fledged sequel to the game earlier this year, and it’s finally time to see how it stacks up.

For better or worse, Splatoon 2 plays more or less exactly like the original game did. You still play as Inklings, young creatures who can transform into squids at will, and the objective in the returning Turf War mode is still to cover the arena with more of your team’s ink than your opponents can. Thankfully, moving, shooting, and transforming into a squid all feel as fast and fluid as they did in the first Splatoon. Using the motion controls to aim still feels a bit awkward for the unengaged, but even complete newcomers will be quick to adapt. Of course, some will prefer a more traditional control scheme, and though I could not do so in the demo, you will be able to turn the motion controls off in the final release. 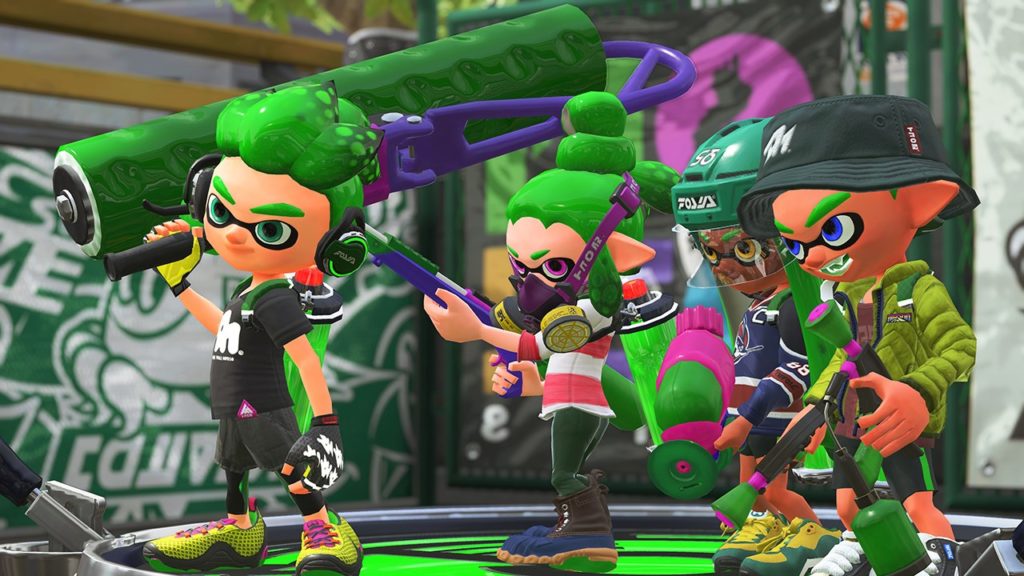 It’s not all the same, though. New features include additional weapons, like a dual-wielding setup that pairs very well with the new roll mechanic. Revamped special moves are also along for the ride; for example, you can perform an Iron Man-esque ground pound that inks the area around you, or you can hover in the air and rain ink missiles down on the arena below you. As with the original game, mastering the utilization of these special moves is key, and using one at the right time can change the flow of battle. Most of the weapons that return from the original game play just as they used to, so if you’re already comfortable with any one weapon or weapon type, you’ll feel right at home here.

At first glance, the two games look exactly the game, but upon further inspection, the sequel takes the edge over its predecessor. Improved texture work, rock-solid performance, and a silky-smooth framerate make Splatoon 2 lovely to look at on either a big-screen TV or the Switch’s internal display. Sadly, next to no anti-aliasing is present, so most background objects look very jagged; you generally don’t notice this in motion, but it will definitely catch your eye if you’re playing on a TV.

Bringing a new Splatoon game to the Switch was a no-brainer; fans of the original game will likely engage with its sequel, and those who never purchased a Wii U will now have a chance to join in the fun. All signs point to the game looking, feeling, and playing very similar to its predecessor, and depending on what you believe a sequel should consist of, this is either exciting or disappointing news. Though some may criticize Splatoon 2 for being more of the same, others will surely praise it for exactly the same reason; in either case, we’re in for another healthy dose of Inkling action.

Splatoon 2 launches on the Nintendo Switch this summer.