It is time for this month’s edition of In-Depth, the monthly article series where I do a case study on a particular SEGA/Sonic subject with research that includes the historical record, which will have a huge presence this time, and other sources such as interviews. Today is my birthday, so I thought it would be a perfect time to do a pinball-related In-Depth article for this month. And, well, there’s one aspect of SEGA that not many know.

SEGA used to have a division specifically for making pinball machines. But this isn’t the first time they tried this. Let me take you back to a time before SEGA experimented with video games.

In the 1970s, pinball was taking off in popularity, back when video games were struggling to do the same . Companies like Bally, Williams, and Gottlieb were seeing success and more companies wanted a piece of that pie. SEGA decided to release pinball tables of their own, making over 20 pinball tables over the course of the decade.

SEGA would stop production of pinball tables in 1978, which was just in time. The pinball industry’s popularity fell as video gaming took off in the 80s and pinball machines were replaced by arcades. Instead, SEGA migrated to primarily video games in the early 80s and well, the rest is history on that end. But SEGA was not done with pinball machines.

Pinball began to take off again in popularity in the early 90s. Capcom entered the pinball market, along with Alvin G. and Company. The latter was founded by Alvin Gottlieb the son of David Gottlieb (founder of the Gottlieb company I mentioned earlier on in the article). This was not the only time a father/son relationship with founding pinball companies happened, either. In fact, one had already happened in the late-80s. Remember Williams? That was co-founded by Sam Stern. His son, Gary Stern, would found Data East Pinball in 1985, with thanks to funds from the already-established Data East Japan and by purchasing the pinball division of Stern Electronics, Inc. Data East would make pinball tables from 1987 to 1994, with one of them being the first to have stereo sound.

The revival of pinball’s popularity was only brief. By 1994, the industry was starting to lose popularity and finances again. As a result, the pinball factory was sold to SEGA in 1994. As a result, Data East became Sega Pinball Inc. for 5 years, from 1994 to 1999, with Gary Stern becoming the division’s president. The company would produce another 19 tables, some of which have become very notable in the pinball community. Two of these tables, Mary Shelley’s Frankenstein and Starship Troopers, can be found on FarSight’s The Pinball Arcade and Stern Pinball Arcade.

So why are SEGA tables on Stern Pinball Arcade? Because, well, SEGA entered the pinball industry at the worst time. By 1996, Gottlieb, Capcom, and Alvin G had all closed. In fact, by 1997, SEGA and Williams were the only pinball manufacturers left. Williams would leave the industry on October 25th, 1999, and the declining sales resulted in SEGA leaving the market again the same year by selling all the division’s assets to Gary Stein, the division’s president.

But Gary was not finished with pinball. He founded Stern Pinball Inc., which still runs today, even in 2017. It is also how FarSight’s Stern Pinball Arcade has SEGA tables. Because SEGA Pinball is now Stern Pinball. The pinball industry remained a Stern-exclusive market for 12 years, from 2001 to 2013, when Jersey Jack Pinball put out a table for The Wizard Of Oz. Another company, Heighway Pinball, joined the fray in 2015. Both Jersey Jack and Heighway still make pinball tables today, along with Stern. Speaking of Stern, a lot of the people that worked in SEGA’s pinball division, some even during the Data East days, are still with the company. This includes Data East/Sega Pinball designer John Borg. Stern Pinball recently put out pinball tables for Ghostbusters (based on the 80s one) and for the band Aerosmith.

SEGA’s pinball tables still have a following today with the pinball community as a whole. Sonic the Hedgehog never saw the release of his own pinball table, along with many of SEGA’s video game IPs. However, Sonic does make occasional cameos in the various SEGA tables, such as an appearnace at the end-of-game match sequence in Starship Troopers:

He even shows up on, get this, SEGA’s Baywatch pinball table (thanks to Chris C. for coincidentally sending this through a tip to us later the same night that I had largely written up this article): 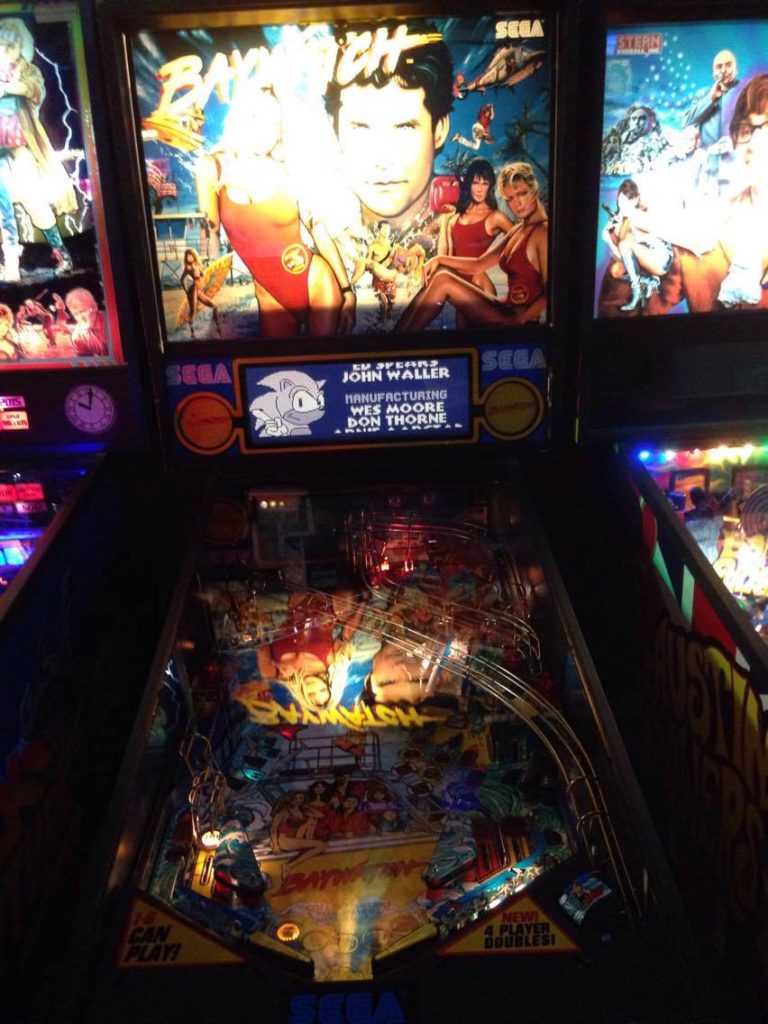 Sonic also makes a cameo in the Mary Shelley’s Frankenstein table, and there’s even a Sonic CD-like sound effect in it. However, licensing issues make it tough for FarSight to recreate SEGA’s tables. The Sonic cameo and SEGA logos had to be removed from both of FarSight’s Pinball Acade titles, which are still supported by the company with new tables today, because of this.

Pinball is one of the many legacies that SEGA has created in their many decades of being a company. Although SEGA now focuses on pachinko, pinball’s ancestor and “distinct relative”, Stern Pinball carries on the torch that SEGA had passed back to them 20 years ago.