The Sonic fan-base is pouring over this crazy Sonic Forces trailer that shocked us with an all-star motley crew of Sonic “villains.” I typed “villains” in quotation marks because two of these characters aren’t even villains! We know all too well that both Chaos and Shadow had character arcs that revealed them to be heroic. Yet here they are, looking all menacing next to Zavok, who is textbook “bad guy,” without any explanation why these guys are acting all big and bad.

It sent fans into a frenzy, questioning these characters’ motives and whether or not this game would respect backstories. Take a look at the community’s response.

The apologist argument was simply this, “Don’t jump to conclusions! Sonic Team will surely have a good explanation for everything.”

“Why would you assume that Sega wouldn’t care?” the apologists ask. Well, perhaps it’s because of Sega’s track record of ignoring, retelling, changing, and retconning a character’s story mere moments after it’s established.

How many times must Tails learn to be independent?
How many times can Knuckles get tricked by Eggman?
Is Blaze the Cat from the future or another dimension?
Why does Silver the Hedgehog randomly show up in the current time period without motivation?

And for crying out loud, when was the last time Knuckles was seen within 100 feet of the Master Emerald? It’s as if our beloved red echidna has a restraining order against the very thing he’s supposed to be guarding. Furthermore, let’s not forget that this new villain trailer came out mere days after an Iizuka interview pretty much stated that any sort of Sonic canon is loosely grounded and is liberally adapted to fit whatever they need it to fit at the time.

I’d like to flip the apologist question around and ask, “Why would anyone assume that Sega WOULD care?” They’ve clearly set a precedent that says they don’t, at least, not whole-heartedly.

But alas! There’s a glimmer of hope in the face of canon-less anarchy. In a Famitsu interview, Sonic Forces producer Shun Nakamura says that “If you think about mysteries such as ‘Why is Shadow on the enemy’s side?’, I’m sure you will enjoy the story even more.” Perhaps, Sonic Team actually has a reason why Shadow and Chaos are being so grumpy. However, this doesn’t guarantee that this reason will be a good one.

That is…unless there’s a second glimmer of hope. 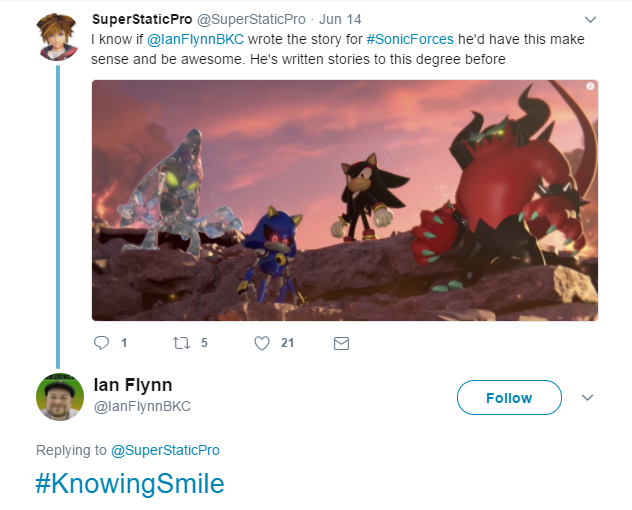 Holy cow. Ian, don’t do this to me. I am cautiously containing all my hype and tempering my expectations, but if there is a chance that proven comic book writer Ian Flynn is involved in this game’s narrative, I rest some of my fear at his feet….or his pen, rather…..or I guess his keyboard? *Amen* Either way, I’d like to call your attention to a “secret project” listed on Flynn’s website.

It’s been previously announced that Ken Pontac and Warren Graff would be returning to write Sonic Forces, much to the dismay of everyone but the jaded game journalists that liked Colors.* However, Ian Flynn’s video game portfolio lists an unnamed upcoming project in which he acted as a “script doctor for dialogue in a few cutscenes.” Could this be Forces?

Maybe. Maybe not. Keep your dreams in check, this secret project could easily be something that has nothing to do with Sonic. And even if it is Forces, Flynn’s role sounds rather limited. He may have simply wordsmithed some lines and had no influence on the grand narrative and motivations of why Chaos and Shadow have joined this game’s rogue gallery. Who knows? Only time will tell.

Until then we can only muse about it. Hey, it makes for a good talking point, eh? (See what I did there)

*Please don’t kill me, Pontac-Graff fans. I know you exist and I know you’re not all jaded game journalists ….just most of you.

Noah Copeland is a somewhat interesting human. He makes music, makes films, and stands at exactly average height. You can follow him on Twitter @NoahCopeland