SAGE is almost over, folks! And so, too, are these reviews. Tomorrow’s the last article! And once you finish reading this article, what’s left to review tomorrow should all but be known. That being said, if you think I’ve somehow overlooked one of your games, don’t hesitate to point it out to me. Hopefully, I’ll see it in time and squeeze it in for tomorrow. But enough about then, let’s talk about now: 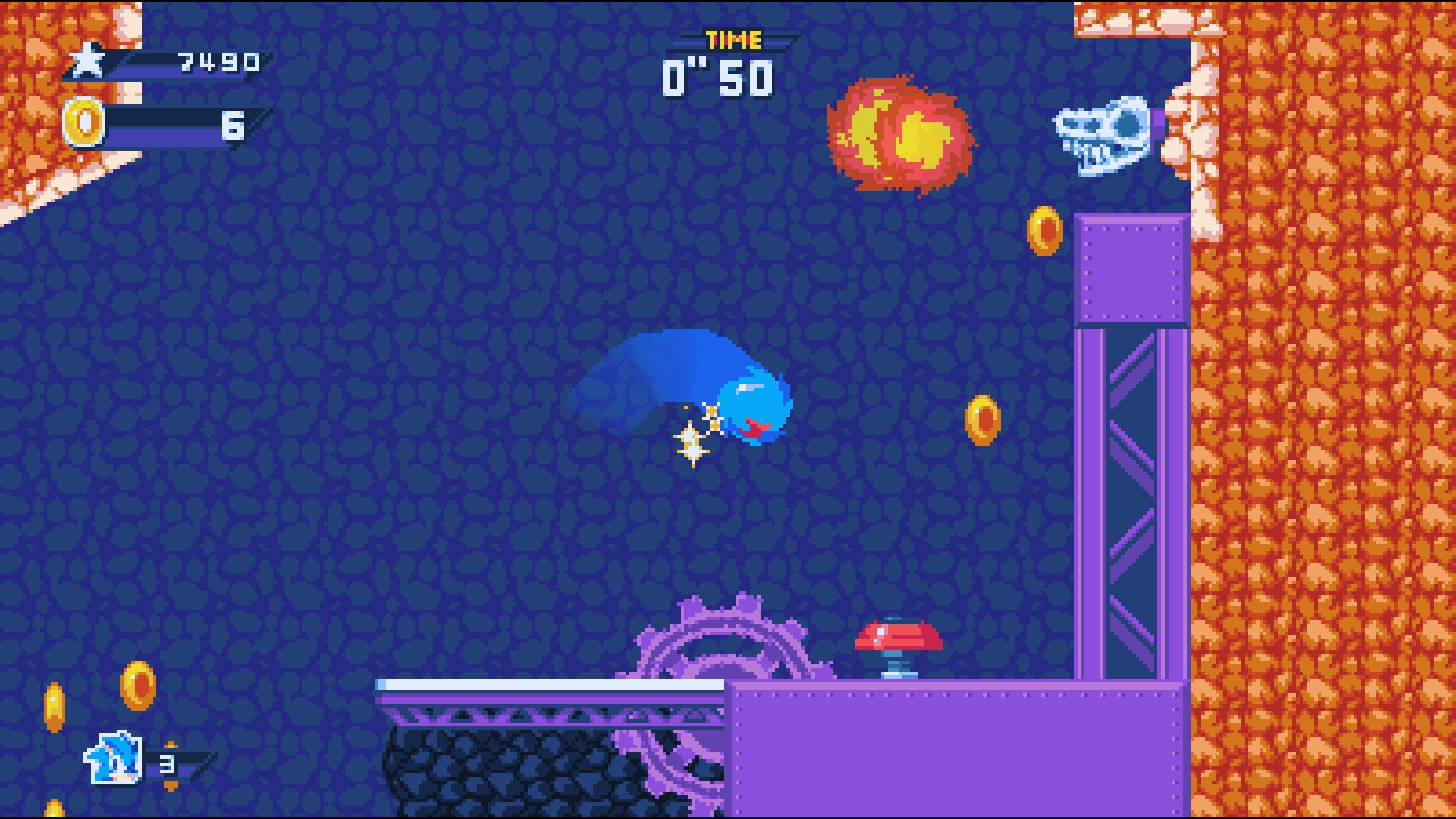 Here’s a game I absolutely love the look of. Petit Hedgehog is one of those rare fan games that makes all of its own sprites — characters, levels, enemies, all of it is original, and all of it looks pretty sharp. Shading is simple, but colors pop and it plays pretty okay. It’s still a little buggy, in my opinion; in Jade Lagoon, Sonic would sometimes run across the water… except there was no water to run across, so he’d just go charging off into thin air like a Looney Tunes character. It also seems rather easy to accidentally miss checkpoints — they’re placed close to pathways but are often just slightly out of reach. It creates a scenario where if you want a checkpoint, you have to stop and double back for it specifically. I’m also not entirely sure moving the roll to a button instead of merely pushing down on the d-pad; seems a bit weird to go against 25 years of established control systems. And then the camera just feels a little jittery; I thought maybe it because I’d fiddled with the camera settings, but the options screen doesn’t seem to be finished (everything defaults to off, and once I turn it on, it’s stuck that way until I back out and reload the options menu, which turns everything back off). And, of course, no controller support, though that sounds like it’s coming in a future update. Still, in spite of that list of caveats, I think the game does more right than wrong. It’s worth a look. 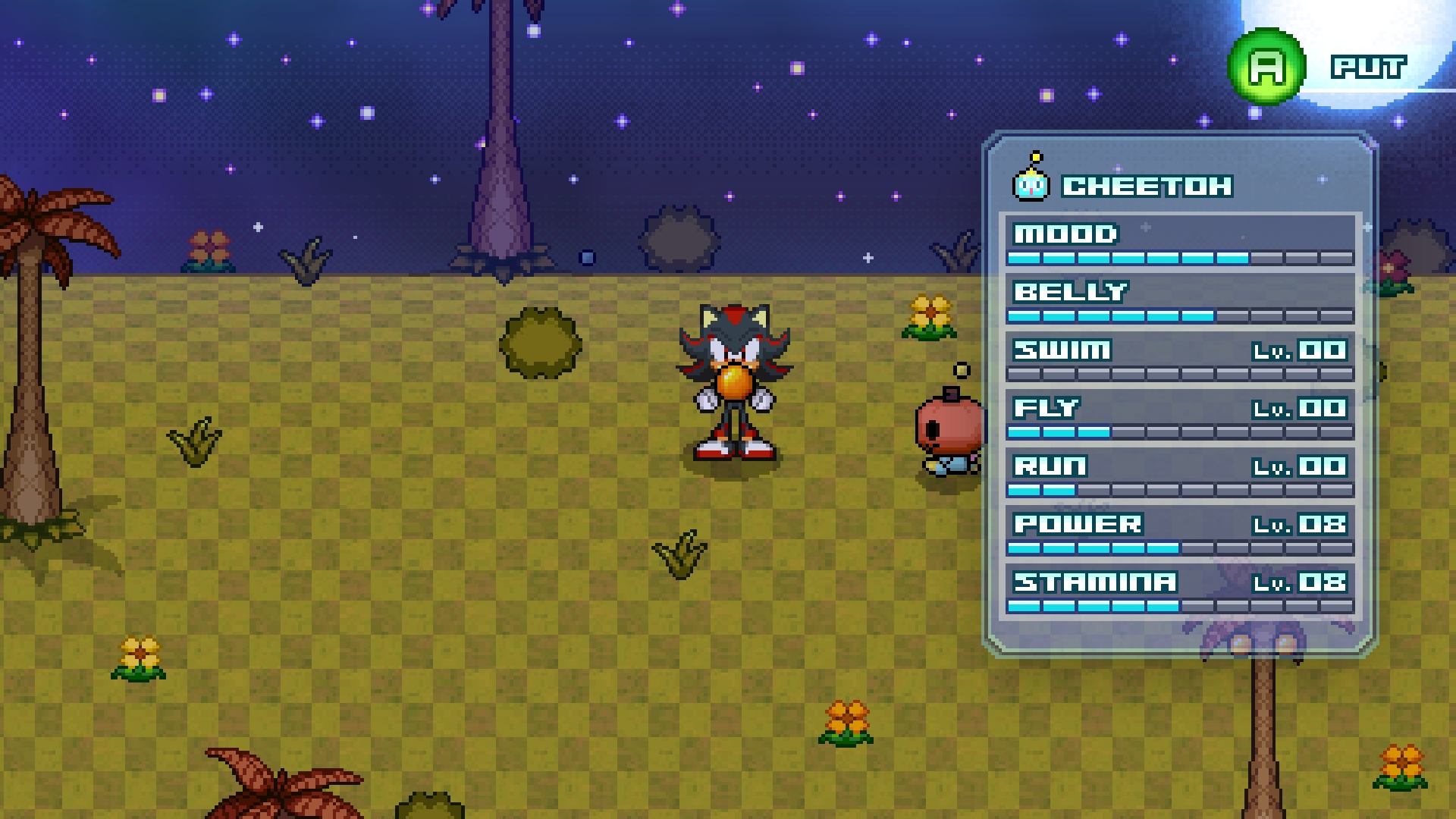 I have an admission to make, and it’s an admission I may have already made some other year at SAGE, but: I never really understood the fervor around raising Chao. It was something fun to poke at back in Sonic Adventure 1 and 2, but the virtual pet fad died out and it never seemed particularly important to bring back. Fun while it lasted, I guess, but it didn’t last, of course. Playing nanny to a little blip of data that was way too obviously just a collection of simple countdown timers got old fast. I say all of this, of course, to also admit that I played like an hour of Chao Resort Island and had quite a bit of fun. It’s very polished and expands Chao raising to feel just a touch more like both Animal Crossing and Monster Rancher. Part of that means grinding out repetitive minigames to earn currency so you can buy items to increase your Chao’s stats, but I get the feeling that’s kind of standard in this genre (I did, after all, own the previously mentioned Monster Rancher on Playstation). On the plus side, there’s more minigames here than were ever in the Sonic Adventure Chao Gardens, so there is actual new gameplay to be had, even if it is the typical hands-off variety of watching your Chao and cheering it on from the sidelines. If you wanted more virtual pet shenanigans, well, this should suit you nicely. Who knows, I may even come back to my Chao (Chief Wiggum and his brother, Cheetoh) some day.

The Big Blow Up 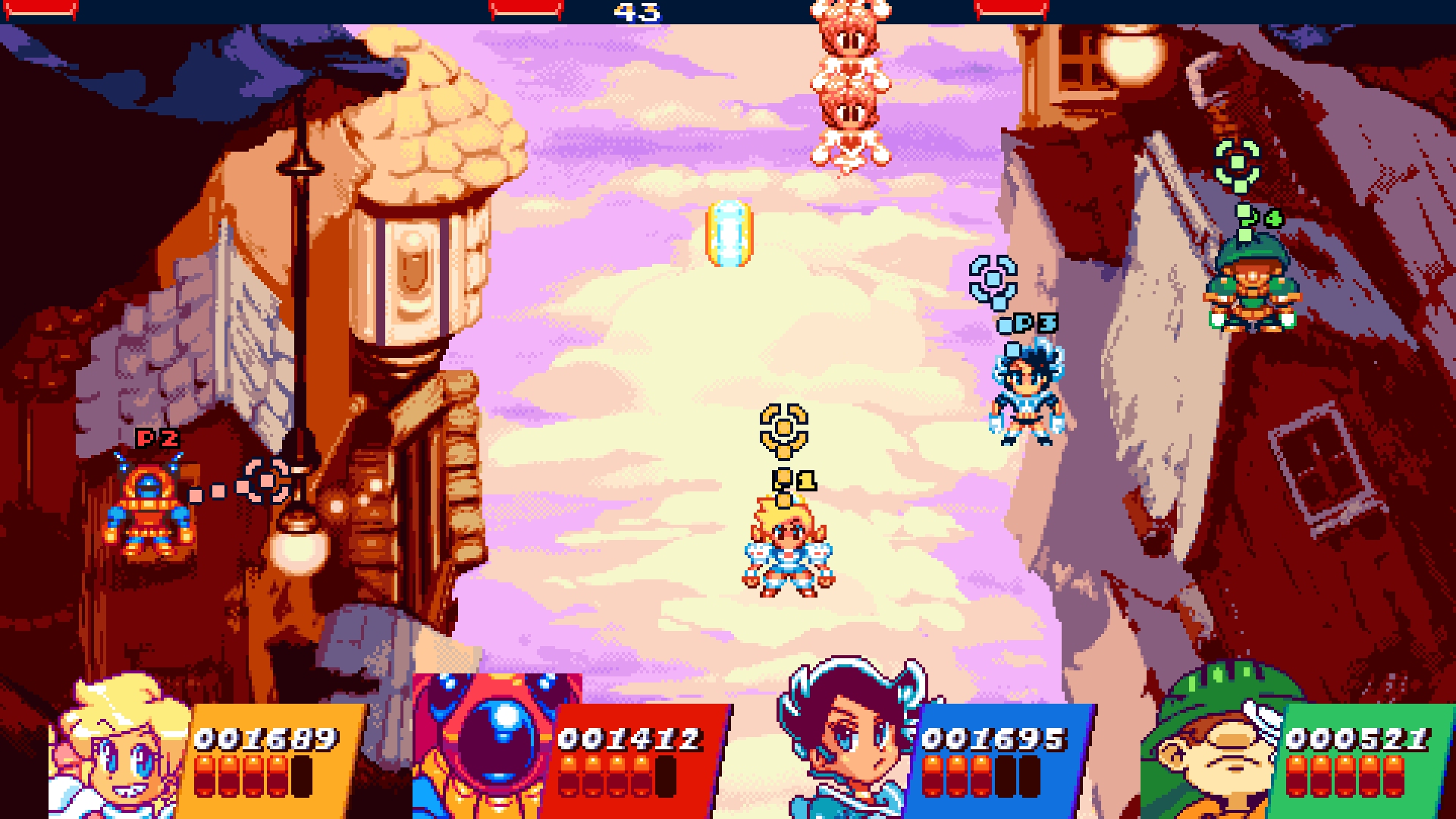 Here’s a pretty creative idea for a 4-player competitive shmup. In short, you have two buttons — shoot, and inflate. Things that are inflated are worth more points when killed, so it’s all about frantically stealing your opponent’s biggest kills so you get all of their points. Now, this is a game jam game, which means certain aspects of production are a little rushed (sound in particular seems to be the most sparse, and so does enemy variety). But the sprites are fantastic and the character art is great. Plus, while you could play this alone, it does thankfully feature CPU opponents to compete with, giving at least some semblance of what the game is going for even if you’re playing it by yourself at 3am (ahem). It’s very interesting, give it a shot. 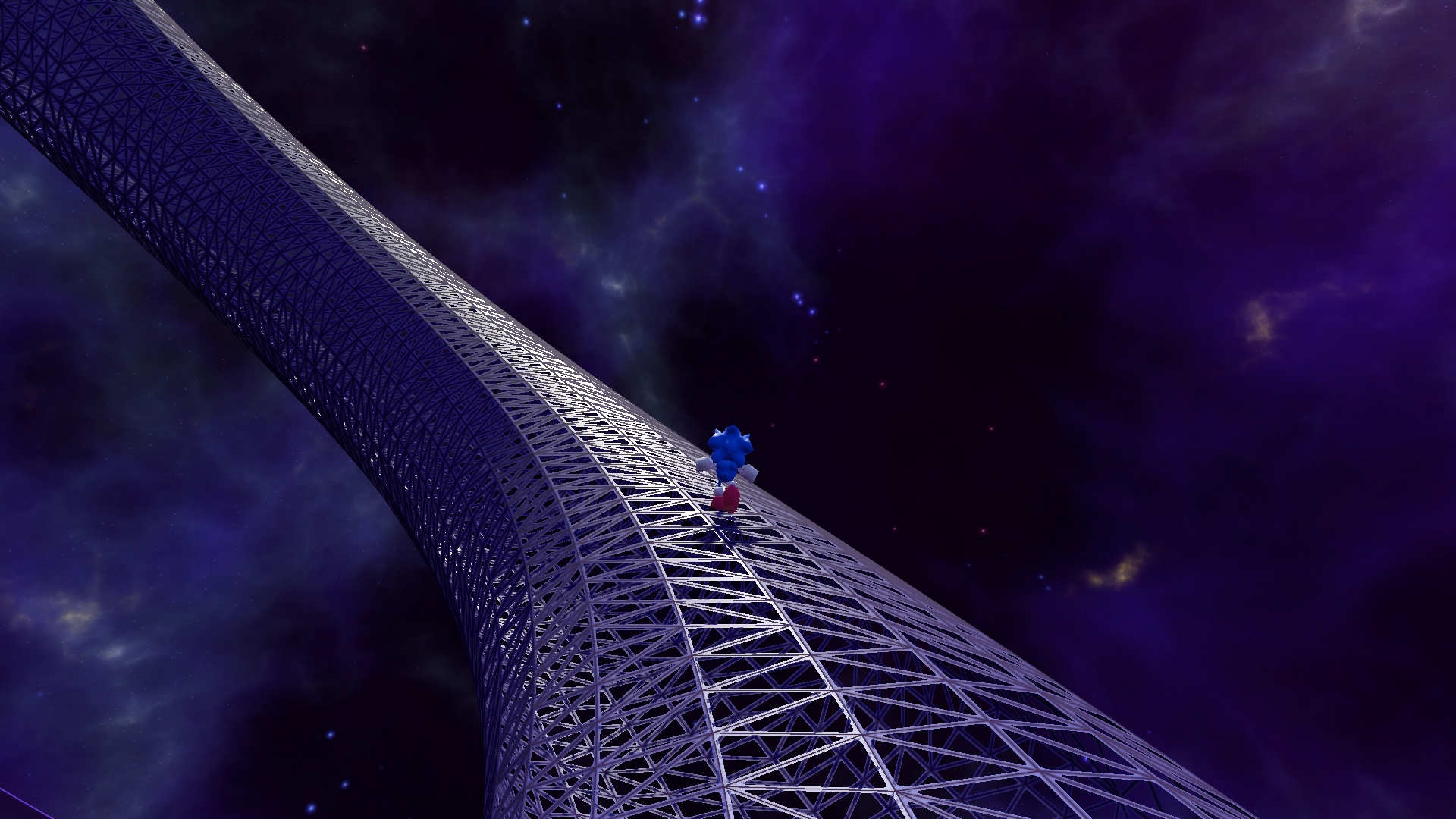 This here’s a very early engine test for a 3D Sonic game made in Unity. At first I thought this was just LakeFepard’s “HedgePhysics” tech, but it appears to be more than that. Well, figuratively speaking, anyway. You’ve got a pretty sweet looking 80’s grid to run around on and a couple of Chaos Emeralds to collect. Each emerald expands Sonic’s abilities, like, for example, giving him a double jump. And… uh, that’s about it! You can explore the very tiny space but there’s not much to see or do beyond that. I suppose it does control well, and I do like the look of this test environment, too. The developer promises a more finished version in the future, so keep an eye out for that. 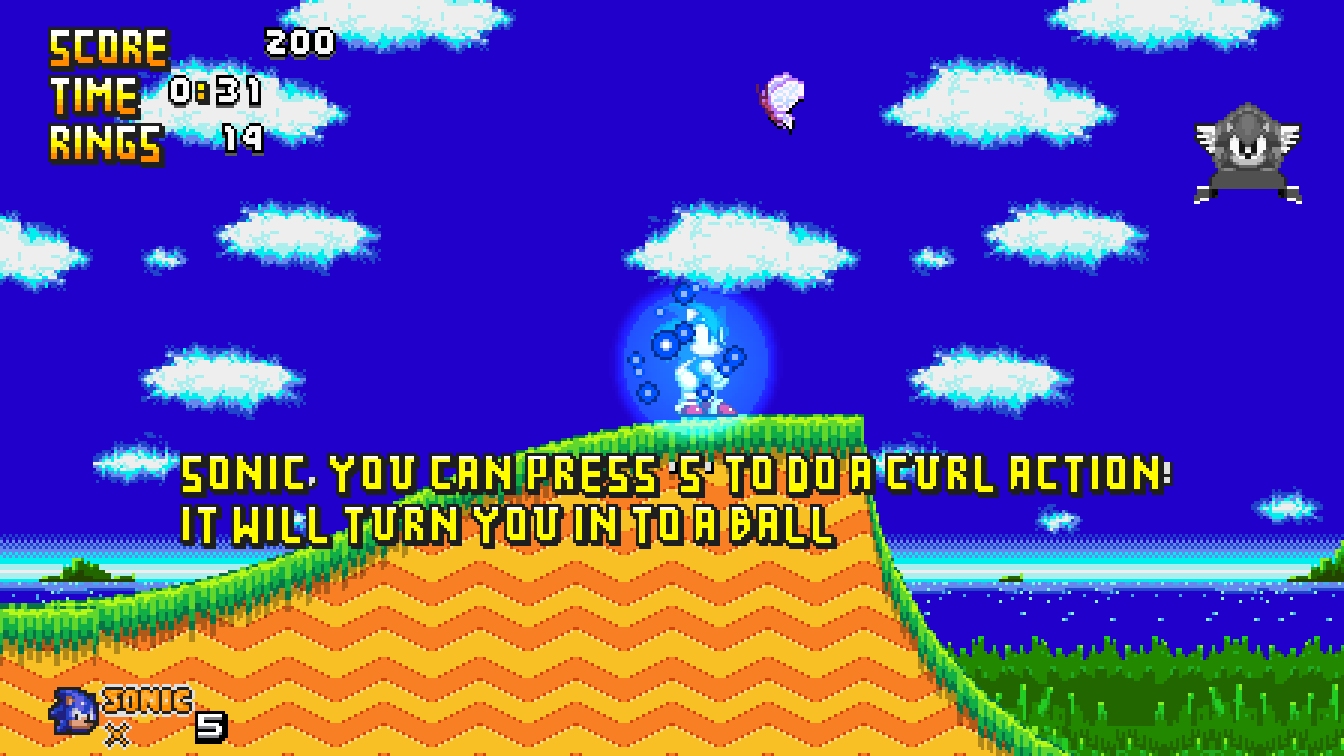 It’s always a good sign when you boot to a message from the game telling you, “If it doesn’t load, just press enter, but that will mess up the music.” And then, once you press enter, you get a second disclaimer screen warning you about other bugs in the game (“most are not my fault.” — only most, huh?). The game that follows isn’t so bad, I guess. You get some new shields, one of which lets you use Sonic Mania’s Drop Dash. But it’s the level design where this game suffers the most. Stages are incredibly linear and fall into a common trap where it’s obvious the base Gmate engine being used supports a half dozen or so different stock enemy types, all of which get smushed into every single level with no rhyme or reason for there being so many different enemies in the same area at the same time. When you think of levels in most games, you’ll get 2, maybe 3 specific enemy types that are related to the environment they’re in, not a hodgepodge of 5+. You’ve got to let players learn and experiment, but the extremely guided level design and the constant flow of new enemy types is doing the opposite and that can be kind of exhausting. 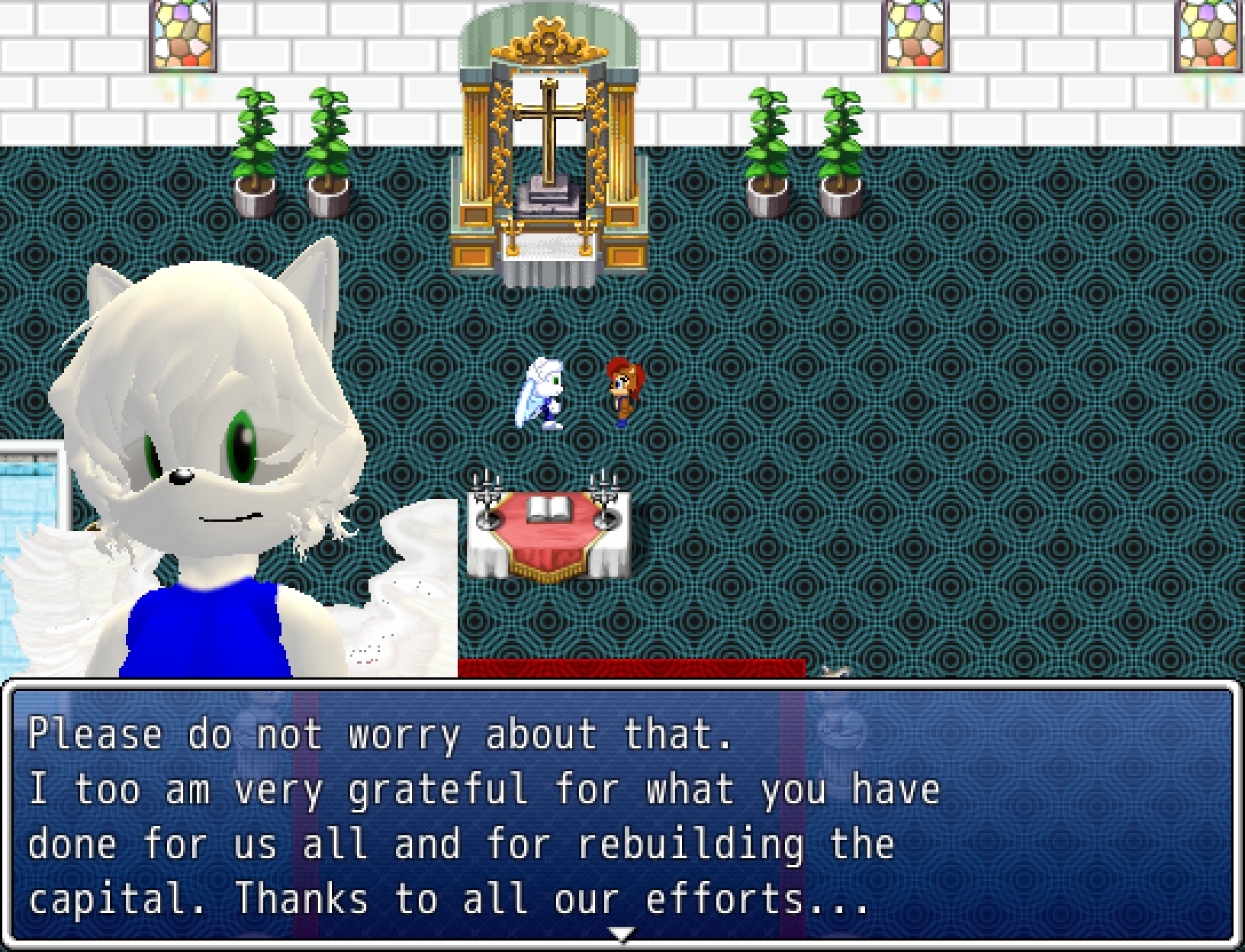 Unfortunately for Forces of Mobius, it’s an RPG Maker game and I have a finite amount of time to review these games. That’s not to say it’s automatically bad, it’s just that RPGs take a while to get going and this one definitely seems to follow suit. Sonic urged me (Queen Sally) to meet him at the racetrack and after navigating a hedge maze, searching what I thought was the entire Castle Acorn, talking to every NPC in town, entering every building, and even venturing into the forest alone, I cannot for the life of me find where this racetrack is. I’m sure it’s somewhere, but I spent close to an hour poking around in the corners of this world and I have to move on (skimming back over my screenshots, Geoffry said Sonic left through the Castle, so I probably missed something there). For what it’s worth, the creator of the game does seem plenty passionate if the intro text is to be believed, though I think his map creation skills leave a little to be desired — the Kingdom of Acorn feels incredibly sparse, and the fact that I entered Sally’s room and there wasn’t any flavor text for her entire wall of bookcases made me a little disappointed (that’s like, RPG writing 101). Then there’s the issue of the game’s art style — ignoring stock RPG Maker assets, the cutscenes have a slightly weird take on the way these characters look; they’re often very tall, sort of bulbous, and yet the men have visible washboard abs. All of it looks like it was probably rendered in Second Life. That’s not a problem insofar as it’s just a little weird to me, I guess. But I suppose what you’re really coming here for is the story, and that’s not really something I can give commentary on in this space, so… I guess… you’re on your own? 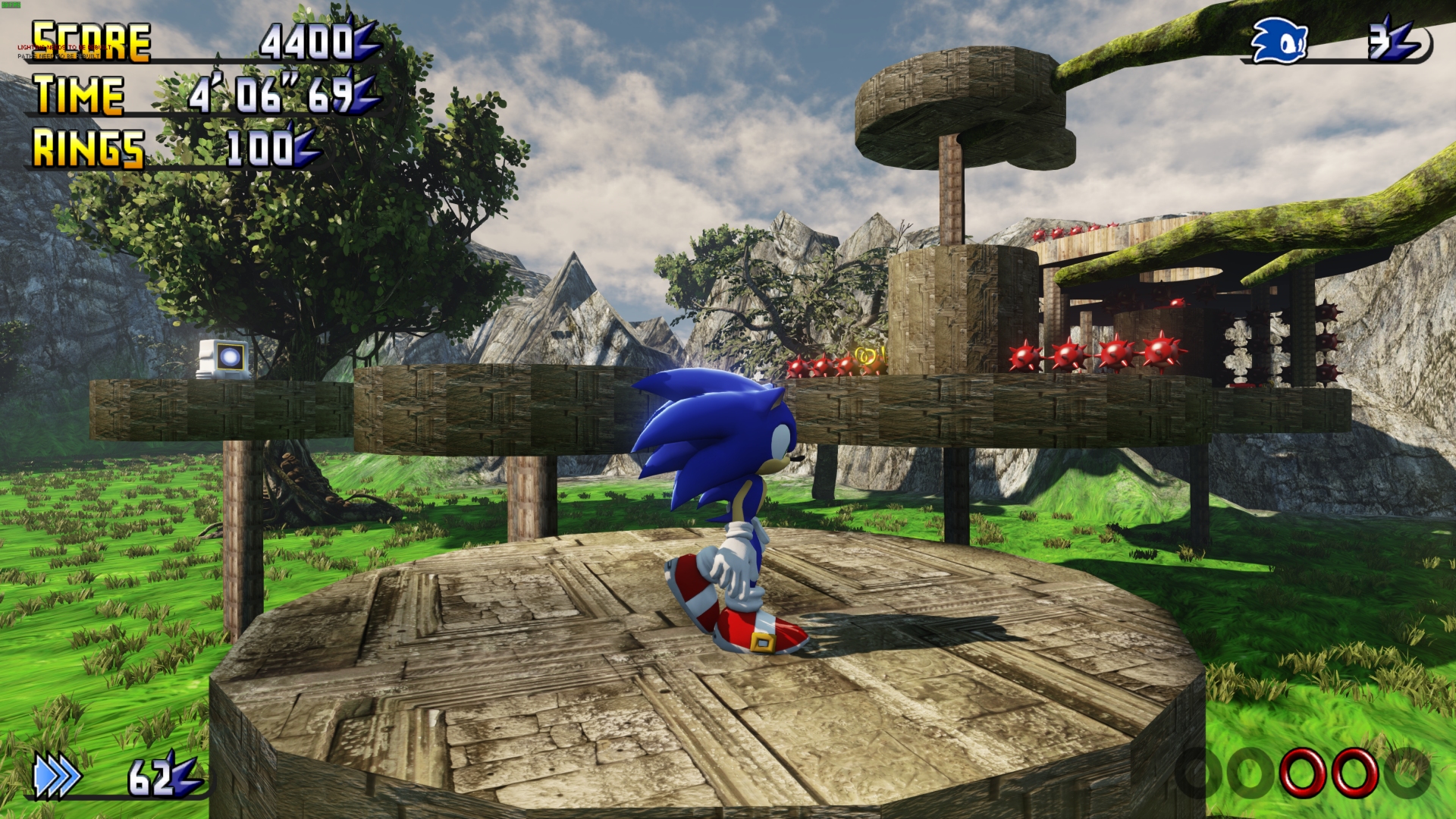 True to its name, this is literally just a collection of Sonic Zones made with SonicGDK. Nothing was done to the engine itself, it’s just somebody playing around with the map editor to make around four levels (or, at least, I played four levels). The interesting thing here is that you can actually feel this person get better at making levels as you play. Each new level seems to be better than the last, with the game’s first map being kind of ramshackle. By the time I reached the fourth map, a race across city rooftops at night, I was actually starting to have quite a bit of fun, ugly textures aside. Sure, these maps have problems with cohesion, and I ran into more than a few bugs. But we’ve all gotta start from somewhere, all gotta learn some day, and this guy seems to be picking up on things rather quickly. With some better visuals and more polish, this could be really good!

Memories of a Hedgehog 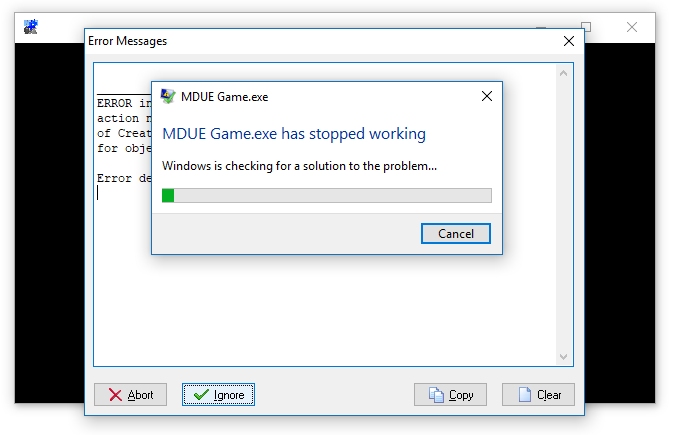 Note: a review for Memories of a Hedgehog had to be excluded because no matter what I did, the game refused to launch. The intro loading bar would fill to the max, and then the game would spit out a GameMaker scripting error about not being able to create a SWF object. Then the game would crash. Sometimes it would start up with a “runtime error at 203.” And then, also, immediately crash. I tried redownloading the DLLs as the booth page instructs, I tried running the game in all manner of compatibility modes for Windows 7 and Windows XP, but nothing worked. The game aggressively refuses to boot on my machine. Judging by the booth description page, the developer’s been having problems like this, as well. Better luck next time, dude.

See you tomorrow for the last seven games!