BE ADVISED: This title was reviewed based on a purchased retail copy of the base game, prior to the release of the Episode Shadow DLC and an expected day-one patch, and may be subject to a re-assessment pending a play-through of the DLC and application of that patch.  Within this review there are limited, minor spoilers that reveal one or two stages as well as the progression of one or two non-playable characters, necessary to convey critical points. The final score that follows does not contain such spoilers.

Let’s get one thing straight to start: Sonic Forces, a game that deserves to stand on its own merits for better or worse, is going to be compared to Sonic Mania, a game that, in any other year that did not see the release of Cuphead and Super Mario Odyssey, would be in the conversation for game of the year. That’s not fair to either title. Sega should be commended for attempting something they should have been doing since the release of Sonic Generations: Try and please everyone. Sega now recognizes how splintered Sonic fandom is, and instead of steering everyone in a direction not everyone may appreciate, Sega is affording familiar options for all its generations of players. As much as Mania successfully screams classic nostalgia, Forces on the surface evokes modern nostalgia; the high points of Sonic Adventure 2 and Sonic Colors, and clunkers like Shadow the Hedgehog and Sonic and the Black Knight.

Truth be told, from the moment I loaded up Forces for the first time until I finished the final boss, most everything about the game’s tone screamed not Sonic, but Shadow–from the clean “S O N I C  F O R C E S” typeface that serves as de facto title screen, to the haunting, emotional orchestral interludes that immediately follow in menus, to the drumbeats and overtones of war and resistance that permeate the creative narrative, to the mish-mash of chiptune, techno, and surprisingly deep bench of vocal tracks that complement the in-game dystopian environments with varying success. Forces feels like it fits more in Shadow’s world than Sonic’s, making the former’s inclusion via the Episode Shadow DLC a most brilliant move. There is indisputably a portion of the fandom who wants this, has been very vocal about it for some time, and will no doubt be satisfied with what Forces has to offer no matter what critiques follow in this review–they probably wish it was called Sonic Adventure 3 instead–and Sega has gone all-in on it. 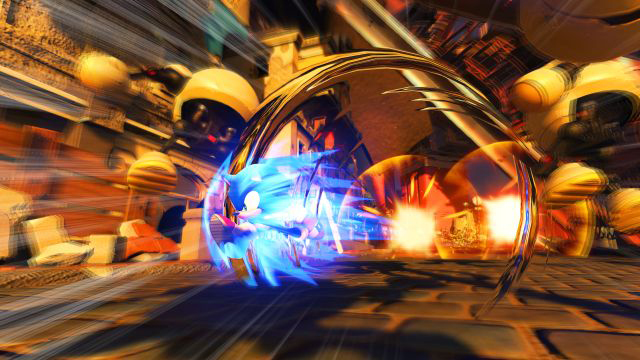 And maybe that’s the point. Sonic Forces attempts to answer a question that honestly should have been explored earlier in the hedgehog’s 26 year history: what if Eggman wins? What if he’s not the lumbering buffoon of a scientist Sonic and company have taken for granted? What if the good guys are helpless to stop his global takeover? How can a team without its leader take down a barrage of seemingly unstoppable threats? It’s not only the most cohesive, well-planned storyline Sonic’s had in years–something, again, that faction of fans has been clamoring for–but it’s a satisfying parallel to real world events, where many Western societies have seen the improbable become reality in the blink of an eye.

The story of Sonic Forces drives the game almost too well, and definitely too much. There were moments where I felt I was watching what could be the 2018 Sonic movie, with stages acting as cutscenes to bridge the gap (and even with occasional movie-like QTEs in stages!) A good player will finish those up quickly and be rewarded with more gear for their original character. Others will simply want to finish as quickly as possible and likely do so, but only after periods of intense frustration–the majority of the 30 base levels, as well as unlockable extras, are that short. In all, I finished the game respectably in about 5 hours, and I still had questions. The background behind Green Hill’s suddenly sandy landscape isn’t fleshed out well.  Chaos from Sonic Adventure appears in one cutscene and, in the base game at least, is never seen again. And for all the hype in Sega’s marketing for Infinite, his boss battles–of which there are several–only bring rare twists on a tried and true method of defeat used in several prior 3D Sonic titles. 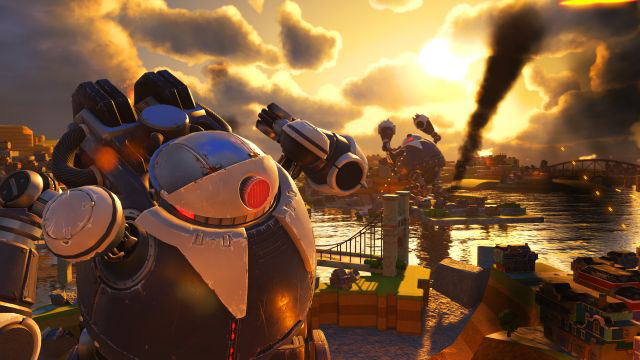 It’s not the plot holes, repetition, or even the length that bothers me. For all the criticism there has been about Sonic straying from its balance of speed and exploration in recent years, in the end, classic Sonic games had a time limit, and you need to hit that goal as quickly as you can for a maximum score. The concept is taken to a new, intriguing level in Forces, where your completion time as well as your retry rate, a new element which replaces lives, directly impacts your stage score and rank. There will be complaints about atrocious level design–and it absolutely exists here in pockets–but given the urgency Forces aims to convey, I think the quick hits work. There’s a lot of potential for great speedruns, and I’d like to believe that’s what the developers were shooting for.

Or, at least, there would be were it not for the one thing that doesn’t work, the thing that needs to work for any game to be successful: control. I’m not talking about classic Sonic’s physics being imperfect (in this case, borderline inexcusable, frankly) or otherwise deliberately trying to make a game look foolish. I’m talking about modern Sonic careening off speedways in Metropolis because there’s no good way to drift around corners. I’m talking having trouble locking on to enemies right in front of me for a homing attack, or grappling hook catches to simply advance. I’m talking about something as simple as grinding being wonky in spots and basic platforming becoming a chore, at the expense of multiple retries in later levels. It is a puzzling and very concerning step back given how this hasn’t been an issue in recent releases from Sonic Team, and I’m inclined to chalk it up to the addition of the avatar, which introduces a new set of mechanics that would confuse players both old and new. If losing this feature meant fixing the controls, I’d be all for it, because the constant switch between three and occasionally four different styles of gameplay devolves Sonic Forces into a borderline unplayable mess. 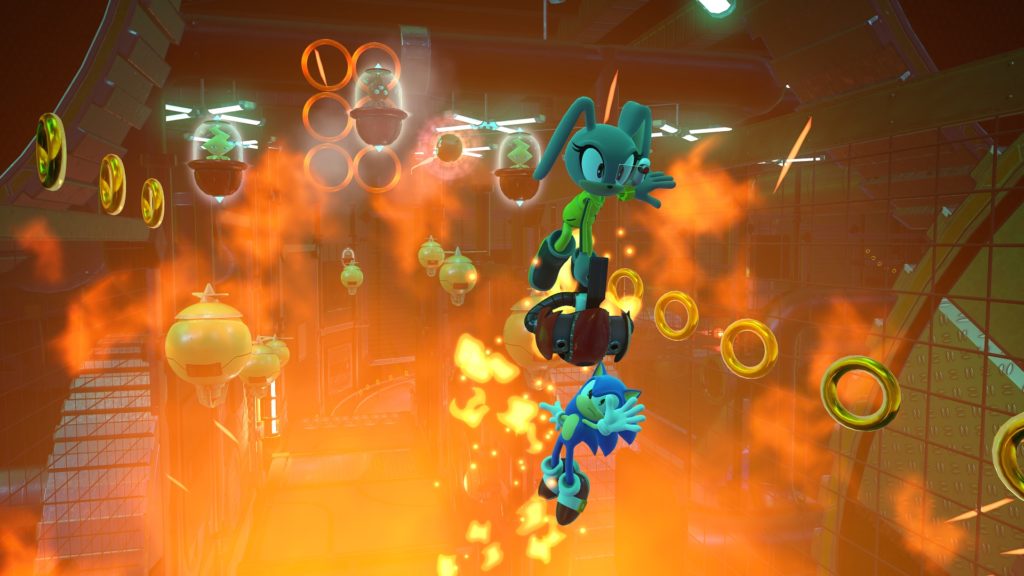 It’s a real shame, too, because the avatar isn’t a bad idea in theory, and not even that bad in execution, either. Not only creating and customizing your own character but playing it and seeing it as part of the cutscenes gives the sense that, along with both Sonic incarnations and the rest of the resistance, your creation and by extension you have an equal stake in success.  Adding Wispons, the latest evolution of the wisp power-ups, justifies the avatar’s existence, affording different and occasionally interesting ways to progress through Forces. Still, it’s not like modern Sonic didn’t already have the capability to harness that power in previous titles, and to limit him here to a boost that can occasionally be spammed across an entire level’s length without consequence feels unbalanced.

In actuality, the entirety of Sonic Forces feels horribly unbalanced and occasionally unfinished and uninspired. The easiest areas literally require a boost to win, bringing a much maligned Sonic trope to life more than anything preceding. The hardest areas never feel like a precise grasp of the game’s mechanics are required; they appear more deliberately set up for a player to fail. One can’t deny good gameplay is rewarded–there are enough daily and long-term missions and rewards from them to justify repeat playthroughs of earlier levels–I’m just not sure players will get excited enough to justify making the effort.

Visually, while Forces is a solid first outing for the new Hedgehog Engine 2 and holds up well in t he Switch’s portable mode, one of the original engine’s major flaws is front and center in the follow-up unresolved. The allowance of real-time in-game detail does not hold well against this dark, moody, war-torn landscape, to the point where I had trouble discerning essential foreground platforms separating me from a retry and a lower score and the, at times, unnecessary background pops. It was a minor issue in Generations as Sonic Team had a wider palette to work with and, therefore, could better contrast the gameplay from the beauty behind it. It’s a lot tougher to mask, a lot more obvious, and a lot more frustrating here, especially in the Jungle, Death Egg, and City stages. 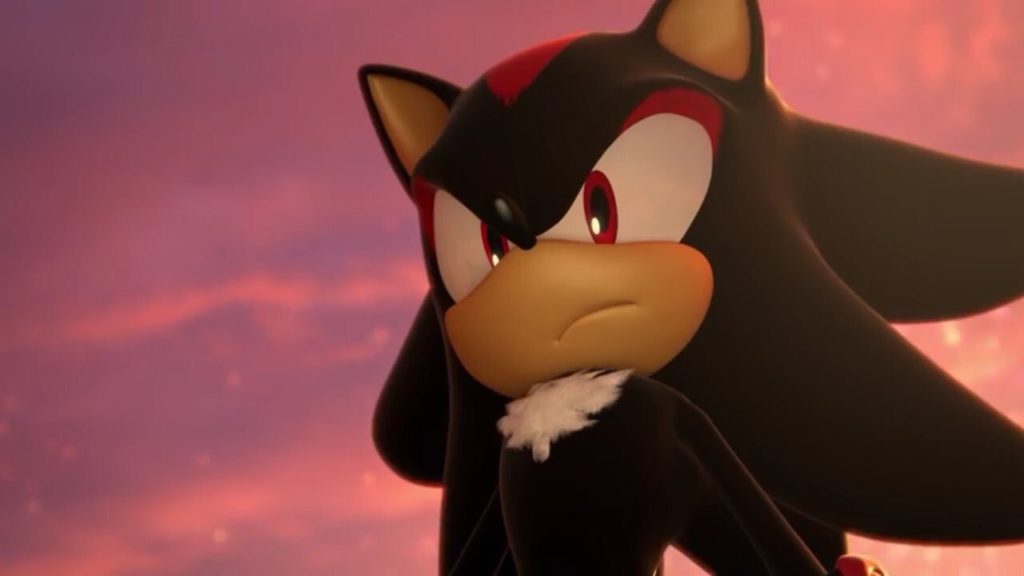 No doubt those and other severe oversights won’t stop many fans from praising Forces on one thing alone: fanservice. It’s that same reason so many overlooked what were critical, occasionally game-breaking flaws in Sonic Mania; anything can look good when viewed through the goggles of exactly what you want. The good news is that now, players who want to can don those goggles on their in-game character, and go to war for the resistance. But it won’t be long before they understand that, exactly like the all-too-real narratives Forces draws on, war is Hell. And much like in real life, there’s no reason for innocent civilians to learn that the hard way. Sonic Forces is not a subpar game because Mania exists; it is subpar because it wrongly puts its message before its experience, leaving players to pay the ultimate sacrifice of cheap deaths over and over again in an unsatisfying product that had hints of so much promise.

Final Score
2out of 5

Sonic Forces has a strong story and stronger fanservice at the expense of inconsistent and, at times, outright broken gameplay that yields only minimal dividends. Replayability exists, but only the most patient will pursue.

Nintendo To Publish Mario & Sonic at the Rio 2016 Olympic Games