Sonic’s successful mobile run continues! Thanks to the efforts of SEGA’s HARDlight studio, games like Sonic Dash and Sonic Jump have seen genuine success in the marketplace and earned some serious coin for SEGA in the process. With a brand-new Sonic adventure hitting consoles in the form of Sonic Forces, it makes sense for SEGA to produce a mobile tie-in game to keep the marketing train rolling. The company could easily have cranked out a cheap and mediocre game, but instead they’ve created Sonic Forces: Speed Battle, one of Sonic’s most polished and involved mobile efforts to date.

Speed Battle builds on the solid foundation of the Dash games, and the gesture-based control scheme is very similar here; swiping around on the screen can change your running track, jump, or duck under obstacles. The big twist this time around is the addition of competitive racing gameplay. You and three opponents will race each other on stages that have pre-determined layouts, consistent item placements, and finite ends. This means that, instead of focusing on keeping your run alive, you’ll be jostling for position and strategically planning when to deploy traps.

There’s a good variety of characters to choose from, and each has notable strengths and weaknesses; some are simply faster, while others recover more quickly from attacks. Though everyone has access to item categories like speed boosts and spawnable stage hazards, the exact items you get differ based on which racer you choose. Some hazards stop you in your tracks, others mess up your controls, and still others will destroy items in your inventory. That said, these items will rarely have any impact on your opponents if they really get out ahead of you, so if you fall too far behind, your quest for victory is more or less over. The reverse is also true; if you bust out a substantial lead, it’s likely you’ll keep that lead as your opponents tussle behind you.

All of this comes together to make the game more in-depth and involved than you might think. Characters’ stats and available items have a noticeable impact on each and every race. This can lead to some pretty intense matches, where you end up neck-and-neck with your opponents until the very end. The rapid-fire, fast-paced nature of the gameplay means you’ll really need to master the controls, and I’ve actually gotten better at games like Sonic Dash 2 thanks to Speed Battle. There a certain addictive quality to it all – if you win, you want to play again and keep winning; if you lose, you want to give it another go and stop losing!

The nature of online multiplayer games means that not every game runs smoothly, however. If you or your opponents play in a weak signal area or on sluggish WiFi, races can become choppy and confusing affairs. Items will appear to hit your opponents but have no real effect, while you may magically get frozen or zapped by items you can’t see coming. These kinds of issues are understandably frustrating, but they’re par for the course in more or less every online game, and there’s only so much that can be done to mitigate them. 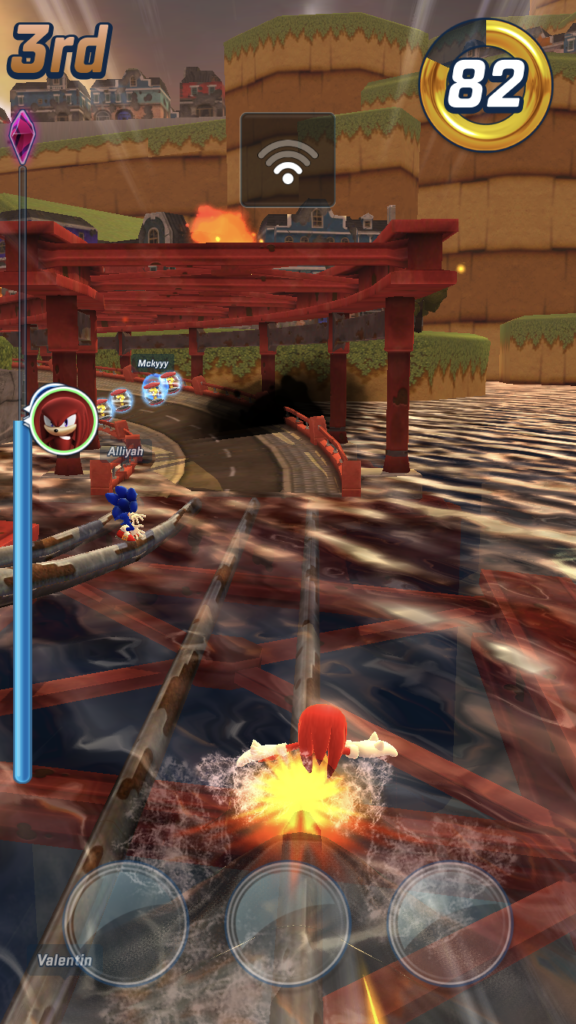 When you see that WiFi icon, wacky things might start happening.

Now let’s talk about the structure of rewards. Unlocking chests and winning races will earn points toward unlocking and upgrading the wide variety of playable characters. The game randomly chooses which characters receive points, which helps to keep your usable racer pool large and diverse. There’s no way to direct rewards toward your racer of choice, however, so if you really like the play style or items of a certain character, beefing them up is little more than luck of the draw.

Alas, as is always the case with free games, some familiar mobile game annoyances rear their ugly head here. Opening victory chests requires you to wait several hours as each one unlocks unless you pay red rings or, in select cases, watch a lengthy ad instead. Shorter ads play after every race unless you spend real money on in-game currency, which will remove, in the game’s words, “all non-SEGA ads.” That said, there’s no artificial play wall a la Sonic Jump Fever, so if nothing else, you can play for as long as you wish without interruption.

Though it’s not really the focus of the game, the presentation is impressive too. Menus and navigation assets all look clean, cohesive, and streamlined; in that regard, this is easily HARDlight’s most polished effort to date. The game features multiple stages based on environments from Sonic Forces proper, and you unlock more to race through as you win games and earn more trophy points. There are perhaps two or three music cues in total, all of which are ripped straight from the console game, and the pounding, synth-heavy tracks actually fit with the action quite well; that said, stage-specific music would have been nice.

We’ve said as much before, but it merits repeating now: SEGA and HARDlight should be applauded for their efforts in the mobile space. Rather than cheapening the brand, their Sonic titles have provided quality mobile gaming experiences for years now, and Sonic Forces: Speed Battle is no exception. Those looking for a more hardcore, competitive racing experience will likely find its design unaccommodating, but for everyone else, Speed Battle is an engaging and robust racer worth sinking some time into.

Final Score
4out of 5

A wealth of unlockables gives Sonic Forces: Speed Battle more depth than you might expect, and engaging multiplayer gameplay will keep gamers of all dedication levels coming back for more.

Another Look Inside the Hedgehog Engine