Sonic’s big return to comics offers a familiar flare that hints at a new beginning.

In writing about Sonic the Hedgehog’s history as a comic book star, it’s hard not to focus on the past. I could write pages worth of material on how I feel about the Shattered World Crisis, about the reboot, about bitter lawsuits and years of mismanagement and all the baggage that once came with being a fan of Sonic’s exploits on the page. IDW’s fresh start for Sonic begins with what feels like a vague gesture to that baggage. Sonic and Eggman have duked it out for years, until a recent battle gave the evil scientist control of vast portions of Sonic’s world and nearly snuffed out the light of our heroes for good — until the tide turns and Eggman suddenly vanishes. There’s an undercurrent, a tacit recognition of where we’ve been before, in order to set the stage for what exactly a new era can do. With Eggman, that battle, and all of his sordid history in comic books behind him, Sonic #1 brings a character with nearly 300 issues behind him right back down to earth. 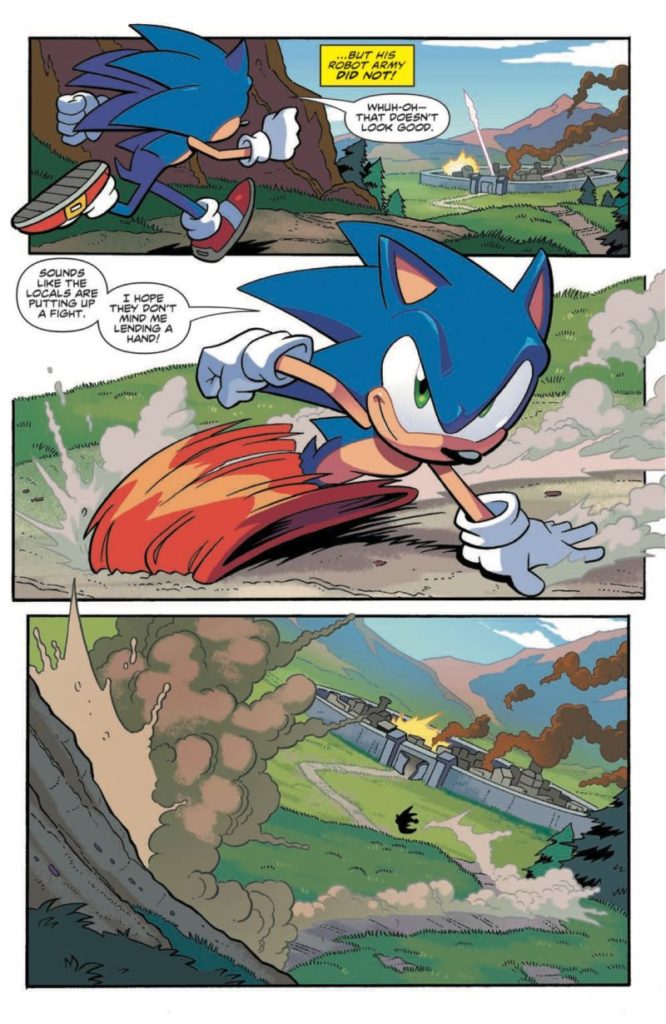 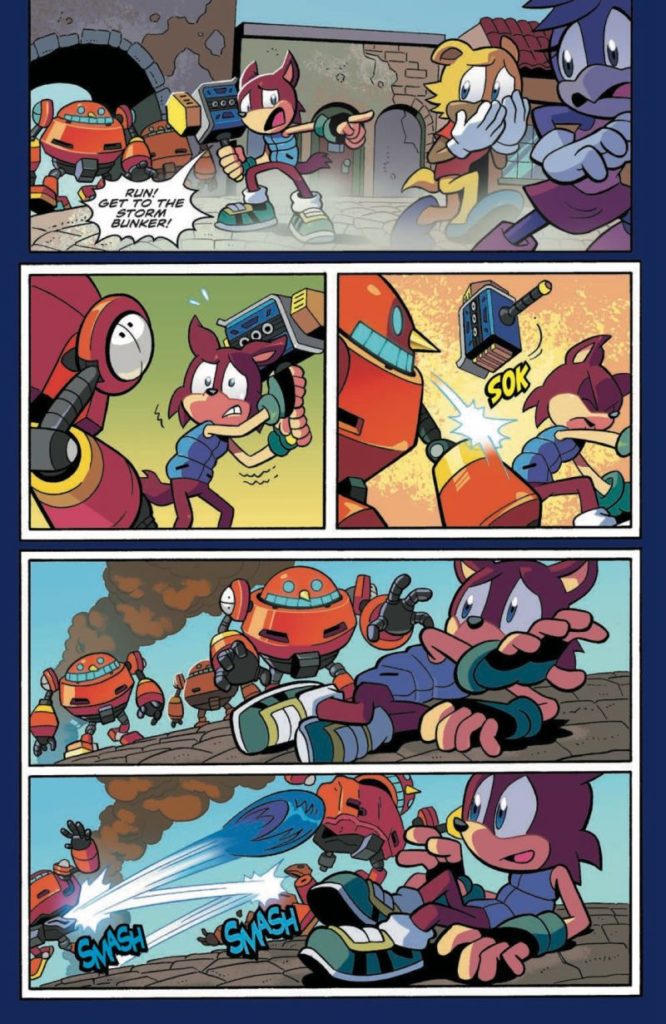 To that end, IDW’s first arc, Fallout!, starts with a back-to-basics story about two best friends fighting bad guys. Eggman may have disappeared after his last major battle with Sonic, but his army of badniks has persisted in its attacks. Sonic swoops in to offer assist a group of militia members in an unnamed town against an attack from an army of Egg Pawns and Motobugs. Despite being a #1, there’s no real attempt at explaining who Sonic is or where he’s come from. That recognition of the past flows through to this introduction — chances are, if you’re reading a comic book about Sonic the Hedgehog in 2018, you know exactly who he is.

This reintroduction to the character seems fitting. He busts some badniks with his signature style, winks at a girl and makes her fawn over meeting “*the* Sonic the Hedgehog”, and quips at a big badnik before getting an assist from a familiar face. There’s an assumption that you’ve either read these books before or played one — if not many — of the games. You know who Dr. Eggman is, right? You played Sonic 2, you know who Tails is? Great! I applaud this decision. I don’t think it’s far-fetched to assume that readers picking up this book just *know* who these characters are. I’m not quite sure how well these assumptions will hold up if we begin seeing characters from newer or less popular entries in the franchise, but as a starter book aimed at fans of the games in general, it feels natural.

This arc’s opening pages and constant references to a past conflict seem to be hinting at the events of Sonic Forces. After joining Sonic in a quick battle — drawn with an wonderful sense of speed and teamwork by the talented Tracy Yardley — Tails himself seems to confirm this. Eggman’s forces were organized and meticulous, taking control over the world. There’s no direct indication that Sonic was captured by Infinite and tortured for 6 months, or that Eggman used the power of the Phantom Ruby and Infinite to take over the world; but there’s a drawing that looks suspiciously similar to the heavily fortified Imperial Tower, and an allusion from Tails to Sonic being caught off-guard and hurt in some way.

Whether this arc is supposed to tie directly into Forces or not, this vague past provides solid framework for the new story. From a storytelling standpoint, it’s straightforward. Eggman’s forces were scattered after a defeat, but the attack repelled by Sonic and Tails in issue 1 is unsettlingly well-organized, which leaves Tails concerned. That framework provides a compelling reason to show the depth these characters can have as well. Sonic runs the gamut from cocky and excitable to quietly nervous and concerned, while Tails plays a solid emotional foil as usual. Tails’s quiet concern on page 20 is notable in particular, allowing readers new and old to revel in how much these characters care about each other.

It feels refreshing to have a return to that sort of storytelling. Ian Flynn loves these characters and captures their personalities on the page in a really special way. He had a way with these characters at Archie and this first issue of IDW’s take on the Sonic universe shows that the new team continues to put personalities first. This issue contains some of the best Sonic writing we’ve gotten since the Shattered World Crisis. Sonic and Tails come off as the old friends that they are — they care about each other deeply, and it shows in every interaction they have throughout this issue. 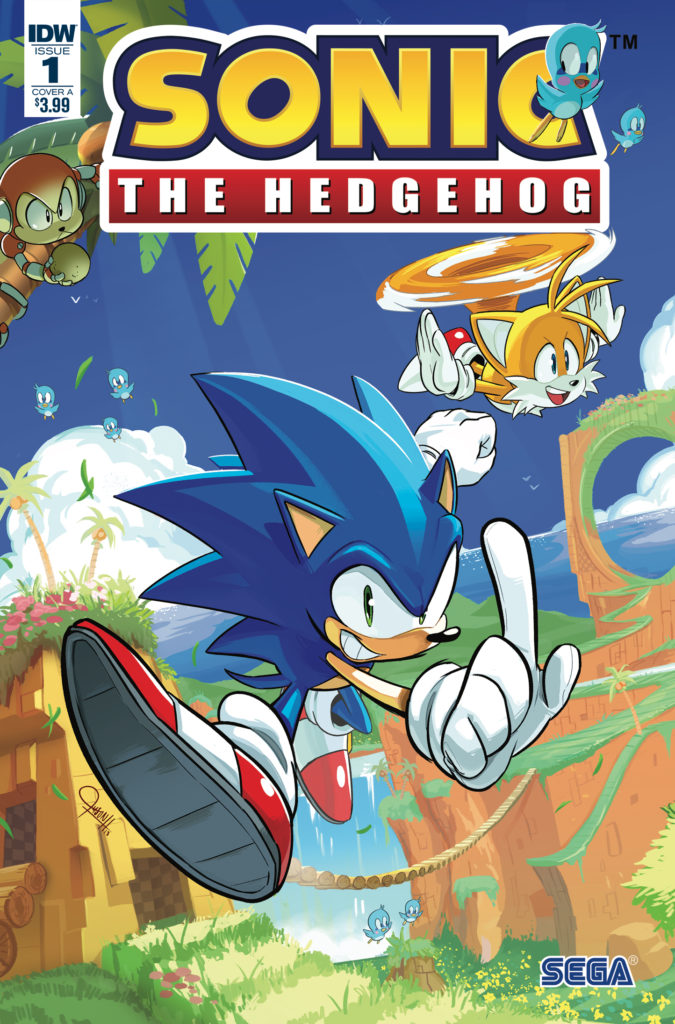 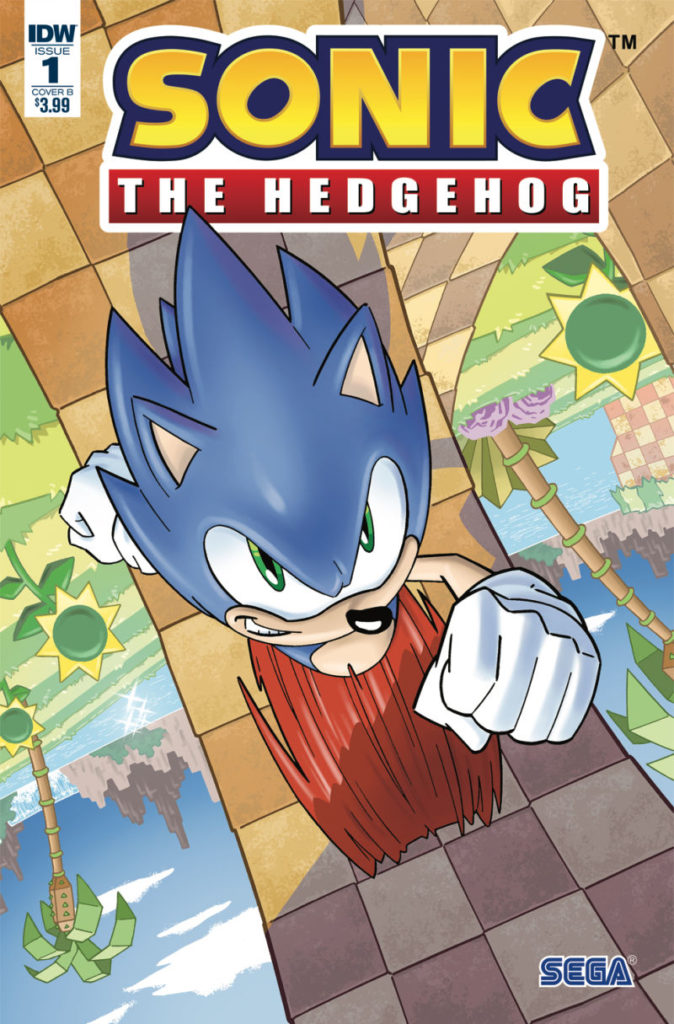 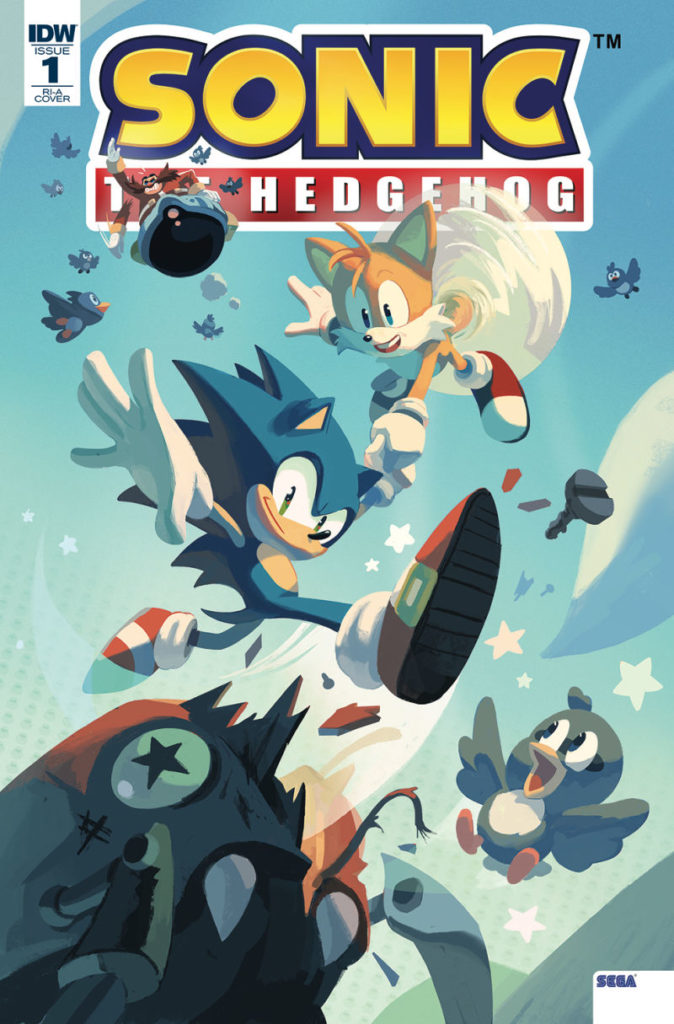 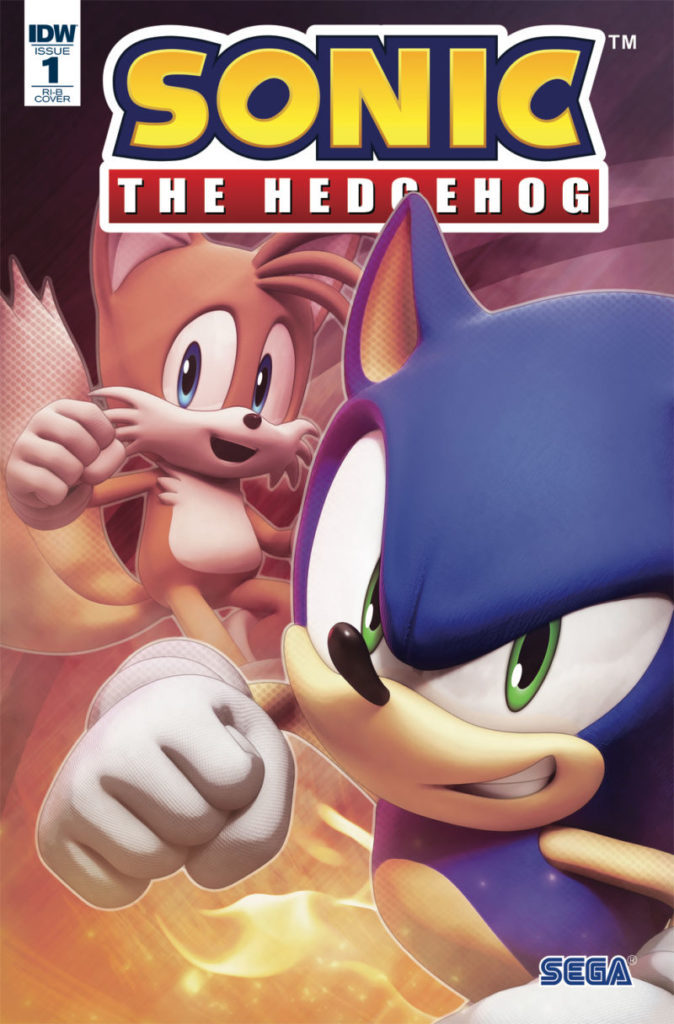 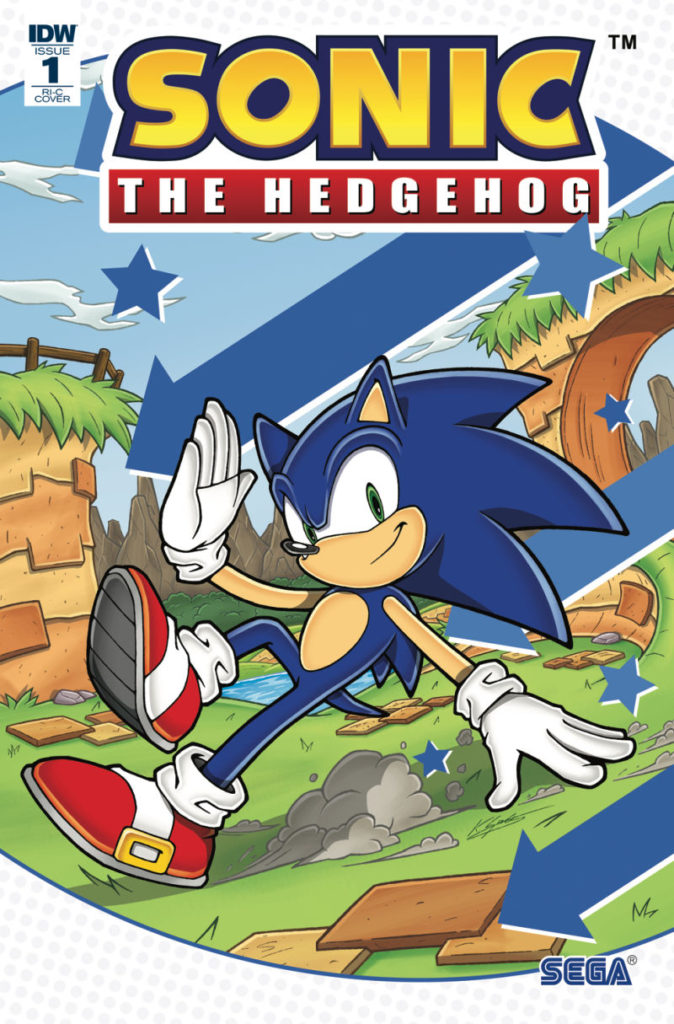 On the subject of talent, this issue’s got a great staple of creatives on board. In addition to writing from the incomparable Ian Flynn, Tracey Yardley’s return to Sonic is more than welcome. As you’d expect from Yardley, the pencils are full of character and style, with some bang-up action scenes and incredible expressions. A return from colorist Matt Herms lends itself well to that familiar feeling, with a sheen that pops right off the page as well as it did during the Archie days. Inks are provided by a two-person team, one a Sonic veteran (Jim Amash), and one a well-established newcomer (Bob Smith). Sonic #1’s main cover features art by the ever-incredible Tyson Hesse, which will eventually connect with the next three issues into one large poster; though, if you asked me, I’d say the best cover comes from one of the newbies. Despite the welcome familiarity of Sonic’s old talent, I do look forward to seeing contributions from new creators. In particular, artist Nathalie Fourdraine, a brilliant discovery on behalf of editors Joe Hughes and David Mariotte, delivers some incredible art on her variant covers for issues 1-4. I’d love to see Fourdraine be given a chance to do interior work as well. A new era should rightfully bring along some fresh takes, and with IDW’s healthy stable of talent, I won’t be surprised if we see something really exciting in the future.

The issue closes with a hint at some grand plan and an allusion to Sonic’s reunion with Amy Rose in issue #2, plus some cute art and letters from fans. For those curious, there isn’t a humorous mini-comic here as there would have been in the Archie days, and I’m really glad to say that’s my only real complaint here. New readers might be caught off-guard by the Forces allusions, but in my view it works well enough as it is. It’s not the best single issue of Sonic I’ve ever read, but then I didn’t expect it to be; it’s not the best #1 I’ve ever read either, but after the complications of the last couple years, it feels like the fresh start that Sonic deserves. Those paying attention to the solicitations know that all of Sonic’s friends are going to get a highlight issue like this, which excites me. I’m very glad we’ll get a chance as readers to become reacquainted with each of these characters through the eyes of our hero in a way that lets their relationships shine. I look forward to reading these issue as part of a larger arc rather than as a standalone book — given Ian Flynn’s penchant for planning stories out years in advance, I’m sure this book’s best days are yet to come.